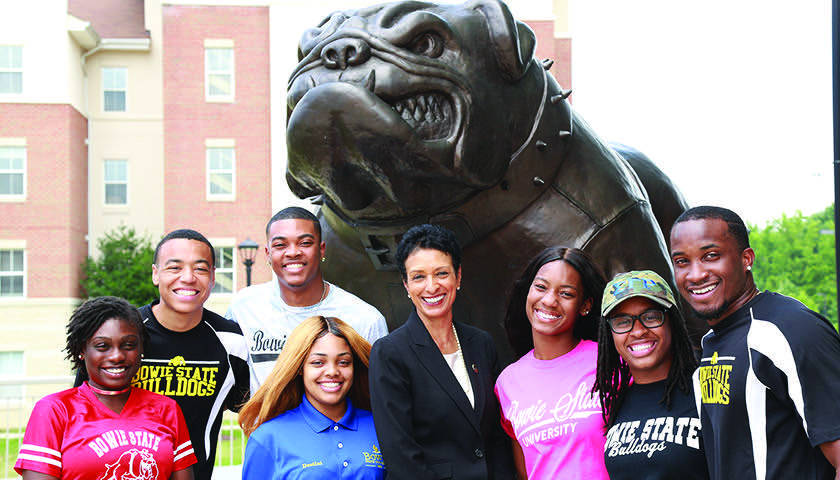 In her historic role as Bowie State University’s first female president, Dr. Aminta Hawkins Breaux said that she’s ready to lead the top 25 HBCU into the school’s next phase of growth and development.

Following the celebrated legacy of Dr. Mickey L. Burnim, the former BSU president who served the institution for nearly 11 years, Breaux said that she is thrilled and honored to accept the leadership role.

“When I look at issues that African-American women have faced in this country, it makes me realize how very proud I am to get to this point,” Breaux said about serving as BSU’s first female president. “I have received so much positive feedback from faculty, students and staff and recognize that this is a huge responsibility that is very exciting and I wholeheartedly serve in leadership role with great distinction.”

Though Breaux has only officially been in office since July 1, the former vice president for advancement at Millersville University in Pennsylvania has already started to outline new initiatives.

Heavily involved with community building, Breaux noted that she wanted to enrich the neighborhoods surrounding the university while preparing students for the ever-changing workforce.
“Partnerships are going to be extremely important. We want to reach out to our business leaders and the rest of our community and help them see the value that our students and faculty bring to this area,” Breaux said.

Though the university is fully-equipped with state of the art facilities including a Fine and Performing Arts Center that opened in 2012 and an elaborate Center for Natural Sciences, Mathematics and Nursing that opened this year, Breaux said this is just the beginning of a long-term focus on K-12 institutions and community colleges, as well.

“I envision our students mentoring and bringing different K-12 and community college students to our campus,” said Breaux. “With state of the art facilities, it is always good to let students see other role models at higher levels doing great things. You know, you have to give students that goal and let them see that they can get to that point.”

In addition to her work at Millersville University, Breaux was also dean of students at the University of the Sciences in Philadelphia from 2000 to 2008 and assistant provost of Drexel University from 1998 to 2000.