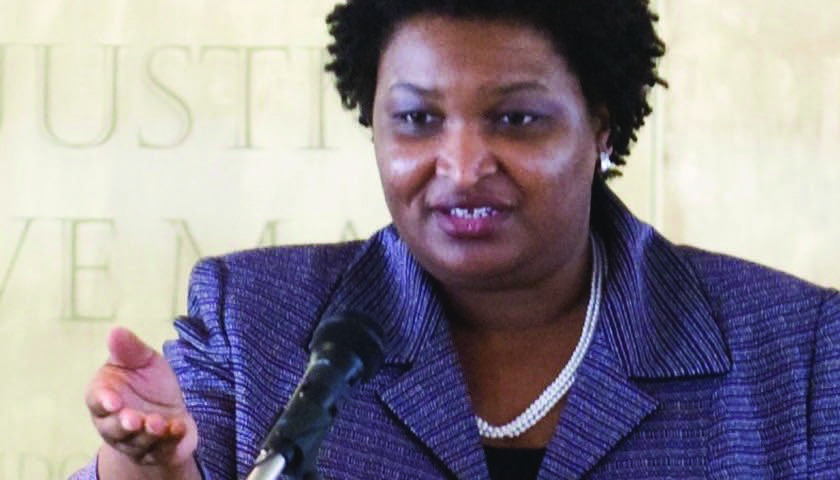 The GOP has held a tight grip on the governor’s mansion in Georgia since 2002, when Sonny Perdue, promising to restore the Confederate battle cross to the state flag, defeated Democratic incumbent Roy Barnes to become the first Republican to hold the position in the Peach State since Reconstruction.

But, a motivated Democrat is looking to change that and shatter a glass ceiling that has never been broken in the United States.

“It’s a very humbling experience to know that, if I win this election, I would have achieved something that Black women, as far back as Barbara Jordan and Shirley Chisholm, have fought for.

Not necessarily the same job, but transforming how we think about leadership in America,” Abrams said in an interview with the NNPA Newswire.

“Physically claiming that mantle of leadership and holding it signals that anything is possible and we can redefine what leadership looks like and who we can lift up.”

Abrams, 43, said she’s undaunted by the stranglehold the GOP has had on the governor’s mansion for the past 15 years.

She said Georgia will likely be a majority-minority state in the coming years which provides Democrats more of an opportunity to claim the seat next year.

Abrams noted that Democrats have gained steam, citing the 2006 race where the party lost by nearly 400,000 votes but significantly closed the gap during the last election in 2014, coming within less than 200,000 votes of victory.

The New Georgia Project, a non-partisan voter registration group, that Abrams launched three years ago, may also help her candidacy.

“It’s the single largest voter registration effort in recent memory in Georgia and we have been able to register more than 200,000 people of color in Georgia to vote,” Abrams said. “I just don’t talk, I have a record that we need to talk about.”

The Guardian reported that, Abrams is “One of six children born to Methodist ministers in Mississippi who later followed their work to Georgia, Abrams’ family struggled to fight off poverty, relying at times on government assistance.”

As a student at Avondale High School, Abrams was hired as a typist for a congressional campaign in high school, where her tweaks to a campaign speech she was typing up were deemed so good she ended up being hired as a speechwriter at 17, The Guardian reported.

And, as she seeks to become the first female Black governor in history, Abrams has already accomplished a series of firsts including being the first person in her immediate family to buy a house and the first to become a lawyer. She also earned the distinction of being the youngest deputy city attorney in Atlanta’s history.

When she ascended to the position of house minority leader, it was the first time that a person of color or a woman had held that job in more than 200 years, according to The Guardian.
Incidentally, her sister, Leslie Abrams, is the first Black woman to become a federal judge in Georgia.

“Georgia is a fast-changing state with demographic parity,” Abrams said. “But, I’m running to be the governor of all Georgians, because all Americans deserve leaders who care about them and who don’t work only for the privileged, but for justice.”

That’s important, because “Poor doesn’t care what color you are,” Abrams said.

With vast experience in the public, private and nonprofit sector, Abrams said she’s poised to lead her state. Abrams said that she has created several small businesses, published eight novels and, one of her latest ventures, was to make sure Black-owned small businesses had access to capital.

Her campaign is based, in part, on a vision that every Georgia resident deserves the freedom and opportunity to thrive, but Abrams said that too many people are being left behind or left out.

Her vision for Georgia is one she said fosters prosperity where everyone has the opportunity to succeed, not just survive.

“We have the ability to build a stronger, brighter Georgia,” Abrams said. “It is time for transformative leadership, powered by all of us.”