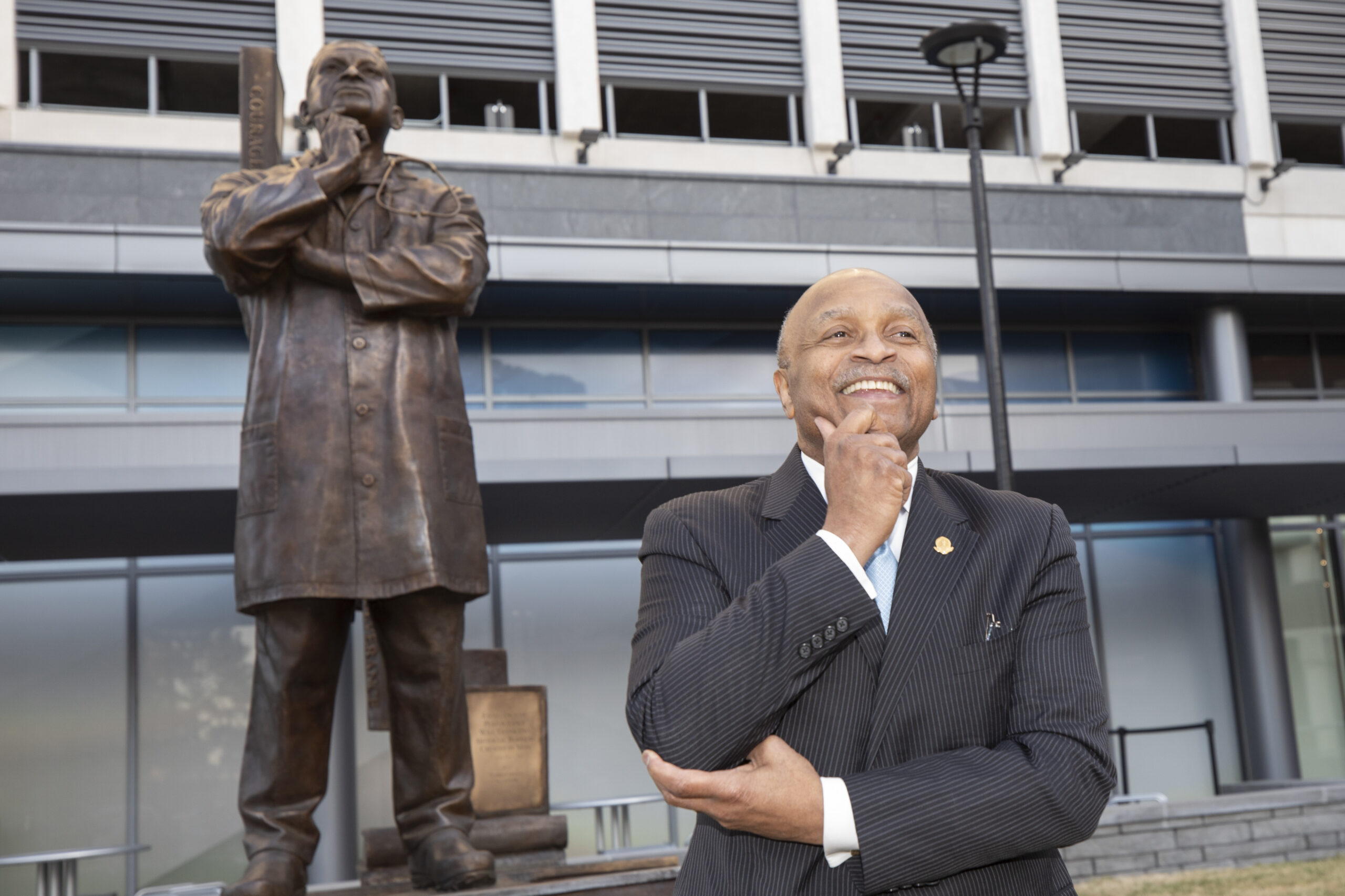 The 9-foot-tall, larger-than-life art is symbolic of the profound impact Dr. Britt, a native of Suffolk, has had over his long and illustrious career, said Alfred Abuhamad, MD, Interim EVMS President, Provost and Dean of the School of Medicine. in a press release.

“Dr. Britt has devoted his entire professional life to addressing healthcare disparities, mentoring and serving others and delivering unparalleled patient care,” Dr. Abuhamad said. “Our hope is that each person who passes the statue will not only appreciate the work of this talented artist but understand the magnitude of Dr. Britt’s lifelong dedication to healthcare, research and education.”

Sculptor, world-renowned artist Mario Chiodo, portrays Dr. Britt in a classic contemplative pose. The statue stands in the middle of railroad tracks that hint at his beginnings in a once segregated community; behind him a towering stack of books in the form of the DNA double helix signify his success in medicine.

Dr. Britt said he is humbled by the statue on the lawn of Waitzer Hall. His hope is that it will serve as a source of pride and inspiration for the entire campus community.

“When people walk by, I hope they think about perseverance and excellence — the fact that

you have an obligation to make your society better,” he said.

A graduate of the University of Virginia, Dr. Britt joined the EVMS faculty in 1986 after earning his medical degree and a Master of Public Health degree from Harvard. He is the Edward J. Brickhouse Chair in Surgery and has served as Chair of EVMS Surgery since 1994 and Vice Dean

for Clinical Affairs since 2021.

For the first 25 years of his career, Dr. Britt traveled to Suffolk every Tuesday to see patients, including some of his former schoolteachers, who couldn’t make it to Norfolk. The trips, he said, were a way for him to both stay connected with his past and better understand the

current needs of the community.

“As a young man, I looked around my community, the segregated Jim Crow South, and I saw real struggles,” Dr. Britt said. “If my family members had to go to the doctor, they packed a lunch because getting to that appointment, being seen by a doctor, getting home — it would take hours. I knew something was wrong. The issue of healthcare disparities was our biggest challenge. It’s what drew me into medicine.

“We still have healthcare disparities,” he added. “To be honest, that’s what keeps me in medicine.”

Dr. Britt has earned many of the medical and surgical community’s highest honors and has served in some of its most influential roles, including President of the American College of Surgeons (ACS). Among other achievements, Dr. Britt was the first EVMS physician to be named

to the prestigious National Academy of Medicine. He also was the first Black surgeon to receive the ACS’s Lifetime Achievement award — an honor so prestigious that it has been given to only four other surgeons in the organization’s 108-year history.

The terrace on which the sculpture of Dr. Britt stands has been named the L.D. Britt, MD, MPH Terrace.