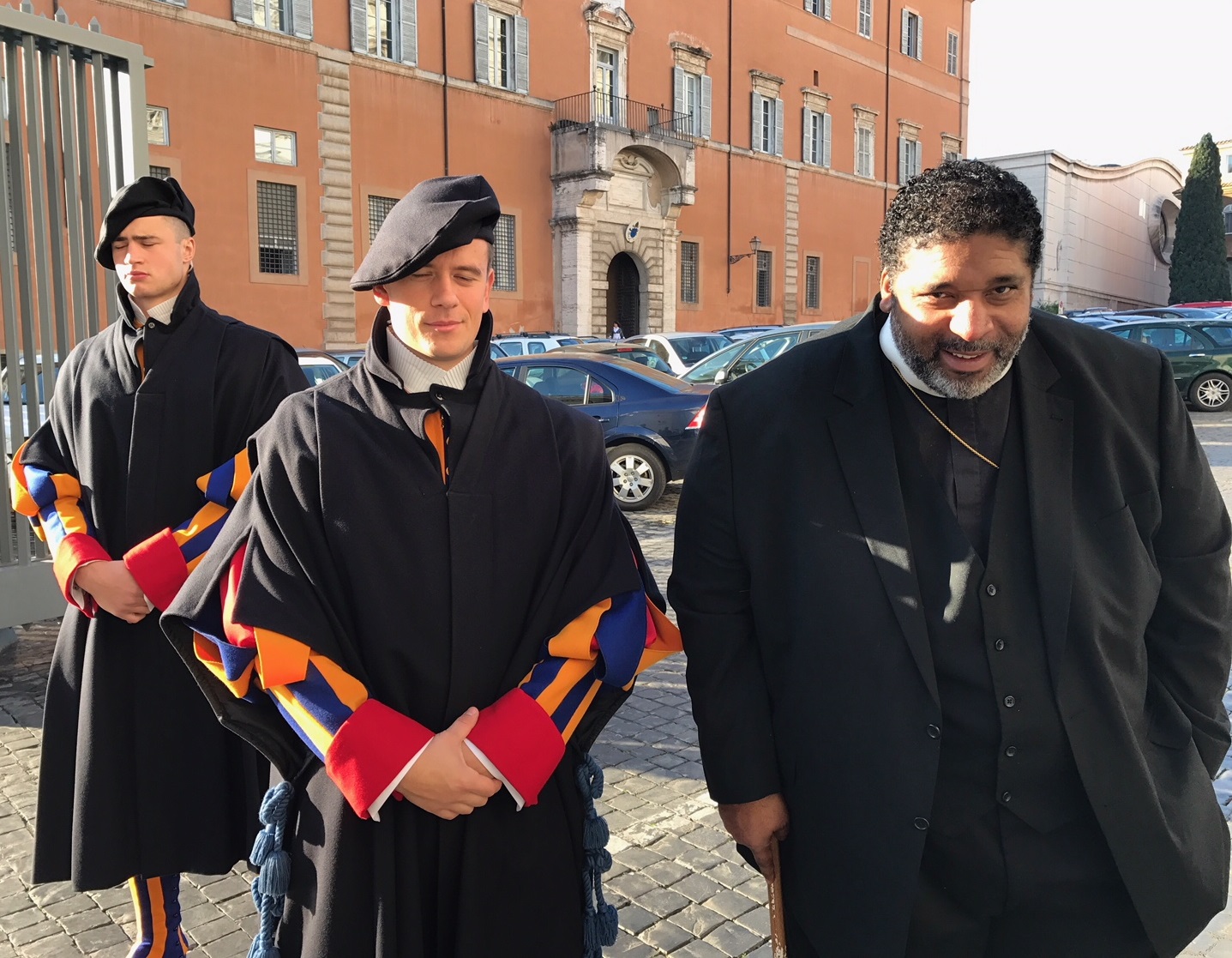 Rome, Italy is over 4,600 miles away from Raleigh, NC. But when it came to “Moral Mondays,” the massive yet peaceful demonstrations held in North Carolina’s capital city and led by the former president of the NCNAACP, no distance was too far as far as admirers attending a recent international conference on labor at the Vatican were concerned.

“I was … surprised by how many leaders from around the world had been inspired by Moral Monday, the moral revival last year, and the Poor People’s Campaign plans,” Bishop Dr. William Barber, leader of the social justice group, “Repairers of the Breach,” said by text from the Vatican shortly after the visit.

Dr. Barber was one of 300 participants from around the world attending the conference which addressed the conditions of working people, and the working poor on Thanksgiving.

Representing the upcoming Poor People’s Campaign in the United States, Dr. Barber’s social justice reputation from the 12 years he led the NCNAACP preceded him, with an invitation already given him to attend and preach at another world gathering about labor rights and the poor in Liverpool, England next June. He has also been invited to Brazil next year.

As a birthday present, Dr. Barber took his mother, who had turned 84 the week before, along with his wife and one of his sons, all part of an eight-person delegation.

In an exclusive telephone interview from Washington, DC, Dr. Barber recalled two “long, intense eight-hour days” of deeply committed religious and labor leaders working together. From countries like France, Sudan, England and others, Dr. Barber said he was greeted warmly by all.

Even the Vatican guards saluted him because of his title of “Bishop.”

During his presentation at the conference, Dr. Barber said, “Rightfully, the Pope has noted at the start of the 21st century that religious leaders must play a leading role in the struggle for justice in dialogue with all social and political actors. We must articulate a way of thinking that brings together the complexity of the current situation and proposes an action strategy for the construction of a just society. Not only is democracy at stake, but the wellbeing of world itself.”

Later in his remarks, Bishop Barber continued, “I believe Pope Francis’ call for a moral vision of the common good connected to a call for solidarity within the labor union economy and ethos is most important.

“I join you today as President of Repairers of the Breach and Co-chair of the Poor People’s Campaign: A National Call for a Moral Revival in the United States. We have identified five areas – five moral diseases that must be addressed if we are to be a people able to address the common good, promote the general welfare, and ensure the common defense, with liberty and justice for all.

“We must address systemic racism, systemic poverty, ecological devastation, the war economy, and the immoral narrative of extreme religionism.”

Before he left, Dr. Barber was satisfied with how his presentation was accepted by other religious and labor leaders.

“Many of the points that we raised were in the final document produced by the conference as a guide to the way forward,” he texted.

And what about that much anticipated Thanksgiving Day meeting between Dr. Barber and Pope Francis that was scheduled during the two-day gathering? It got cancelled at the last minute,” Barber says.

Even though Dr. Barber wasn’t able to personally meet the Pope as he had hoped, he was able to present one of the Pope’s cardinals with gifts for His Eminence from the United States – a small stone from the home of North Carolina civil rights leader Ella Baker, and sand from the Rio Grande [River] where Barber walked with families traveling to see relatives from Mexico they had not seen in years.

Beyond the conference, if there was one consolation, Dr. Barber wrote, it was that one of the cardinals [from Ghana] he exchanged personal information with promised to visit with the bishop in North Carolina upon his next visit to the United States.