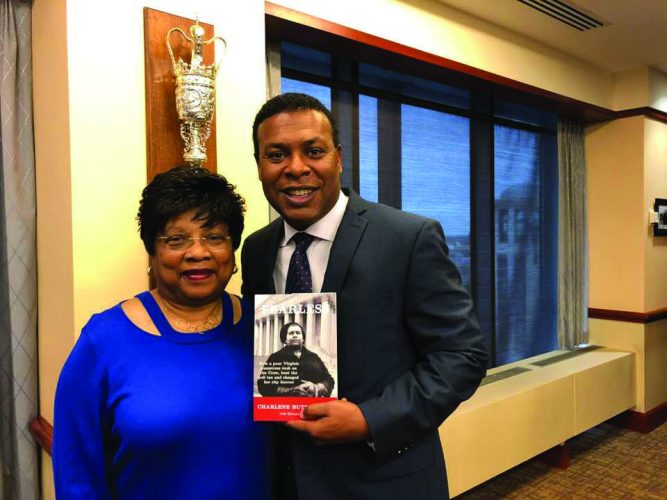 Charlene Butts Ligon made a homecoming last week to promote the book she wrote about her famous mother, during the weekend her Norfolk hometown was observing the birthday of Dr. Martin Luther King, Jr.

Late last year, “Fearless: How a Poor Virginia Seamstress Took on Jim Crow, Beat the Poll Tax and Changed Her City Forever,” was published about her mother Evelyn Thomas Butts, whose work symbolized the theme of King’s movement.

Ligon did an admirable job of crafting the easily readable book (270 pages) that I enjoyed while hibernating during the Great Blizzard of Hampton Roads of 2018.

Using personal materials from family records and recollections, archival material from Norfolk State, memories from Butts’ political allies, city and state records, and media accounts from the New (Norfolk) Journal and Guide, Virginian Pilot and other sources, she has done her mother proud.

As Chief Reporter for the GUIDE for 30 years, I have managed to secure a good working knowledge of the state, regional and local history. But the depth of Ligon’s book filled in many gaps.

In each of the well-sequenced and researched passages, she uses history from the Colonial period onward to put her story into perspective to assure a reader does not get lost.
Even those who are not history nerds (such as I) will easily walk through the life of Evelyn Thomas Butts from birth in hard scrabble Norfolk, through her busy life as a civic activist, political organizer, and fuel for a political movement in Norfolk.

Ligon’s book details the life of her mother from the time she was born Evelyn Thomas in 1924, in a small apartment in Norfolk on Union Street, where the Norfolk City Hall complex sits and where slaves were once bought and sold.

The family spent several years in New York City, where her father, an Edenton, North Carolina native was one of the laborers who built the Empire State building in 1928. Before New York, her father found work at the nearby naval bases, where many men worked to feed their families and generations beyond.

Butts began her public service seeking to advance the needs of her family in their small home in the Oakwood section which was inhabited mostly by Blacks. It was adjacent to not-so-friendly Whites living in the Coronado neighborhood which enjoyed running water, sewer lines and paved roads. Blacks nearby did not in the late 1940s.
Her mother and other civic leaders eventually worked to secure better conditions for their community.

Evelyn Butts worked as a seamstress, a domestic for White familiies, and as a cook in department stores where she could not sit and eat.

Butts became a force not only in the Oakwood Civic League, but also the Norfolk NAACP.

Evelyn Butts was not a formally educated woman, but this was not an impediment as she engaged and won respect from the Black and White civic and political elite.

Ligon captures the intriguing life of her mother and many of Norfolk’s political and civic leaders from the 1940s until her death in 1993.

Ligon describes her family’s personal encounters with Jim Crow and how it was used to segregate and marginalize the Black community and their children.

She reveals some details about the Black community’s war to challenge and dismantle school desegregation, using as a weapon the Norfolk 17. Ligon was in elementary school when this dramatic chapter unfolded, witnessing events from an inquisitive child’s view of the world.

Her work with the NAACP is how she met Attorney Joseph Jordan, who was relegated to a wheel chair due to injuries sustained in the final days of WWII. But Jordan had a determined mind, a law degree, and opened a legal practice. He fought civil rights cases locally and nationally and would be the legal mind behind the suit which killed the poll tax.
Fueled by the Concerned Citizens, a Black political action group, Butts’ political activities with Jordan and others helped him become the first Black post-Reconstruction Norfolk City Council member.

The Goldenrod Ballot produced by the Concerned Citizens caught the eye of the White Democratic moderate political elite, enabling them to secure power on council, the state legislature, and the U.S. Senate, as in the case of Chuck Robb, a close friend of Butts.’

Butts became a force in the Democratic Party.

She also secured seats on important local panels, such as the Norfolk Redevelopment and Housing Authority (NRHA). She often clashed with her colleagues, but won respect and praise for her efforts to help Blacks secure resources for their neighborhoods and access to development opportunities.

Ligon’s book describes her mother’s ability to help the politically ambitious fulfill their dreams; however, Butts’ ambitions were frustrated.

Rival forces led by Bishop L.E. Willis and his Rainbow Coalition crippled the Concerned Citizens, according to the book. At the same time, it took its toll on the political and physical health of Mrs. Butts.

The book looks at how political and personal karma took its toll in the end on those who erected barriers to Butts.

For residents and visitors to Norfolk, the only reference to her life are the lighted signs on several Hampton Roads Transit (HRT) buses, destined for the Evelyn T. Butts Avenue transfer station off Little Creek Road. It is near Oakwood, and the street where the Butts’ family home once sat and was the base of operation for her during her career.

Once you read this thoughtful and information-filled book on her life, you will be grateful for her daughter’s dedication to share not only her mother’s legacy, but also, the love she devoted to her research in each sentence, page and chapter. I know I was!