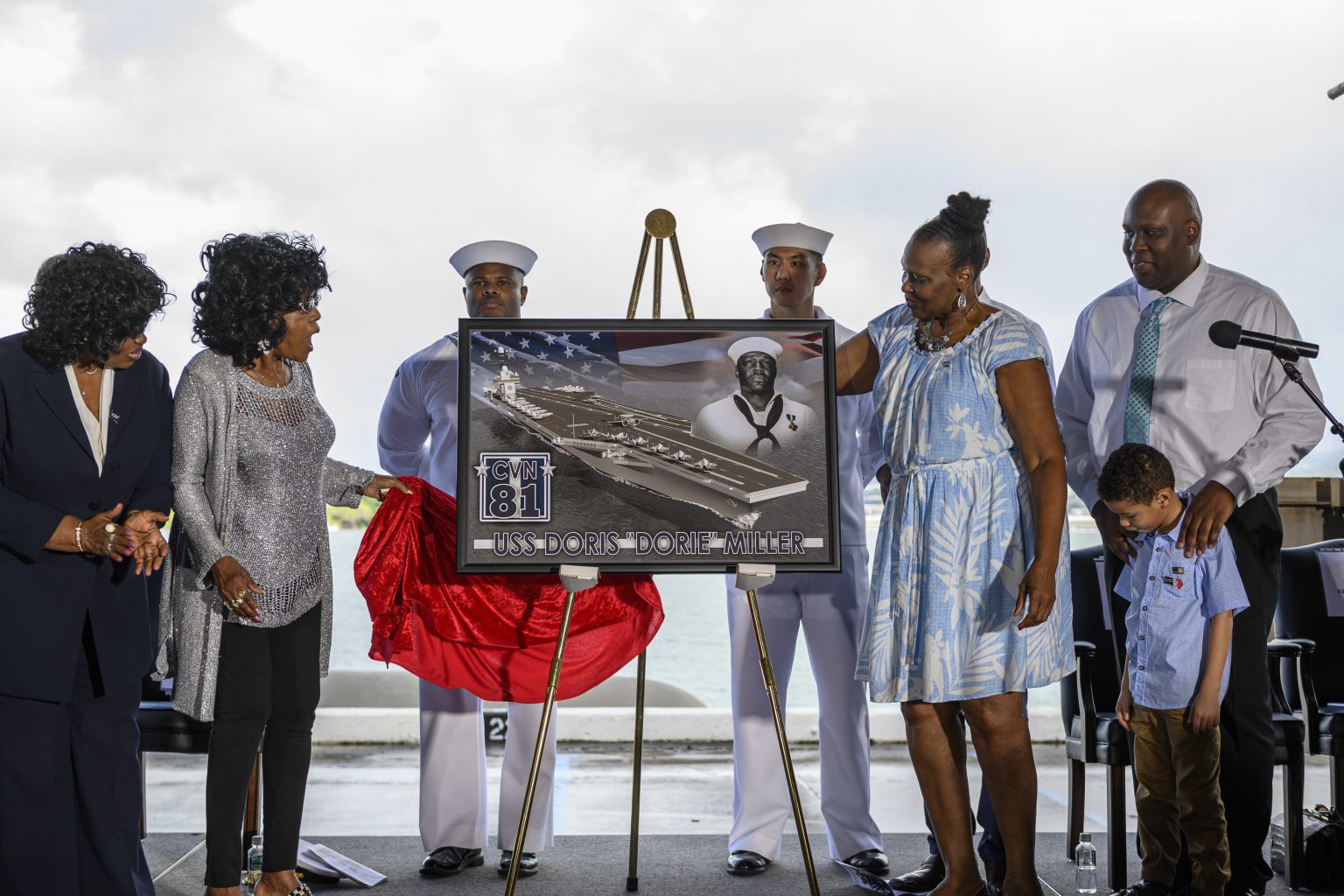 Once The Navy Denied He Existed; Now His

Name Will Be Among Presidents On A Carrier.

Eighty years ago, on the morning of Dec. 7, 1941, the Japanese attacked the Pearl Harbor Naval base, in Hawaii.

The attack lured the United States into WWII. Japan, its German and Italian allies were waging WWII in the Pacific and Europe against democratic nations.

Ironically, at the same time, the U.S denied millions of African Americans the benefits of democracy using Jim Crow segregation to subjugate them to second-class status.

Jim Crow was exemplified by the U.S. Military. Black sailors could only be Mess Attendants, serving officers their meals and cooking white enlisted men their daily rations.

As the battleship was sinking, the 22-year-old sharecropper’s son helped move his dying captain to better cover.

Days before he watched as white sailors trained to fire the 50-caliber machine gun.

After helping to move his captain, he manned the gun and shot at attacking Japanese planes until he ran out of ammunition.

Miller, one of the last men to abandon the sinking ship, helped pull injured sailors out of the harbor’s burning, oily water.

Miller was not only at war with the Japanese fleet; as a sailor he was fighting against Jim Crow Racism. His heroism went unnoticed for months.

But Lawrence Reddick, director of the Schromburg Center for Research in Black Culture in New York, suspected this was an intentional oversight.

He wrote to the Navy Department and asked if Miller’s name could be released so that it could be added to his center’s “honor roll of race relations.”

Initially, the Navy said there were too many Black messmen to identify, according to the center.

But Reddick and the network of Black newspapers, including the Norfolk Journal and Guide and the Pittsburgh Courier, pressured the Navy to fully identify him.

Members of the Black Press knew getting Miller proper recognition could undermine the stereotype that Black Americans weren’t any good in combat.

Before his death in 2003, former Courier reporter Frank Bolden said in an interview, “The publisher of the paper said, ‘Keep after it.’ We spent $7,000 working to find out…and made Dorie Miller a hero.”

On March 12, 1942, the acts of America’s first Black World War II hero, began circulating in the Black Press and in some white papers.

Thomas Bledsoe, now 42, the great-nephew of Doris Miller, first heard of his famous ancestor when he was six-years-old.

“My great-grandmother, Henrietta Miller, always talked about what he did, but never got the recognition he deserved,” said Bledsoe, who lives in Midlothian, Texas with his family. “She was disappointed he never got the credit for his contributions to civil rights and proving Black people could be more than a title of mess cook.”

Bledsoe is the Chief Human Resource Officer for My Health My Resources of Tarrant County which offers Behavioral Health, Disability, and Child and Family Services.

His eight and 21-year-old sons are well educated about their Great-Great Uncle, and in a few months, Bledsoe’s first grandson will be schooled when the time comes.

His Aunt, Vicky Gail Miller, a prolific writer, has written five books on the life and contributions of her Dorie Miller.

Actually, his original name was Doris. But when he enlisted in the Navy it changed to Dorie, Bledsoe said.

For the past several years Bledsoe has been assigned to the role of representing the family at the annual event in Waco, Texas commemorating his Great Uncle’s legacy. He delivers a speech before a wreath is laid near a statue bearing his image.

Two years ago on MLK Day when Bledsoe and other family members, were invited to a ceremony at Joint Base Pearl Harbor-Hickam Naval Base, the Navy announced that its next Ford-class aircraft carrier, CVN-81 would be named after Miller.

The name of a man whose heroism the military first fought to hide, will join presidents on this powerful warship.

Last August, Bledsoe, members of his family, and Naval officials participated in a ceremony where the first steel for the vessel was cut at Newport News Shipbuilding.

In 1973, the Navy commissioned the destroyer escort Miller, which was reclassified as a frigate two years later, according to The Navy Times. During the ship’s christening ceremony, the late Texas Rep. Barbara Jordan predicted that the “Dorie Millers of the future will be captains as well as cooks.”

Initially, Miller’s heroics earned him a letter of commendation only.

But stories by the Black press captured public attention. Pacific Fleet Commander Adm. Chester Nimitz upgraded Miller’s commendation to the Navy Cross. He was the first Black sailor to receive the third-highest honor for heroism.

His image was embossed on recruitment posters to inspire other Black men and women to serve in the military.

Even before Miller was awarded the Navy Cross, his story quickly affected reforms. The Navy opened up jobs such as gunner’s mate, radioman, and radar operator to Black sailors and eventually started commissioning Black officers.

But historians said it was out of necessity, due to the need for manpower, not to further civil rights for African Americans. Blacks fought fascists overseas and Jim Crow at home.

After the war, President Harry S. Truman’s executive order to desegregate the military in 1948 traced to Miller’s actions at Pearl Harbor.

Rep. Eddie Bernice Johnson, who represents Texas’ 30th Congressional District, said in a 2010 press release she had been working to honor Miller with the Medal of Honor since she first came to Congress in 1993. She is still working on it.

After Pearl Harbor, Miller went on serving his nation in World War II, and in 1943, he was one of 644 men who were killed when the USS Liscome Bay was torpedoed and sank in the Pacific. Miller’s body was never found. But his name and legacy live on postage stamps, schools, roads, and the Doris Miller Center in Newport News, Va., one of many.

Bledsoe said that one item on his “bucket list” is to visit as many sites and buildings bearing his Great-Uncle’s name as he can.

“Doris’ story is one about stepping into the moment and making a positive impact on the world, said Bledsoe.

“We all have our moments to create positive change and it’s about walking into that moment and doing what you are destined to do.”