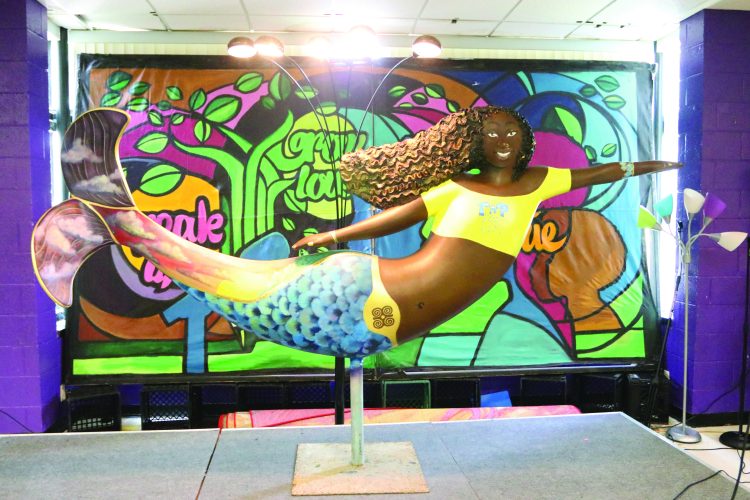 NORFOLK
Teens With a Purpose artists had the opportunity to design and paint a Norfolk landmark mermaid which was dedicated to them on Monday September 10 by the City of Norfolk. Vice Mayor Martin and City Councilwoman Adria McClellan were on hand to make the dedication official in recognition of the tireless work of generations of TWP youth who have contributed so much to life in Hampton Roads.
The completed mermaid was revealed during a ceremony and reception at the Vivian C. Mason Art & Technology Center for Teens, Norfolk’s only Teen Center and home for Teens With a Purpose since 2010. It will later be permanently installed on the corner of Church Street and East Olney Rd.
Al Roker, NBC Today Show Meteorologist, who is one of the founding and current members of the TWP Board of Directors, was scheduled to be present, but was unable to attend due to covering news about Hurricane Florence.
The Teens With a Purpose mermaid will stand facing Church Street where she will overlook TWP’s beloved community and the Safe Creative Community Space and garden that spans out over the adjacent 1⁄2 acre lot. TWP created this urban oasis to infuse the lives of St. Paul’s Quadrant residents with fresh produce, flower, art and lots of love.
The face of this teen mermaid was painted by TWP member Nanya Karum-El, now 20, who has been with Teens With a Purpose since he was 17.The body was painted by ChaVonne Whisonant.
TWP, under the leadership of Deidre Love, its founder, is planning its annual Fundraiser Gala, to take place, Thursday, November 1st, at the Chrysler Museum of Art.
For more information, go to WWW.TWP-THEMOVEMENT.ORG/2018TWPGALA.

Follow us
In this article:Mermaid, Norfolk, NPO, Teens with a Purpose, TWP