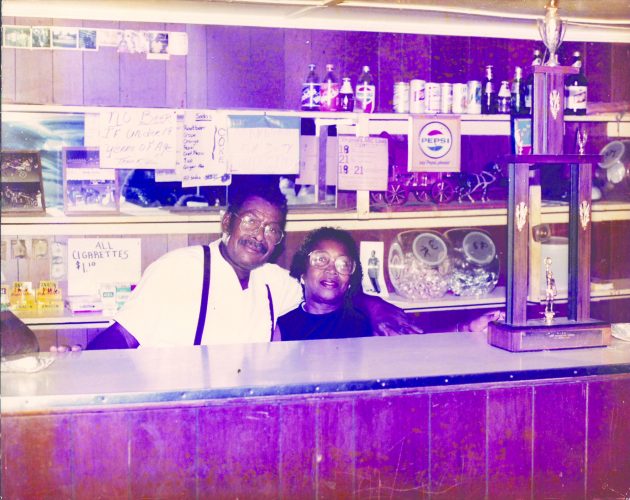 Fifty-one years ago, during the last stages of Jim Crow, one mile off Route 13 on the Eastern Shore, in Weirwood, Virginia, a bit of history and an example of Black self-empowerment and pride were built.
He is gone now, but it was the dream of Lloyd Henry Giddens, Sr., who worked in a factory and was a carpenter who wanted his own business.
He was unable to secure the $2000 from the bank to construct the initial building he wanted and it fell into disrepair. Later a new foundation was started with help from a friendly White man who gave him a large house. It was torn down, and being a skilled carpenter, he repurposed the wood to build the “Do Drop Inn.”
Giddens’ Do Drop Inn was more an invitation to a passerby who drove or worked along Bayford Street who may have noticed the written sign embossed on the white wood frame exterior.
It became the most significant business in the small mostly Black town. It was a restaurant where each day one could sit and eat soul food staples like fried chicken, potato salad, pig feet, and other southern delicacies.
Jane Cabarrus, Giddens’ daughter and the current owner of the site, says that it also was a safe haven for Black people who, at that time, were not welcome in White-owned establishments to eat and let their hair down.
To bring attention to this historic treasure, on Sept. 21 at noon on the local NPR outlet, WHRV FM 89.5, “Another View,” a special segment, “History Lesson: the Giddens’ Do Drop Inn” will be aired.
Barbara Hamm Lee will host the show live from the Barrier Island Center on the Eastern Shore.
According to Lisa Godley, the show’s Producer, the show will feature Jane Cabarrus, owner; Janice Langley, an event volunteer; Joan Wilson, whose dad owned “Edmonds Music” which provided the jukebox that still works today; and Peg Volk, a musician who has played at this historic hall.
“Another View” is WHRV’s weekly one-hour talk show highlighting issues related specifically to the African-American community. Once the doors of Eastern Shore’s oldest Black business was open seven days a week.Today, according to Cabarrus, instead of being opened daily, it opens open for special events and once a month as a food service outlet.
The old building owes its existence to its being used as a community center for social, political and civic gatherings and the community’s respect and love of its legacy.
Back in the day, it was the destination of Black people to socialize. Arthur “Big Boy” Crudup performed at the Do Drop Inn. He was a field hand and blues artist whose song, “That’s All Right Mama”, was later recorded by Elvis Presley, who was lauded as the King of Rock and Roll.
Billy Sturgis, who produced an album by Crudup’s three sons called “Franktown Blues” under his record label Warehouse Creek Records, said the album was born at the Do-Drop Inn.
“The Do-Drop Inn was the rehearsal hall,” said Sturgis. “The vibe of the place is just so fabulous. You walk through the doors and you just feel … something.”
Cabarrus said that her mother Annie M. “Granny”, once was known as the area’s best cook, created a steady stream of patrons from all walks of life to the site’s door.
Jane Cabarrus lives a short distance from the Do Drop Inn. She took over operations in 1988 when her father died. Her siblings sometimes worked several jobs just keep the place going.
“My father had a dream to own his own business,” she said. “My father had a sixth-grade education, but he was a skilled carpenter and had a head for business.”
She continued, “But he worked hard and made his dream a reality.”
While Big Boy Crudup and other rural stars are now gone and so is the patronage, there are still some remnants of yesteryear in existence.
According to Cabarrus “Jannie is still in the house. Jannie is the ancient jukebox and containers of penny candy.
Cabarrus says that today many young African-Americans, unlike her and her parents, 50 years ago, can now patronize any restaurant or bar of their choosing. They are unaware that the Do Drop was a symbol of Black Enterprise and a safe haven to socialize unmolested.
“I just hope that young people will not forget the historic importance of the Do Drop Inn,” said Cabarrus. “I hope that people do not forget their history because they will eventually will lose their heritage.”