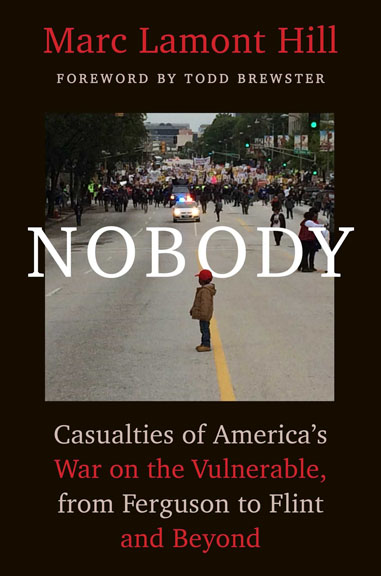 Charges dropped. You were surprised, but not surprised. Hopeful that it might be different, but only barely. You know that these days, the idea of justice can be a slippery issue that’s sometimes based on all the wrong things, and in the new book “Nobody” by Marc Lamont Hill, you’ll see how we’ve come to this.

On the afternoon of May 1, 2015, when Baltimore ’s chief prosecutor, Marilyn Mosby, said she was bringing charges “on six… police officers involved in the arrest and detention of Freddie Gray,” her pronouncement was met with “cheers.” Gray’s case then was the latest in a long line, nation-wide, but it wouldn’t be the last of its kind. Gray, says Hill, was Nobody.

“To be Nobody is to be vulnerable,” he says in his preface. It’s being “poor, black, Brown, immigrant, queer, or trans” and living in an atmosphere that’s “more rather than less unsafe.” Nobody is “considered disposable.” Take, for instance, Michael Brown. By all indications, Brown was a normal guy who acted spontaneously: he stole cigarillos from a c-store and shoved the shopkeeper, who called authorities and the rest is history. The way it happened, though, the dehumanization, and the aftermath of Brown’s “random encounter” with police will be talked about for generations, says Hill.

How did we get here? The answer is found in crowded, ill-maintained, depressing neighborhoods where schools are sub-par and few in charge care. It’s in the way the justice system operates for those who are too poor to hire a lawyer or afford their bail. Also to blame: so-called “quotas” within police departments, a lack of differentiation between serious infraction and minor annoyance, and the relative ease of targeting minorities in all of the above.

And yet, says Hill, we cannot “individualize this crisis.” We must fix housing, schools, the justice system, and the economy overall, in all corners of the country.
“We must reinvest in communities. We must imagine the world that is not yet.” You brace yourself, take a deep breath, unfold the newspaper at the corner and quickly peek at the headline to see if it’s about yet another shooting of a young person. So begins your day. Shoulda read “Nobody” first.

Before you do, though, let’s get the elephant out of the room: author Marc Lamont Hill isn’t anti-cop in this book. Instead, I saw a thoughtful, balanced, thought-provoking look at how today’s authorities, police departments, and government entities have evolved to be what they are, and how that can be turned around. In his examination of the past, in fact, Hill paints real solutions to the problems that put vulnerable citizens in harm’s way. I also saw that those solutions don’t lie one-hundred-percent with those in Blue. This is not an easy book to read; it’s not fun, either, and it demands that you think about what’s said. Still, if you only read one book with the intention of making change, then this is what you want. Start “Nobody” today, and there’ll be no dropping this one.