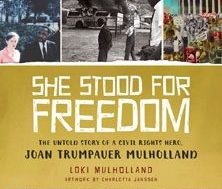 Your parents always taught you to stand up for yourself. Form your own opinions, they say, and don’t follow the crowd. If so-and-so wanted to jump off a cliff, be brave enough to not go, too. Speak up when something’s not right, and hold your head high. Stand up for yourself and, in the new book “She Stood for Freedom” by Loki Mulholland, stand up for others, too.
Growing up in Virginia in the 1940s and ‘50s, Joan Trumpauer knew about segregation. It was the law in most parts of the South, but Trumpauer’s parents were split on the issue: her father was a Northerner who believed in equality for all, while her mother was a Southerner who demanded racial separation.

When she was still a girl, Trumpauer learned who was right: on a dare, she went to a neighborhood that her mother had forbidden her to visit. There, she saw a tumbledown school for Black children, and it shocked her. Treating people differently wasn’t fair! She became determined to do something about it when she grew up. After graduating from high school, Trumpauer went to college, where she was invited to join a demonstration. That was something new for her, but she sensed that it would anger her parents. Still, how could she not go?

In 1960, Trumpauer formally joined the Civil Rights Movement, to stand with others in equality. She participated in sit-ins, where people literally sat at lunch counters until the stores closed or the police came. She picketed a segregated Maryland amusement park that summer, and helped her Black friends gain admittance. People warned her family that she was making trouble, but Trumpauer didn’t care.

When she had a chance to be one of the Freedom Riders, she seized it. It was dangerous, and it eventually landed Trumpauer in prison, but that didn’t stop her. Even as an adult with children of her own, Joan Trumpauer Mulholland continued with her efforts for equality. Today, she continues to remind people that you don’t have to change the whole world. You just have to change your corner of it.

Remember how it felt to think that your one small voice wasn’t going to make a dent in anything important? Yep, and “She Stood for Freedom” proves otherwise. Starting when his subject was roughly the same age as his intended readers, author Loki Mulholland tells the little-known story of his mother, Joan, and the unsung work she did for Civil Rights. I found that to be the most interesting aspect of this book – that one woman did so much for the Movement, but her name is rarely mentioned in any history books. To read this book, in fact, is like focusing on one spot of a painting – or, more aptly, to look at one square of artist Charlotta Janssen’s illustrations here. There is a version of this book out there for preschoolers, so be careful which one you choose. This version of “She Stood for Freedom” is meant for 8-to-12-year-olds and it can stand alone.