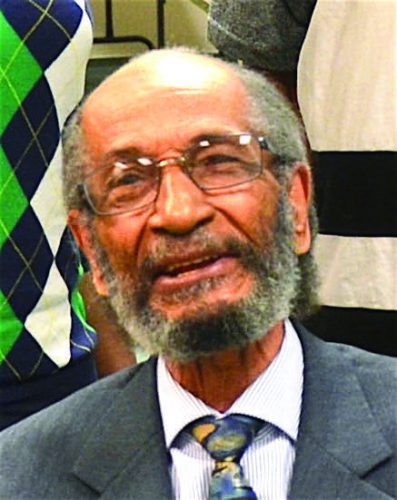 Norfolk’s downtown has evolved into a vibrant business and residential center for new and old residents of the area.

Various pieces of puzzle contribute to it as venues for arts and entertainment: the Chrysler Museum of Art; the SCOPE arena; and the Norfolk Arts District, anchored by the new Copeland Theater.

Then there’s the Harrison Opera House; Roper Center; NORVA Theater; the Attucks and Wells Theaters (home of the Virginia State Company); and Chrysler Hall, where theater shows and concerts are staged.

A missing piece of this puzzle is an amateur or professional African American theater group and a building it can call home.

The closest one to this area, The Heritage Ensemble Theatre Company, is in Richmond.

The last one to function in Norfolk, was the Player’s Guild, now dormant except for its name and recollections of fans.

On June 16, Leslie Rainey is laying plans to raise anew, the curtain of Black theater tradition in Norfolk.

He and others are working on building support and the infrastructure for the Church Street Community Theater Ensemble (CSCTE).

CSCTE’s debut production will be June 2 with Lonne Elder III’s “Ceremonies in Dark Old Men,” at the Murray Center with shows at 2:30 and 7:30 p.m.

Rainey said he and his troupe hope to perform at least three or more plays during the course of year.

Rainey will direct this play which features five principal characters: long time Tidewater Thespian and scribe, Terrance Afer-Anderson, who will play Russell B. Parker, the main role; Williams Jenkins will be Anthony Britt; Alton Thompson will play Theopolis Parker; Jasmine Hopkins has landed the role of Adele Eloise Parker; and Jeff Phillips will be Blue Haven.

The play centers around Russell Parker, a widower who runs a barbershop that has no customers. He lives above it with his daughter and sons. Parker is not an ambitious man, but he is amiable and honest, at least, until he is talked into going into business with the scheming Theopolis.

In the early seventies, he successfully auditioned for Sir Laurence Olivier at the Old Vic Theatre in London, England and performed in the Old Vic’s production of the “BACCHAE” by Euripides.

Rainey also performed at the Traverse Theater in Edinburg, Scotland. This was followed by back to back performances at the Lyric Theatre in Belfast, Northern Ireland, where he performed in William Shakespeare’s “Merchant of Venice,” and, Dale Wasserman’s “Man of La Mancha.”

One of his most noted performances locally, which he also directed was Alfred Uhry‘s “Driving Miss Daisy,” with Miss Marty Terry in the role of Daisy Wertham. It was at the now defunct, Lake Wright Dinner theater, in 1997.

Rainey says his love for theater is genetic, as his father was a member of the Norfolk’s premier ‘former’ African-American theatre company, The Players Guild.

In a GUIDE Archive story dated January 20, 1940, the group was performing a rendition of a movie hit, at the time, “The Shining Hour” at the Booker T. Washington High School Theater.

Many of its shows were directed by Albert Dinkins, who was one of the founders of the community theater group. He worked with the troupe until his death in the late 1980s.

Powered by local amateur talent, according the GUIDE archives, the Players Guild had various homes, including Booker T, the Smith Street Community Center and Brown Hall at NSU.

“They were all over the place including the Booker T. Theater (now the Attucks) and other places where they could afford,” Rainey said. “It was the premier Black theater troupe in the area. I want to revive that tradition,” Rainey says. “With the exception of NSU, African Americans have no control over any stage where the region’s abundant Black theatrical talent is able to ply its acting and technical skills.”

Eventually Rainey and others who support his effort, hope the fledgling Church Street Community Theater Ensemble, will provide that outlet, as a viable self-sustaining non-profit organization.

At one point in the early 1980s, before its redevelopment, Rainey said he ran a storefront theater in the 700 block of Church Street which he called the New Attucks Theater.

Rainey hoped, after the Historic Attucks Theater, built in the early 1900s was restored, his troupe would be housed there.

He sought funding from the Virginia Arts Commission, but the agency said that despite his group’s “good works,” it did not have enough community support.

Rainey said he questioned that assessment and is working to make sure it does not happen again.

The Attucks was eventually reincarnated and is now owned and operated by the City of Norfolk which provides programming through the SevenVenues Arts programs.

Rainey said history and location in the city’s urban core, would make the Attucks a natural home for the Church Street Community Theater Ensemble.

In 2004, Rainey was the director of the NuSenSations Theater group which was once housed in the Vivian C. Carter Mason Arts and Tech Center on Church Street.

Rainey said he wants to network with arts, civic and social actions organizations serving the residents in Huntersville, Barberton, Lindenwood, Barraud Park, Calvert Square, Tidewater Gardens and Young Terrace public housing communities, to build a base of support and talent housed at the Attucks.

He said once the CSCTE completes the run of “Ceremonies in Dark Old Men,” he will organize a series of theater workshops to educate adults and youth who live in the Church Street corridor and other parts of Norfolk and the region.

“The goal is to establish a viable community theatre company very much involved in the community,” said Rainey. “It is going to take the involvement of our community leaders. They must recognize a community theatre isn’t only about satisfying one’s aspiration of getting to Hollywood and Broadway.”

“First, it’s like a chain reaction. When people work together in a situation like theatre, you give people the tools … to solve their own problems. Also theatre can develop cohesion, communicate perceptions … and knowledge. “

Recently he said he approached the city, Virginia Arts Festival and Norfolk Arts Commission, with the idea of the Church Street Community Theater Ensemble, being the permanent performance group at the Attucks.

While they “expressed interest,” said Rainey, according to the Norfolk Arts Commission, it would cost an astronomical sum for administrative and technical support fees to get started with their initial performance of “Ceremonies of Dark Old Men.”

Rainey said he was told that if CSCTE’s first show was a success the company’s next outing would not require such high fees.

“We weren’t looking for a freebie,” Rainey said. “However, he did think there would be some support in the form of a financial break. After all, everything that enters the Attucks is pretty much sold out. And we have a top notch cast of players.”