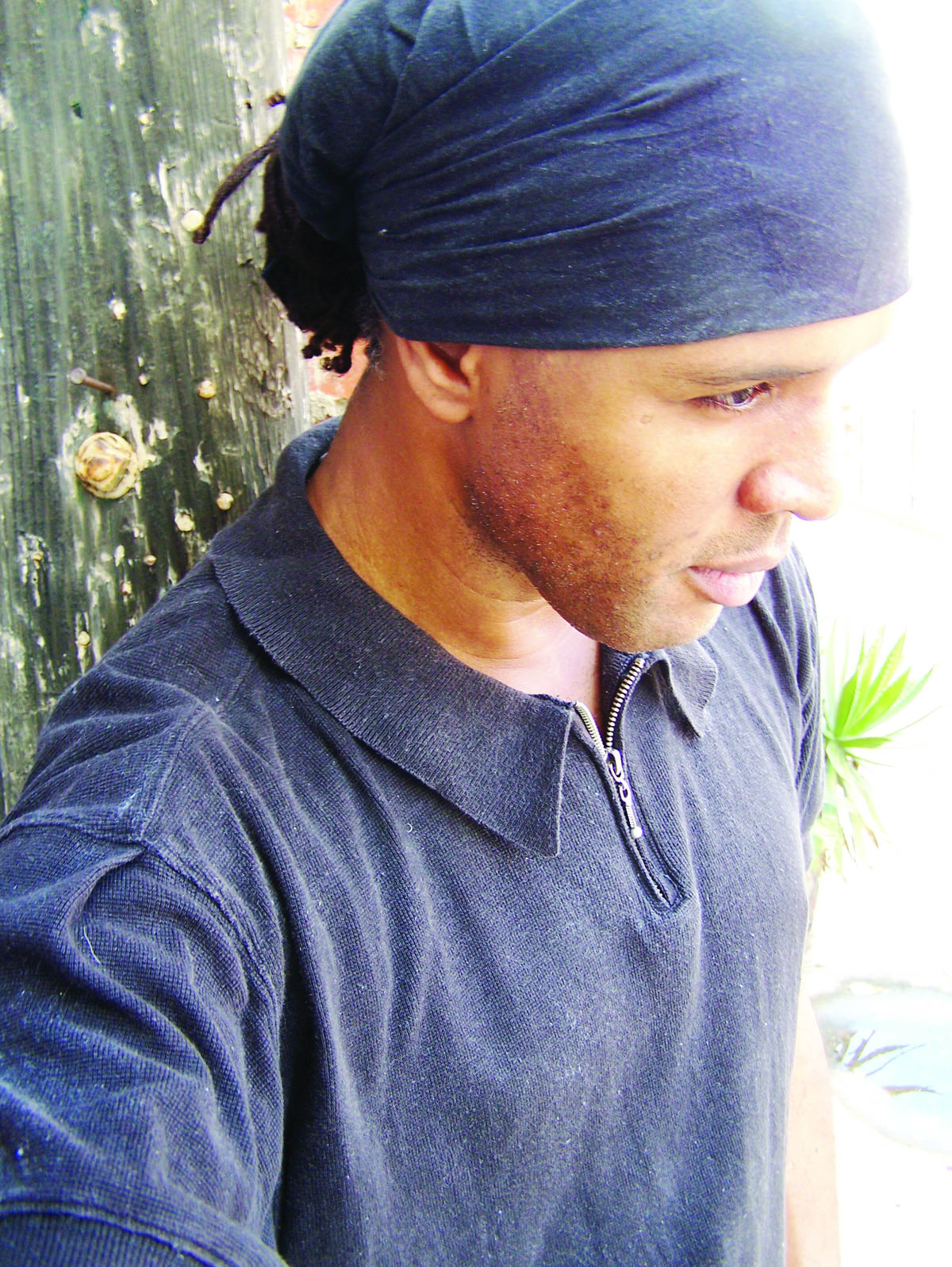 Imagine being raised on a farm and finding an exquisite connection between nature and music. That’s what it was like for engaging folk guitarist-vocalist Lawrence Lambert. You wouldn’t expect to find a towering, brawny African-American male to be romanced by the distinctive tenor of folk music, but from the first chords he plays on his acoustic guitar, the first utterances of his melodic voice, you know that he is something quite special indeed.

“I think being raised on a farm has given me a very stripped-down approach to music,” Lambert said. “I am also a big nature lover and avid gardener. This farmers’ son is most happy when I have some dirt under my nails. I know most might not like that image, but I like taking a seed and turning it into a plant. I also like taking words and turning them into a song.”

Lambert was born in Norfolk, but was raised on a farm in Pungo. They had chickens, geese, pigs, sheep, cows, and even a horse for a spell. They also farmed an expansive field and planted some of Pungo’s first strawberry fields, “long before the Strawberry festival,” he noted.

In such a pastoral, rural setting, the music of nature was richly amplified by the rich melodies nurtured in his home. Lambert recalled that for he and his twin brother Clarence, as well as another set of twins, “Music, including piano lessons, was always a big part of my family life. At one point, we were all members of the school band. I was also in the school’s chorus.”

Perhaps Lambert’s biggest familial influence on his music was his Aunt Daisy, a very active and prolific pianist/organist in the Hampton Roads church community. “As a child, I often marveled at how gifted she was. I also remember how important it was for her to pass on her musical legacy to someone in the family. I guess I’m that person.”

But why the folk genre? “Folk music,” Lambert said, “is the essence of all music. It tells a story. Folk songs, historically, spoke against war, racism and other social injustices. In folk music, the verse is critically important. I have always been moved,” he added, “by how great lyrics can help people connect to an emotion. That is the job of an artist, to help people connect emotionally.”

Yet, he laments that, “In much of music today, the traditional verse is missing. It is all about the chorus and some new slang term, which they repeat, over and over again. But when you think of Nina Simone’s song ‘Feeling Good,’ you understand the power of music, the poetry, how it can lift you up. Her work was transcendent.”

In addition to Simone and his Aunt Daisy, another singular creative influence in Lambert’s life was Dr. Ysaye Barnwell, formerly of the popular, all female, gospel and blues acapella group Sweet Honey in the Rock. “She travels around the country, and the world,” he said, “doing this magical thing called ‘community sing.’ By the end of her concerts, the audience is a part of the show, singing songs like ‘We Shall Overcome.’ It’s a testament to the truth that your voice can change the world; but the secret is your voice can change the world, when we sing together.

“I’d like to let people know,” Lambert continued, “that life is not always about things. That real life happens in those moments that we share with people. It is about helping people and trying to make a difference on this planet. I wrote a song called ‘It’s Beautiful,’ about what can happen when people decide to ride out the storm. Our time on this planet is finite.”

“I want people to feel renewed and blessed, when they listen to my music,” Lambert said, “like you feel when you walk out of your church, brand new and ready to spread the message. If you ever attend one of my shows, you know that I will have you singing.”

Lambert has played in such legendary venues as the Chicago House of Blues and The Bitter End, in Greenwich Village, New York, as well as numerous theaters across the country, including the Sandler Center, Virginia Beach. They have all left him with distinct, very positive impressions, but his experience at the Chicago House of Blues was particularly memorable. “When you look around and see all the amazing people who have stepped on that stage, you can’t help but be humbled.”

In reflection, he pondered, “How did this farmer’s son get to step on that stage? “It took a lot of love, support and encouragement. Thanks Mom!” His mom, the greatest influence in his life, at one time had dreams of being a famous opera singer. “I was blessed to have the most amazing mother in the world. She exudes love from every pore of her body. When she is near, I know she is blowing me kisses and holding my heart. She is my most wonderful, loving angel!”

Lambert himself dreams of making an appearance on the popular television program “Austin City Limits,” with his band Little Doors, featuring Larry Berwald on lead guitar and Dave Hufstedler on bass. “We play American Standards,” he said, “as well as my own songs in a variety of venues in Hampton Roads.” On “Valentine’s Day,” the group is doing a special show at Big Pink in the Phoebus district, Hampton.

Lawrence Lambert is a towering, charismatic teddy bear, an endearing soul who offers a special invitation to a large portion of the African-American market yet exposed to the potent social fervor of folk music. He provides a bit of a nostalgic nods to the great Richie Havens. If you’d like to know more, search for little Doors on YouTube. You can also find his CDs at www.lawrencelambert.com.