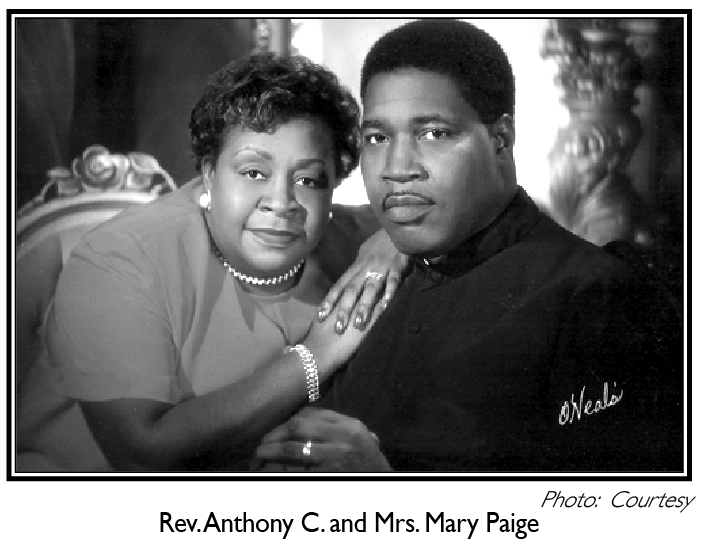 Today Rev. Anthony C. Paige and his wife, Mary, are in their 43rd year of marriage which has produced two children and nine grandchildren.

Recently Rev. Paige, the Senior Pastor at First Baptist Church, Lambert’s Point in Norfolk, took time to tell a brief story on how the various branches of his collective family tree are watered by the Great Migration of Blacks during the depths of the Great Depression and onward.

Both are products of Stillman College, an HBCU, where they met before moving to Norfolk, marrying, and starting their family.

The desires to find a way out of the Jim Crow South by the couple’s respective families are good examples of what many other African-American clans experienced during the Great Migration of Black people from the South to northern and westward states between 1916-1970.

“At that time, Blacks could not get work in the coal mines in West Virginia because the white Polish workers dominated those jobs,” said Paige. “But the Polish workers went on strike in the early 1940s. Blacks heard of the openings, and migrated from southern states to replace them in the mines. Migrations was about economics to my family … that meant finding work to feed and put a roof over their head.”

His mother, Catherine Morrison, was born in Georgia. Her oldest sister, Kathleen, moved to Columbus, Ohio in the 30s, he said, to become a live-in maid with a white family in that city

“She was hired to work in the home of a wealthy white family,” said Paige. “Once Kathleen was settled in her job and had a roof over her head, she then sent back for her other siblings, her parents and they all lived under her roof. Her sister, Christine, was hired by a white family as a live-in maid, too.

Paige said his father’s mother died of tuberculosis while in West Virginia. Eventually, Paige’s grandfather and his offspring heard of job opportunities in the steel mills in Columbus, Ohio, and they moved further northward.

There a 15-year-old Joshua Paige, Jr., in the early 1940s, met Catherine Morrison, resulting in the birth of Anthony Paige out of wedlock.

On the other side of the family ledger, Paige said his wife’s story of migration northward was just as intriguing.

Two older sisters of his wife, Sadie and Lela, moved from Georgia to Chicago and New York.

They then paid for their other sibling to follow them northward.

Their parents did not move, preferring to remain in Georgia and work their farmland owned by the heirs today.

Paige said his mother remained in Columbus. But his

father enlisted into the U.S. Army.

Young Anthony Paige was sent back to Greensboro, Alabama where he and his two younger siblings were raised by his grandfather’s mother.

“When not attending college, during the summers I was in New York with my Uncle Willie Lee working at a service station he managed or in Cincinnati, Ohio, with Uncle Stonewall and his wife, Hattie,” recalled Paige, who was majoring psychology and sociology. “My father escaped Jim Crow by enlisting in the Army, his brothers went up north.”

He said after tours of duty in Vietnam and then in Panama, where his father married Clara, a native Panamian, Joshua Paige, Jr., moved to Norfolk with his bride.

Rev. Paige said in 1976, the year he and Mary married, was when he finally “caught up with my father.”

The couple stayed with his father until they could provide a roof of their own and launch their family.

Before she moved to Virginia, Mary Brown Paige landed her first job with the federal government at the Redstone Arsenal in Huntsville, Alabama, when Uncle Sam began hiring Blacks at respected level in professional positions.

Once moving to Tidewater, she had a job in Newport News as a contract manager at Fort Eustis, where she retired in 2011.

He then attended the Samuel Dewitt Proctor School of Theology at Virginia Union in Richmond, before he was hired as the Senior Pastor of First Baptist Church in West Point, Virginia in 1981.

By then, his father, Navy Master Chief Joshua Paige, Jr., had settled in Norfolk and become a business owner. He opened Paige II, a night club at 35th and Colley Ave. in Park Place.

When his wife Clara Watley fell ill after suffering an aneurism, he sold the business and devoted his time to caring for her. He also became a respected civic leader in the city and eventually become a member of the NRHA Board of Directors, which he chaired at one point.

His wife, Clara, was once Executive Director of Head Start for the social action agency, STOP, Inc., and then was a Professor of Education at NSU.

“The Great Migration for my family and others was an economic and social paradox,” said Rev. Anthony C. Paige. “There was the idea that if you migrated north, you could get on your feet, rather than staying down south and having your feet cut off. Black folk found better jobs up north, but they left hell and found in some places a mix of prosperity and hell.”