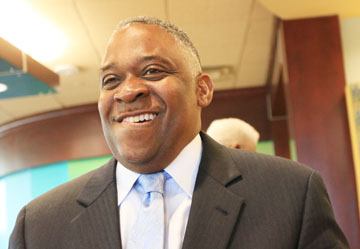 Norfolk School Board Chairman Rodney Jordan says a new report on the adverse effects of reduced state funding for schools is must reading for anyone interested in public education.

Norfolk Public Schools is among six Virginia school divisions analyzed in a report on the adverse effects of reduced state funding for schools.

The report concluded that the ability of the six divisions has been significantly impacted due to reduced state funding since the recession.

The Commonwealth Institute for Fiscal Analysis, an economic and policy research organization, in its report said Norfolk Public Schools and other divisions had to eliminate teachers and instructional specialists. This action has placed increasing responsibilities on teachers, reduced critical support positions such as school counselors, not kept pace with the changing language needs of students, eliminated student clubs and shortened after school programs, and allowed facilities to deteriorate and fall into disrepair.

The funding reductions, according the report, has weakened the ability of school divisions to provide day-to-day operations and forced schools to cut back on critical education positions and programs.

The divisions have been forced to make these decisions in order to balance their budget as the state reduced financial support.

Chairman Jordan said, ”This brief by The Commonwealth Institute is must reading for elected officials, policy makers, parents, and business leaders. Investing in our public schools and students matters if we want high paying jobs, growing regions, and a strong Commonwealth with a vibrant economy.”

“These experiences from instructors around the state show that years of the state cutting corners to balance the budget has finally caught up with teachers and schools trying to do more with less,” says Chris Duncombe, a policy analyst with the Institute and co-author of the study. “This is not a recipe for success.

In Norfolk, state support has fallen 15.3 percent per student since 2009 in real dollars. Today, the division has 306 fewer teachers than it did in 2009.

Overall, Norfolk has over 500 fewer staff in its schools than in 2009.

Meanwhile, the number of English learners has more than doubled, increasing by 669 students since 2009.

The report endorses proposals from Virginia’s Board of Education that would undo some of the harmful cuts made during the recession and ensure Virginia schools have adequate staffing for critical positions such as principals, assistant principals, school counselors, nurses, social workers, psychologists, and other support staff.

In the report, an administrator in Norfolk expressed concern about the general cleanliness and upkeep of school buildings, “You want the kids to go into a nice, clean environment. It’s hard to do that when you don’t have enough staff to … just literally clean … and do those things that keep the building up.” He said that custodial staff are forced to “hit the high spots” rather than doing a thorough cleaning of the facilities. Lack of upkeep has led to infestations of insects and rodents in some of the schools, including a problem with cockroaches in one of the cafeterias.

According to the report, mold is of such concern in Norfolk’s Historically Black Booker T. Washington High School, “That teachers are now writing to [the Occupational Safety and Health Administration] … That is how bad the mold is in that building,” explained one Norfolk administrator.