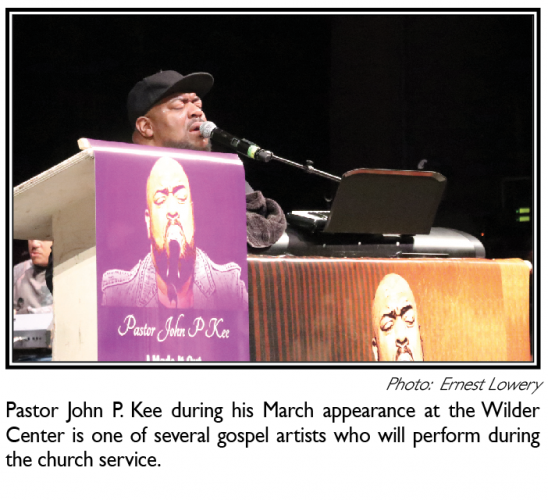 Now something IS in the water.

What’s been described as Pharell Williams’ “cultural experience” has sealed the Something In The Water Festival world soiree April 26 through April 28 with one of the most stellar Gospel music lineups to hit Coastal Virginia much less its shores. The festival’s Sunday Pop Up Church Service is scheduled to feature Kirk Franklin, John P. Kee, Mary-Mary, Tye Tribett, Israel Houghton and Warryn Campbell.

Services start at noon on Sunday, April 28th, and if you listen to any of the aforementioned performers, that’s church! Everyone’s invited who had faith in the City of Virginia Beach and the Williams’ efforts to have something progressive for everyone on the shores of the Atlantic Ocean.

If all goes as planned, and there has been every indication that it will, the economic impact of hosting such a regional event will be palpable.

As Williams has proclaimed, it’s “Something In The Water.”

According to the Something In The Water press, Sunday’s inclusive celebration is a free event for the community created to “unite and uplift, offer hope, victory, fun and faith.” The revival-style experience will include gospel choirs, dance ministry, sharing the gospel and prayer offerings. That particular stage will be at Ocean Avenue and 20th Street in Virginia Beach. At press time 25 area churches and ministries had been asked to participate along with local and national worship leaders sharing the experience.

Something In The Water is a world-class event that will not only showcase a top lineup of music performers, the film “The Burial of Kojo” – acquired by Ava DuVernay’s ARRAY company – will be screened, followed by a discussion. The film first premiered on Netflix March 31.

Something in the Water’s pop-up church service includes appearances by wellness expert Deepak Chopra and Geoffrey Canada, the president of the Harlem Children’s Zone whose work has transformed the lives of thousands of inner-city youth.

With a businessman and entrepreneur’s forward thinking vision, Williams’ event, for all intents and purposes, is part of a bigger vision that he has for the region that has meant so much to him and many of the performers. It is a dress rehearsal of sorts for his Atlantic Park development in the location of the monolithic Dome in Virginia Beach. Virginia Beach Mayor Bobby Dyer commented in his State of the City address that in its first year alone the Atlantic Park project could possibly generate “eight million dollars” in tax revenue.

Something In The Water will show the potential of the Atlantic Park project. Williams’ list of performers at the sold out events include Portsmouth native Missy Elliott, Timbaland, Usher, Chris Brown, Missy Elliot, N.E.R.D., Janelle Monae, Diplo, the Dave Mathews Band. Others scheduled to perform are Snoop Dog, Anderson Paak, Kaytranada, Ferg, Jhene Aiko, Rosalia, Leikeli47, Maggie Rogers, Mac DeMarco, Masego, Virgil Abloh and John-Robert. Fam-Lay will be joining Skateboard P’s ensemble of friends accompanying him on stage. More star power is added with Diddy, Kap G, Charlie Wilson, and Amber Mark, who will each have their own sets during the festival. They join an already-stacked lineup of performers that includes appearances from Migos, J Balvin, SZA, Lil Uzi Vert and Diplo.