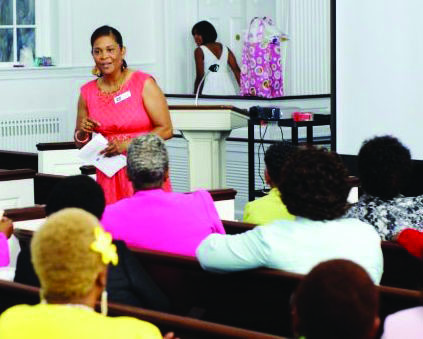 She tries to be-all-things-to-all-people. And soon the superwoman mindset can trigger binge eating, depression, obesity, or increased alcohol-nicotine-and drug usage. Worse, it can exacerbate diabetes, heart disease, hypertension and other illnesses that disproportionately strike SBW. This means like an aspirin contains a chemical structure that can trigger nausea, an upset stomach or skin irritation; or the drug Warfarin may prevent blood clots but cause serious internal bleeding; the Strong Black Woman looks beautiful on the outside because she holds families and communities together. But an increasing number of reports show that the SBW mindset can also trigger stress, distress, depression and anxiety; because the SBW is a type of coping pattern that dates back to slavery.

The solution is simple. Look for an array of new responses, like Fredda Bryan did after she was diagnosed with stage 4 breast cancer about 14 years ago. Rather than retreating behind the SBW mindset which is more of a mask, Bryan said she chose not to mask her real feelings and needs. “A chronic illness on any level is humbling,” said Bryan who was a Navy air traffic controller in 2002, the year she was diagnosed with cancer at age 36. “In the Navy I was a hard rigid person. I was expected to be an expert in my field.”

“Now, I cry twice a week,” Bryan said laughing softly, during a recent phone interview. “I am the worshipper who sits on the front pew in church and cries on Sunday.” “I had to learn to let others help me,” said Bryan, who is now a spokesperson and an associate director and community health adviser for the American Cancer Society. “An older woman told me there’s nothing we can do science-wise but we can show you that we love you.”

“She said, ‘Allow us to love you and to help take care of you at this time – let us take you to the doctor,’“ Bryan said. “I know I can drive myself to the doctor, but I allow my village to help me. I believe when we become a village we begin to heal.” “I think as Strong Black Women our best support system is other women,” Bryan said. “All of us have had a lot of challenges mentally, physically and psychologically. So what I’m saying is, ‘If you’re not good, I’m not good.’ It is hard for a strong personality to stop and say, ‘I need help.’ We are trying to multi task so much that we view putting our own self first – as selfish.”

But, why is self- care an alien, unfamiliar coping strategy to many SBW? Why is limiting yourself to a narrow range of responses acceptable to many SBW? Why are healthy affirming coping strategies like relying on others, weeping in public, and caring for your own self considered signs of weakness? Some of the answers surface in a 2013 dissertation titled The Strong Black Woman, Depression, and Emotional Eating. The author, Dr. Michelle Renee Offutt said, “The cultural persona of the Strong Black Women is an ideology that promotes unflagging toughness and denial of self-need.” “In this instance, strong refers to a common emotional trait that is generally prized,” Offutt wrote. “Strong Black Women are not born into strength, but are socialized into a specialized sisterhood, beginning early in their childhood.”

“The typical coping patterns associated with a superwoman image are avoidant in nature, taking the emphasis off self and placing it on others,” Offutt noted. “Distraction, generalized anger, and denial are avoidant coping strategies that been linked to poor blood pressure regulation and to poor glycemic control.” It sounds like a vicious circle because, well, it is. This means to achieve perfection, the SBW walks on a treadmill juggling everybody’s need and expectations; but not her own. Soon juggling triggers stress. Worse, the juggler on the treadmill is limited to only a small number of repetitive responses.

Dr. Althia Ali said she is not sure when she stopped juggling everybody else’s expectations. “A great deal of my growth away from the notion of a SBW has been that I let go of the quest for perfection and the feeling that I had to be perfect in every way,” said Ali who has held several administrative posts including the presidency at Bennett College. “It’s unattainable and doesn’t exist in the world – nothing and no one can be considered perfect,” she said. “So I let that pursuit go in favor of the quest for excellence.”

“By focusing on excellence, I challenged myself to give the best that I could give,” said Ali, who has also served as vice president for academic affairs at United States International University in San Diego and assistant vice president for academic affairs at Mankato State University in Minnesota. She has also been a principal at several elementary schools. “This whole thing about perfection is that we are conditioned/socialized to strive to have perfect lives: the perfect family, education, career, spouse, kids, life style, and on and on,” Ali said. “It’s exhausting to stay in constant pursuit of something that is not only unattainable but also when many of the things are beyond our control because of so many external variables.”

“Still, too many women buy into the pursuit of perfection to the point that they torment themselves and, in turn, others when they have families that disintegrate … careers that are less than stellar (though they pay the bills), spouses that cheat, or kids that are average and may not have super powers.” “No wonder SBW self-medicate with their soother of choice (food/drugs/sex/recreational shopping – you name it) and spiral downward,” Ali said. “They’re exhausted and (frustrated). We could call it disillusionment, I suppose.” To learn more about the SBW, four Norfolk State University psychology professors began compiling data several years ago. Surprisingly, denial was one of the first obstacles that the researchers encountered. Since denial is defined as a defense mechanism that is used to reduce fear or anxiety, denial is another limited response. “It does not work long term,” Dr. Carl Alasko wrote in an article titled, How Does Denial Actually Work? It was published in Psychology Today on April 23, 2012. “Reality always wins,” Alasko said. “And when it does, the next step in the process is blame, which shifts responsibility onto someone or something.”

The point is denial was one of the first responses that one of the Norfolk State researchers encountered while gathering data on the SBW. Dr. Karen Holmes said she was conducting research several years ago on about 50 middle aged African American professional women. “I asked these women if they considered themselves to be Strong Black Women,” said Holmes who heads Norfolk State University’s Master of Arts Criminal Justice Program in Virginia Beach. “Roughly about 98 percent said yes.”

But as Holmes probed, questioning blood pressure, stress, and overall health levels, she found that there was a connection between those who performed poorly on tests that measured psychological and physical well-being, and those who said they had high blood pressure and high levels of stress. “I went a step further and asked a woman if she would describe herself as a SBW,” Holmes said. “She made it clear she was. In fact, she became defensive – almost at the level of anger.”

“I contribute that to how African-Americans have not always been perceived positively by the wider culture,” Holmes said. “On the surface, the SBW is positive on the surface. But it also involves taking care of others before you take care of yourself.” “And that gets to be a burden spiritually and physically. So it’s hard for some women to reconcile the contradiction that on the one hand being strong, independent and resilient also comes with some of the negative aspects of this overwhelming strength narrative.” “For many in the community the SBW is the one who takes care of everyone,” Holmes said. “If you are that one in your family, then how do you say I am struggling? I can’t do it.” Dr. Ernestine A.W. Duncan, who chairs the Department of Psychology at Norfolk State said, “It’s not so much that I think that self-care is alien but rather it is a bad word. People equate self-care with being selfish.” “Our self-esteem and self-concept are tied to how many balls we keep juggling in the air,” Duncan said, offering three tips that will improve self-care. “As a trained clinical psychologist, I advise people to shift gears,” Duncan said. “That means you move from sacrificing to a fault to self-care. Learn to prioritize and say no. There are some things that we just really just can’t afford to do.”

“Maybe we can’t go to the meeting,” Duncan continued. “Perhaps, your child has a game and you have a meeting. Maybe you can’t go to the one you think is less important. The second tip is to learn how to manage stress. Our response is almost always a choice.” “Third, adopt healthy eating, exercise and sleeping habits,” Duncan said. “I say adopt because we all know the right thing to do; but we don’t always do it.”