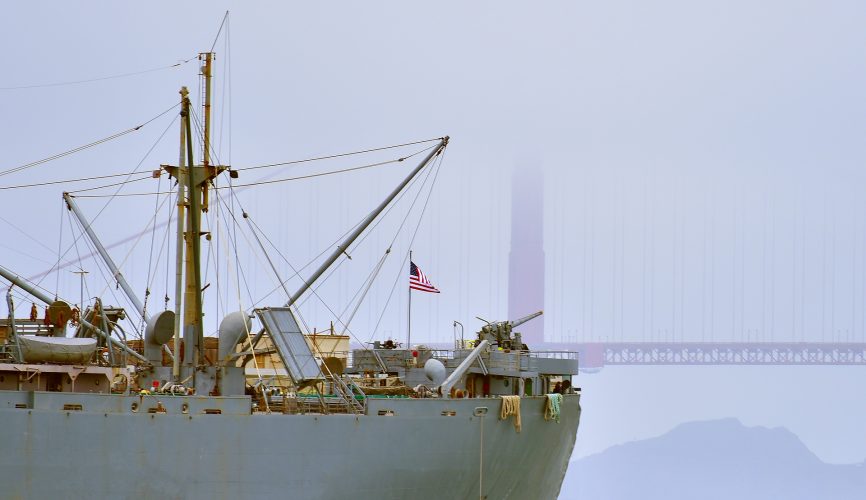 To Brinkley, now retired and living in Hampton Roads, joining the Navy in the early 1970s was one of the best decisions he ever made. “Growing up in Norfolk, I was always fascinated with ships and even toured a ship. I was in the ROTC in high school. I went to the Naval Academy in 1973. When I got to the academy I focused on surface warfare because that was the closest field that led to pure leadership.”

After he graduated, his job was simple and yet complex. “My job was to motivate other young men and women to do their jobs so that we could succeed and complete the mission. On each ship, you assume a position of higher responsibility. Each job hones skills you learned in previous jobs. I thoroughly enjoyed it. I was blessed. I had good crews and nothing bad happened while I was there.”

He retired after 28 years of service. His final rank was captain. He served as a surface warfare officer. This means he drove various ships in the Navy.

Brinkley cannot zero in on a single life-changing memory in the Navy because he had, well, many including the time he sat in his room at the Naval Academy, shining his shoes, and sweating while preparing for inspection. “It was 90 degrees outside,” he recalled. “I sat there sweating and remembering some advice my grandfather gave me.”

Brinkley laughed and said, “The only advice he ever gave me was don’t join the Navy. That didn’t pop into my head until that day. Inspections were held every day for a plebe. All you could say in response to any question was, ‘Yes, sir.’ ‘No sir.’ ‘Aye, Aye, sir.’ ‘I’ll find out sir.’ No excuse sir.’”

His grandfather served in the U.S. Navy as a steward’s mate during World War I. ”He had to shovel coal into the boilers,” Brinkley explained.

Perhaps it is important to point out that Brinkley enrolled in the U.S. Navy about 25 years after President Harry S. Truman signed the 1948 Executive Order that desegregated the military. While you don’t have to scroll too long online to find soldiers describing many racial discrimination incidents that came on the heels of Truman’s landmark order, Brinkley said the Navy still had some challenges when he joined.

“Of all of the branches of service, the Navy was the most regressive in term of integrating Blacks into the regular service,” Brinkley said. “When I got to my first ship, I was the only Black officer assigned. What was stressful for me was that my department head was born in West Virginia and went to school in South Carolina.”

Brinkley continued, “My commanding officer was from Mississippi. And I think they had decided I should not be an officer in the Navy. So I learned that to be successful one had to be twice as good as his white counterparts. At the end of my tour I was ranked as the No. 1 lieutenant junior grade.”

His first tour was in Norfolk. It lasted three years. “It took a lot of hard work and effort to succeed,” he said. “Every place I went, I met somebody who decided I shouldn’t be there. I had to dig deep and overcome the additional pressures they were putting on me. I had to dig deep to overcome, and to change their mindsets. I think it was when I got to command a ship (USS Gunston Hall in Norfolk in 1998 at about age 40) that I felt I was seasoned enough to proceed from that point.”

He added, “That was the best job that anyone could have. It was scary from the standpoint that I was in control of the ship. But I knew I was ready. I had a great crew, great ship, and we were a wonderful team. We met every commitment on time.”

In a sense, he held increasingly responsible positions in the Navy because of a long list of ifs. For example, if his father Waverly Brinkley (who is deceased) had not been a schoolteacher who operated his own plumbing and heating business. If his mother Anna Jordan Brinkley, now age 93, had not worked as a schoolteacher, as well as a social worker, and probation officer. If he had not married his wife Demetria in 1980 after his first tour. If Joseph A. Jordan Sr., his maternal grandfather had not told him stories about his experiences in the Navy. Well, you get the point.

“I was blessed,” Brinkley said. “I had a lot of support. I had a solid foundation. My parents and my partner helped me. When I retired from the Navy I held various jobs that have been defense related, non -profit, and in environmental protection.”

Brinkley has not only lived in numerous American cities including Washington, D.C., Newport, RI, and San Diego. He has acquired habits that have served him well. “I have been called a stickler regarding time,” he said. I believe time is the most precious resource we have. Once it is gone, it is gone. So you have to maximize every minute. I still get up at 5 a.m. and go for a five-mile bike ride. It energizes me.”

He added, “What’s most important to me after spending 28 years in the service are my wife, two daughters, children, and grandchildren. I want to leave them in a better position than my parents left me so they can do even greater things.”

He is also a member of The Hampton Roads Committee of 200+ Men. The organization has about 140 members. The president is James A. Gray, a council member of the City of Hampton.