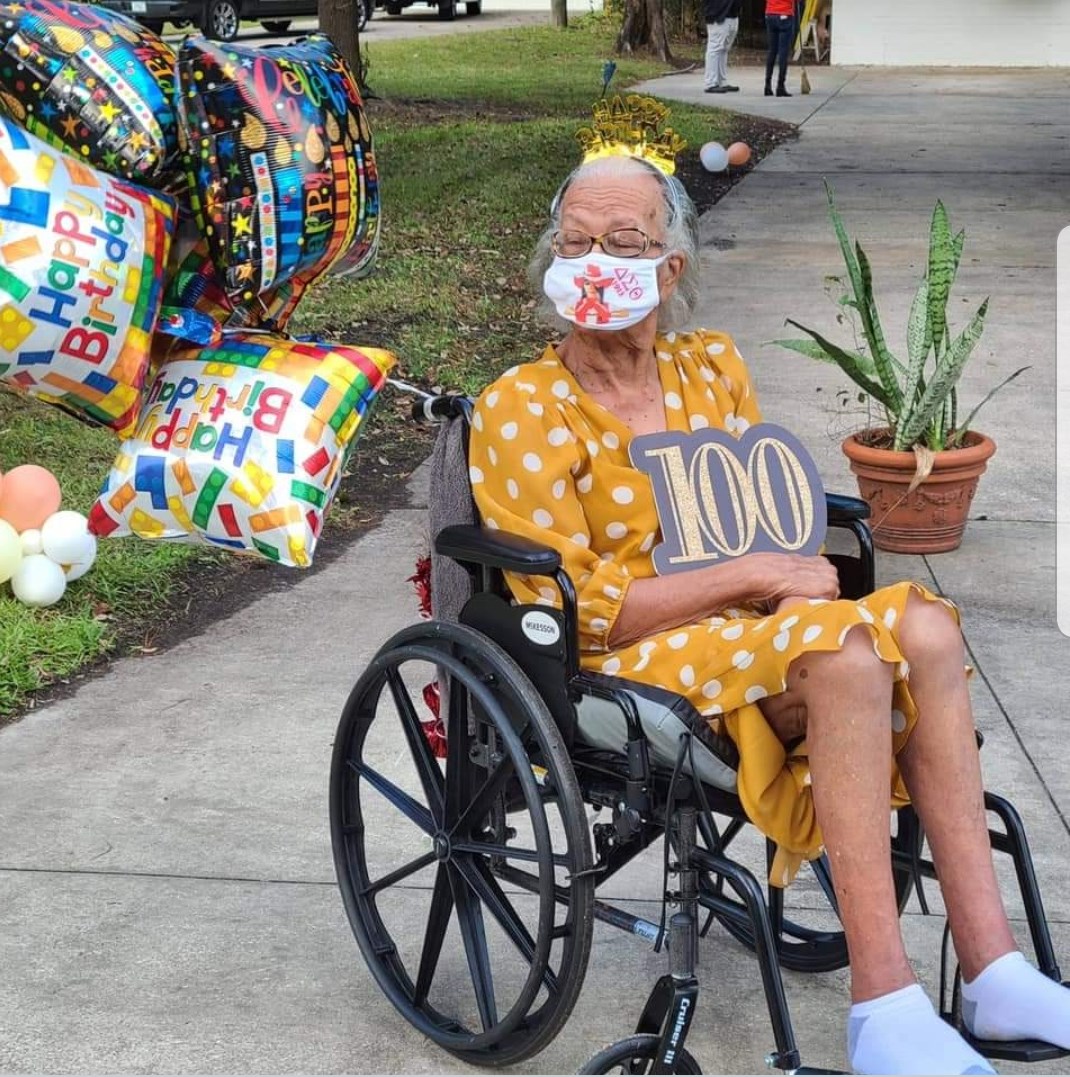 Born November 4, 1920, Yvette Brown Ridley has reached a centennial milestone. Over the weekend, friends and family celebrated this accomplished intellect with drive by love, hugs and many kisses. Cars were lined up and down her northside street honking more than one hundred times for the honoree. Clad in her mask Ridley smiled through her eyes signaling the day was a success.

She was married to Isaac Ridley for 55 years and together they had three children. Ridley was the eldest child of Dr. G.W.C. Brown, Sr., a founder of Norfolk State University in Norfolk, VA.

She received a B.S. in Chemistry from VA Union University in 1941, a master’s degree from Virginia Commonwealth and continued her education at Howard University studying Chemistry of Powder and Explosives. Yvette then attended Hampton University and received a certificate for Engineering Fundamentals.

“A government agent came to speak with the students enrolled in the Engineering Science Management War Training program being offered by Hampton Institute (now Hampton University). As one of the top five graduates of this class, I was invited to interview for employment at Langley Air Force Base in Hampton, VA,” said Ridley.

“The federal agent did not mention the engineering program that I completed, instead the gentleman said, ‘Explain the process of photo engraving.’ I easily explained the process and he said, ‘You’ll do. Go in there and tell them I sent you.’

“Upon entering the employment office, a white woman looked down her nose at me and she said, ‘You are being hired as one of those ‘colored computers’; you can eat in the cafeteria but the rest of you colored people must eat in the kitchen.’”

Due to Jim Crow, Ridley wasn’t flabbergasted; the employment officer’s tone was one of many that she had heard throughout her life. Even though the cafeteria was crowded, Ridley saw one empty table that said “Colored Computers”.

Ridley smiled, “I stole the sign and had lunch with the other four women who came with me. I never ate at the specific table after the first day. I knew it was a federal facility which could not discriminate.”

What catapulted Ridley’s training was the Black newspaper, The Norfolk Journal and Guide, which allowed Ridley to come to their building every day because the paper had a photo engraving lab in which she could use her chemistry training.

Finally Ridley volunteered and was sent to the 16-foot tunnel to work. The engineers accepted her and gave her respect as a college graduate, and engaged in conversation with her regarding her Sunday school teaching acumen and her volunteer work as a den mother for her son’s Boy Scout troop. During her tenure inside the 16-foot tunnel, a position opened up in the ‘X’ building which housed all the top secret projects.

NACA was looking for four Colored Computers to work on computations. The supervisors recommended Ridley for the project and she was selected. It was the first time that Ridley could give her opinion and it was accepted without malice.

In 1955, while working on new planes, an unbiased engineer joined the team and collaborated with Ridley on the X15 where together the team calculated the lift, drag and thrust that gives flight to the F15.

Ridley was employed with NACA from 1943-1957 and is heralded as a role model for the 1960’s Colored Computer NASA Team, based on the movie Hidden Figures.

After leaving NASA in 1957, Yvette moved with her husband who had accepted a position as a professor at Virginia State University (VSU) and was employed at Langley Field Air Force Base as a radar instructor. Once in the perimeter of VSU, Ridley began volunteering at Central State Hospital for the mentally challenged. Motivated by the plight of a family friend that had been institutionalized, Ridley organized activities and functions at the facility and became a vital resource for the doctors and patients at the facility.

Ridley moved to Jacksonville in 2000 to be closer to her two daughters when her husband and mother passed within a week of each other. Ridley has been a devoted member of Delta Sigma Theta for over sixty years. She was chairwoman of the Social Action Committee and Voter Registration in Petersburg, VA and in Jacksonville, FL. Arriving in Jacksonville at age 80, Ridley delved right into reading to students in the Tale Tellers reading program, and became involved in the prison ministries with her church family at Bethel Baptist Institutional Church. Ridley is the proud parent of three children, six grandkids and four great grandkids.