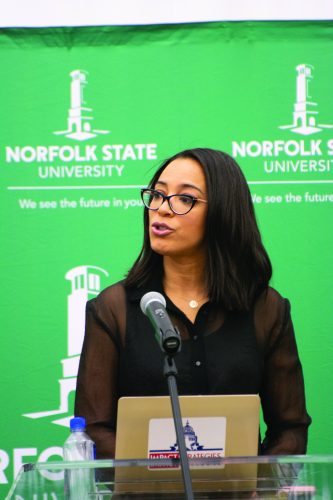 One of the high points of the celebration was the fourth annual Founder’s Day Breakfast where NSU leaders, alumni, staff, students and community partners paid tribute to its past, present, and how it must ready itself and students for the future.

Interim President, Dr. Melvin T. Stith, who graduated from the university fifty years ago, pointed to the vision and leadership of the men and women to create the educational institution 33 years before he arrived as a freshmen.

Speaking to a capacity room of supporters, Stith said his ability to secure career and personal security was “due to me walking the grounds of NSU.”

Stith noted that in 1935 when the Norfolk Unit of Virginia Union University started in rooms of the Hunton YMCA on Monticello Avenue, it was one of four four-year institutions birthed during the Great Depression.

Despite the era of Jim Crow and the depression, the Black business and religious leaders at that time in Norfolk “did not let their current situation dictate their future,” he said,

“They hardly had high schools and elementary schools, if not for the religious community and the other clubs we had in this city. The university is a true testament to the transformative power of education.”

Today NSU has evolved into an academic leader in Cybersecurity, Science, Technology, Engineering, Mathematics, theater arts and business, he noted. Stith applauded the school’s alumni support and enrollment, pointing out the construction of new buildings on campus such as the new Brown Hall and Nurse Education building which will be joined on NSU’s 136 acres by a 732 room residential housing complex.

Stith said a historic marker will be placed on “hallowed grounds” near the new buildings to recognize the importance of the demolished Norfolk Community Hospital which once sat near the campus.

Hospital in Newport News were two Black hospitals which were formed during the Depression, as well.

Before Stith spoke, NSU Foundation Vice President, Brenda H. Andrews, the Publisher of the New Journal and Guide, which is celebrating its 118th anniversary this year, acknowledged one of those “inceptors” of NSU in 1935 was P.B. Young, Sr., who founded the publication and was among community leaders also to found Norfolk Community Hospital.

“Because of people like P.B. Young back then, this university exists today,” she said. “When you came to the campus today, you saw so much growth. Can you imagine that 83 years ago this group of men and women in Norfolk….had so much faith and belief in what could happen. They came together during the great depression to create this dream we now occupy today. Let us give that spirit of empowerment, purpose, and mission an applause this morning.”

She urged them to support Black institutions like NSU and the Black Press.

She continued, “What is being planted today, 83 years from now can come to fruition with our support and encouragement that we can do what God has intended for us.”

This year’s keynote speaker was Angela T. Rye, a lawyer and also a highly regarded political strategist and commentator on CNN, NPR and other news outlets.

She directed much of her speech toward the students and near its end, she challenged them to “Be the change to right the social and political wrongs …” with their talents, their voices on campus and elsewhere.

Before she delivered her speech she paid homage to Congressman Robert Scott and his longtime Chief of Staff Joni Ivy, who recently retired, both who were in attendance. Rye said there were few Congressional staffers who were Black, a trend she said still exists today.

But Scott’s staff, notably Ivey and the late Larry Dillard helped her gain her bearing.

Rye is also a businesswoman and CEO of the IMPACT Strategies, a political advocacy firm in D.C.

She said in the coming weeks she will be working to help elect Stacey Abrams of Georgia and Tallahassee Mayor Andrew Gillum, who are each running to become governors.

Rye said while preparing for her address she noted the core values and mission of NSU, which included, “excellence, being student-centered, diversity, inclusiveness, integrity, stability, engagement, pride and financial empowerment.”

She received applause when she said NSU students and faculty were being asked to adhere to a set of values the current President of the United States“ is not being held to.”

She said since the election of Trump in November 2016, “we have witnessed a digression in this country, racism and oppression, emboldened hate crime and incidents (which are) on the historic rise.” “We have witnessed (the passage) of recreational marijuana laws,” she said. “But we wait to see Black people released from prison who were selling the same drugs. We have seen lives taken in places of worship and schools … because elected officials … have not been able to stand up to the gun lobby and not fix what is broken.”

“We went from Barack Obama to Donald Trump and there is no greater textbook example of White Privilege,” she said. “If we just begin to imagine (Obama) had done half … a fourth … eighth or one-one hundredth of what Donald Trump pulls …”

She told the audience “we are witnessing the enraged unfolding of the deepest forms of hypocrisy in this country today.”

In a rhythmic pattern used by rappers, Rye said, “My responsibility is to wake you up … so the country does not beat you up … a person does not tie you up … nobody can shut you up and you know how to level up.”

Rye said that she does not run from the harsh truth about this country because she wants to work to know why so many of us see it from so many different perspectives.

She said while commenting on CNN or other cable shows, she makes people uncomfortable about the intersection of race and politics.

She said she has been asked “if you hate this country so much why don’t you leave?”

Her reply is, “No this is my country as much as it is yours. And if I really want to feel froggy,” Rye said, “I say, we built this joint for free.”

Follow us
In this article:83rd, Angela Rye, Birthday, Norfolk, NSU