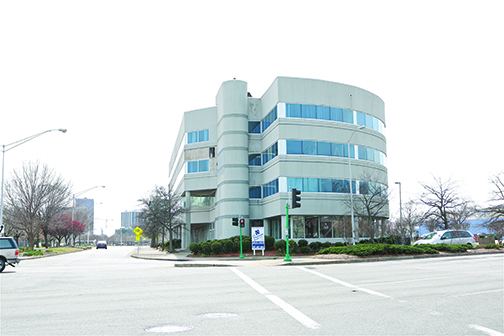 By the end of the year, all of the tenants in the building at 645 Church Street, once the most prominent Black-owned business and office complex downtown, will be gone.

The current owners of the building, 645 Church Street LLC, based in California, notified all of the tenants several months ago that their leases would not be renewed.

They have been given until November 30 to vacate, according to Ned Williams, a Real Estate Property Manager for Harvey Lindsay Real Estate, which is overseeing the property for the current owners.

Last weekend the Christian Broadcasting Company (CBC), once known as Willis Broadcasting which was located on the fourth floor of the building, completed the final phase of its exodus from the building.

According to a company representative, the CBC will be moving to 5335 East Virginia Beach Blvd., to a one-story storefront building.

Katrina Chase, a friend of Bishop Levi Willis, who founded Willis Broadcasting, is the CEO of CBC.

Currently, there are less than five tenants in the building, including longtime occupants Hortense Barbershop and a tax preparation outlet on the first floor.

Dr. La Francis Rodgers-Rose, Founder, and CEO of the non-profit, said IBWC moved into the building in 2000. She said the IBWC will move as soon as she can find facilities with space enough to accommodate her staff and operation.

Currently, the IBWC operation occupies two units and 2300 square feet in the building, she said.

The IBWC, at its origin, was located at the 555 Fenchurch Building. It was built by a coalition of a Black medical professional in the 1960s.

When it slowly eroded structurally and lost tenants, it was razed.

She said apart from adequate space, the cost of rent in the “new Norfolk,” west of St. Paul’s Blvd., is a factor. Many small Black businesses and non-profits with limited incomes, can’t afford to operate downtown.

“But we still want to stay in the general area where most of our clients live and can access our offices,” said Rose. “But the cost of renting in downtown Norfolk, which is undergoing a change is very high. We are looking at several spaces. But I am hoping we will be out of here by November.”

Williams said that once the building is empty, it will be refurbished physically, and “repurposed” into commercial and perhaps residential use.

He said the building, which is worth about $2.2 million, needs extensive internal, electrical and other mechanical updating to meet city structural codes.

He said the building is structurally sound but is 30 years old. He said he could not define how much it would cost to upgrade the facility at this point.

He said he expects all of the current tenants will be gone by the end of the year.

Williams said the proposed revitalization of the St. Paul’s Quadrant, including the razing of the nearby Tidewater Garden Public Housing Community, “would be a positive influence on the future of the building.”

At a recent meeting of the St. Paul’s Advisory Committee, two members, Dr. Ruth Jones Nichols, the CEO of the Food Bank, and Vice Chair Angelia Williams Graves, a member of city council, expressed concern about the proposal to remove current business entities from the development zone.

Graves said many of the businesses had remained despite the lean times and conditions of the area, and are now being pushed out.

She said she recalled the St. Paul’s Plaza, a commercial destination for shoppers which was razed due to city redevelopment, and the businesses that were pushed out.

During a presentation at the August 22 meeting of the advisory panel, a suggestion was made that a convenience store which provides gas, a McDonalds and Popeyes Fried Chicken be provided alternate sites close to the area to provide service and employment.

The 645 Building was originally built in the mid-1980s, according to city records. Bank of America had designs on using it.

But those plans changed and it was sold in 1987 to Willis Broadcasting owned by the family of the late Bishop L.E. Willis.

Willis was a prominent leader in the national and local Church of God in Christ (COGIC) and a businessman.

When Willis died in 2009, the ownership of the building was transferred to the family.

The building was sold in the summer of 2017 to investors in California, according to Ned Williams of Harvey Lindsay Commercial Real Estate in a story which ran in the GUIDE last year.

According to Williams, the mortgage loan on the building had been foreclosed on and the building was no longer owned by Willis Broadcasting and the family.

When it was initially sold to the California entity, the building was being managed by the S.L. Nusbaum Real Estate in Norfolk. The company at the time managed the building and collected rents from the tenants.

The company also coordinated the rehabilitation of the five-story building last year which involved repairing the roof and interior upgrades. Huge tiles blown off the north side of the structure during a hurricane in October of 2016 were replaced.

Follow us
In this article:Building, Church Street, Norfolk, Willis