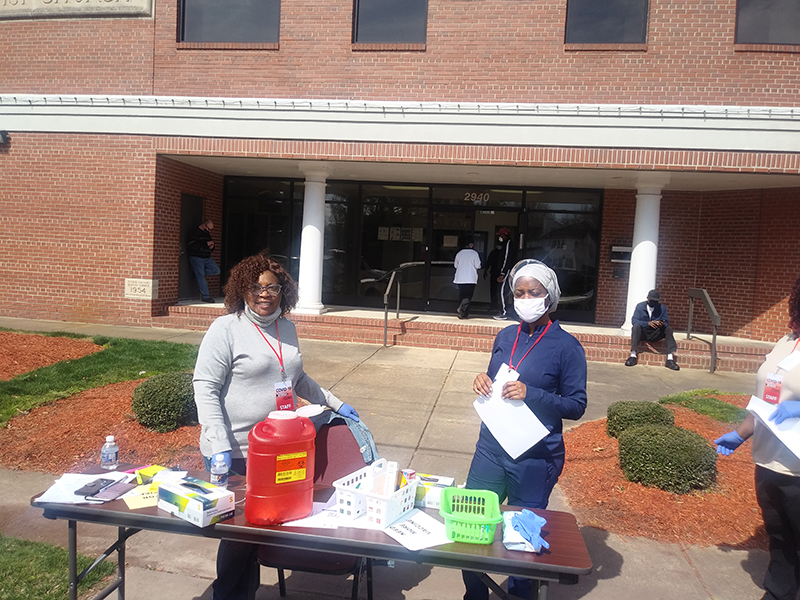 According to the Virginia Department of Health (VDH), 14,000 Virginians get a dose of the COVID-19 vaccination per day. Last Sunday (March 14) at Second Calvary Baptist Church, near NSU, 1,770 Hampton Roads residents who registered for a “poke in the arm” received their initial dose of the Pfizer COVID-19 Vaccine.

According to Rev. Dr. Geoffrey Guns, the church’s Senior Pastor, the mass vaccination clinic at his church was one of five that African American churches have organized in Norfolk as the national vaccination effort has ramped up.

This and other church-sponsored clinics were a collaborative operation with a coalition of various healthcare related organizations, including the Norfolk Medical Society, and medical professionals to include administrators, physicians and nurses, the Pastor said. The vaccine for these mass events held recently in the urban core of Norfolk, he said, have come from the Hague Pharmacy which shared its stockpile of the vaccine.

Nicole Guns, the Pastor’s daughter, supervised the operation in an activity space in the church, and was one of the 120 healthcare specialists to “work on their day off” as volunteers to administer the shots and perform other duties.

Rev. Guns said that most of the participants who received a shot were on the state’s registration list and Sunday’s shot was their first. They can receive their second poke in the arm on April 4 Easter Sunday

if they are registered. Another “pop-up vaccination clinic event for people who had pre-registered was held later after the March 14 event.

Guns said although people must register to get a shot from the limited supply on hand, there are people who do not show up.

So people are placed on a “standby list” to be served after all of the “registered and present” participants have received their doses. Also, skilled clinicians are able to get more doses out of a container and expand the number of people who are “given a poke” in the arm.

“There is an idea out there that African Americans do not want to take the vaccination.” said Rev. Guns. “Some people out there do not. But as a group, that is not categorically true for African Americans. They want to live and protect the lives of others and are eager to take