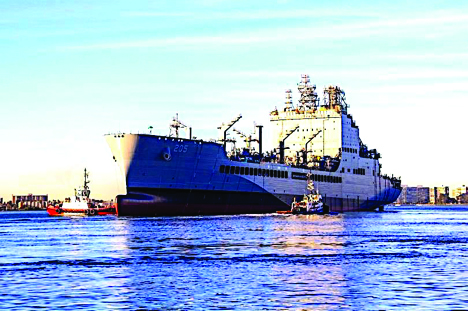 LOS ANGELES, CA
The Navy’s newest vessel the USNS John Lewis was christened in a public ceremony on July 17, 2021, one year after the Congressman’s passing.

A Congressional delegation led by House Speaker Nancy Pelosi (D-CA) traveled to San Diego to participate in the Christening Ceremony. The USNS John Lewis is the first ship in the T-AO Fleet Oiler Program.

The program was dedicated in honor of the late Congressman John Lewis of Georgia.

“John Lewis’ legacy and impact on this world is undeniable and I am so pleased to join Speaker Pelosi for this Congressional delegation to honor our beloved friend and guiding light,” said Congresswoman Maxine Waters.

“John Lewis was more than a fighter. He was a giant who looked injustice in the eye, rolled up his sleeves, and got to work. He was an incredible and fearless leader of the Civil Rights Movement and worked tirelessly to make sure that the United States lived up to its promise of equality and justice for every person. I was very proud and honored to walk across the Edmund Pettus Bridge in Selma, Alabama every year in recognition of the struggle that took place where John Lewis was almost beaten to death.”

“As we continue John Lewis’ fight against voter suppression legislation one year after his passing, the way in which he lived his life and advocated for an inclusive and fair democracy continues to be a source of inspiration during these trying times,” continued Congresswoman Maxine Waters.