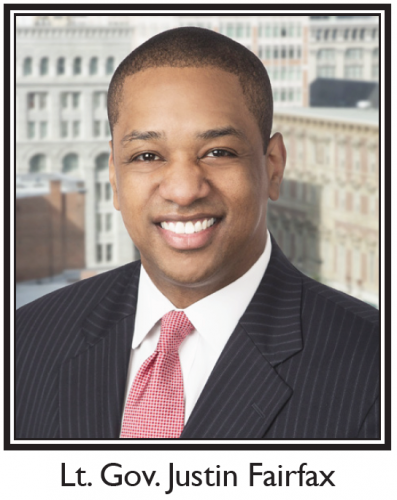 In an Op-Ed entitled, “I Will Attend Virginia’s 400-Year Commemorative Events Honoring Enslaved Africans and Our Democracy – Whether President Trump Is There or Not,” Lt. Governor Justin Fairfax says he will be present on July 30 in Jamestown for 400th anniversary commemorative events.

After it became know that President Donald Trump had been invited to speak during the 400th anniversary of the meeting of the Virginia House of Burgess, the first representative body formed by an English Colony, four of the state’s top Democrats tweeted they planned to boycott. Other Democrats have joined the boycott.

Fairfax, the state’s highest elected African-American, wrote, “The celebration of the birth of democracy in America and the honor of standing in the footsteps of my enslaved ancestors as a statewide elected official far supersede the petty and racist actions of the current occupant of the White House.

“I intend to honor, in this 400th anniversary year, our proud achievements as a representative democracy and the achievements of the enslaved African-Americans and their descendants who have contributed mightily to Virginia’s success. That is more important than the frenzied and fickle politics of the moment.”

This is a year when we observe the 400-year history of Virginia’s high and low moments – the birth of representative democracy in the Commonwealth and the forced landing of enslaved Africans at Point Comfort in Hampton, Virginia. We reflect upon the importance of democratic institutions we’ve built as a nation and remember the ongoing ills caused by Virginians adopting the evils of slavery and racial oppression.

The celebration of the birth of democracy in America and the honor of standing in the footsteps of my enslaved ancestors as a statewide elected official far supersede the petty and racist actions of the current occupant of the White House. The bigoted words of the current President will thankfully soon be swept into the dustbin of history. Our democracy, born in Virginia, will live on.

I intend to honor, in this 400th anniversary year, our proud achievements as a representative democracy and the achievements of the enslaved African-Americans and their descendants who have contributed mightily to Virginia’s success. That is more important than the frenzied and fickle politics of the moment.

Those enslaved Africans who have been cast into eternity largely with anonymity need us now to stand up and recognize their lasting contributions and to celebrate their faith, perseverance, and triumph of spirit in the face of unimaginable cruelty and seemingly insurmountable odds.

In their own way, each of them and their families heroically rose to the call of history and made progress possible for future generations despite being denied their basic humanity, due process, education, or a place of dignity in our society. With God’s aid and grace, they made a way out of no way. And, they kept the bright flame of hope burning in the abject darkness of the midnight of slavery – a flame that ultimately lit a path from slavery to freedom.

I am fortunate and proud to be able to know that I am the great-great-great grandson of Simon Fairfax, a man who was enslaved but freed in Virginia by the 9th Lord Fairfax on June 5, 1798. Simon, along with his family and ancestors, made a significant difference in their community and contributed positively to our Commonwealth’s history.

It is with Simon and so many others known and unknown in mind that I will proudly show to all in attendance that no national leader can diminish Virginia’s continuing efforts to cast aside its racist past and move forward as a state built on the blended contributions of Native Americans, enslaved Africans, settlers from Europe, and later immigrants from across the globe.

After a complex and often tragic and triumphant 400 years, that, in total, is the Virginia I will be proudly honoring.

As only the second African-American statewide official ever elected in Virginia, I am well aware that Virginia was first among all states to popularly elect an African-American Governor, the Honorable L. Douglas Wilder. It was Virginia that provided the electoral votes to assure Barack Obama’s election as the first African-American President in November 2008. It is Virginia that continues to work to overcome the cruel and lasting legacy of racial segregation and massive resistance.

It is Virginia that has thrived with a workforce that is more than 15 percent foreign born and a population that is becoming dramatically more diverse every day. It is Virginia that is moving forward as a Commonwealth dedicated to bettering the lives of its residents and expanding the oxygen of opportunity to all. These are proud results of representative democracy in our Commonwealth.

These extraordinary achievements, accomplished by rising to the better angels of our nature, often in the face of committed and nefarious foes of progress, will outlast the hateful and racist words and actions of our current President. It is those accomplishments that I intend to honor by participating in commemorative events that will observe 400 years of Virginia’s history.

The enslaved Africans who were forced to land in Virginia in 1619 likely could never have dreamed of stepping foot in the halls of the newly formed government as anything other than servants to their masters in the legislative body, 400 years later, one of their African-American descendants presides over the Senate of Virginia as Lt. Governor and is officially titled, “Mr. President.”

That remarkable and improbable journey of the generations is exceptionally worthy of commemoration and celebration.

Follow us
In this article:Honoring Enslaved Africans & Our Democracy, Lt. Gov. Fairfax