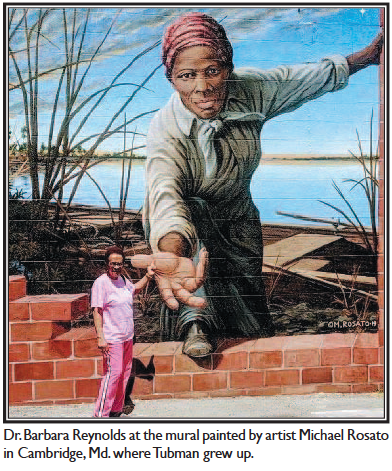 TriceEdneyWire.com
For a nation built on truth, abolitionist, freedom fighter, ex-slave Harriet Tubman should have the acclaim of a Paul Revere, or Patrick Henry whose courageous lines “Give me Liberty or Give me Death” guided the American Revolution.

Tubman, whose battle cry was to ‘’live free or die” and revolt, guided another revolution. It was to end slavery which changed the color, content and character of America today.

Finally, through the newly released epic movie Harriet, this revolutionary warrior, born into slavery in 1822 in Dorchester County, Md., has emerged from the back alley of history to take her rightful place as a larger than life action figure, a true American hero. Unlike the heroes spun from Marvel comic strips or the Terminator franchise, Harriet Tubman is not fake, fantasy or make believe although her expansive accomplishments are more real than can be imagined.

Don’t think you are going to see the serene, sedate elderly Harriet of our textbooks. This is the Harriet of her youth, jaunting up rocky cliffs, jumping off bridges and even shooting a White slave owner with her pistol.

Through the skillful talent of British-born actress, Cynthia Erivo, the film – released Nov. 1 – features Tubman not only as yesterday’s heroine, but as a model of courage for today. Risking certain death if captured, often with a pistol in her waistband, she escaped from bondage on Maryland’s Eastern shore and returned often in disguise to rescue more than 70 family and fellow slaves. She became a leader in the anti-slavery Underground Railroad, the women’s suffrage movement in her long standing struggle against systemic gender and racial inequality.

During the Civil War, she served as a nurse, scout and spy for the Union army and became the first woman to lead an armed expedition in the war guiding the raid at Combahee Ferry, which liberated more than 700 slaves. Unfortunately her heroism did not guard her from racism as she was originally denied the pension benefits granted to White soldiers.

In heart-aching detail the movie does not sanitize the horror of slavery; nor does it gloss over the power of God in her life. Scenes of blood-soaked whips, scarred backs of enslaved men and women, screaming children torn from their families to be sold by Whites trading them as if they were dispensing sows from a pig pen – It’s all there. But there is another story that shines through, one of Black love, Black loyalty and a determination of the enslaved to live free or die and the eventual embrace of the long awaited freedom. It’s all there.

In the movie, we see Harriet after learning she is to be sold south, which rumors say is more brutal than the plantations on Maryland’s Eastern shore, leave her family and the love of her life, her husband John Tubman, traveling 100 miles alone to freedom in Philadelphia through the aid of the Underground Railroad.

Though the term railroad might prompt visions of nice cushy seats, this railroad Harriet traveled was a harsh pathway through snake-filled marshes, woods, and deep rivers. Often, the flight of this woman known to some as the SHEMOSES was made even more treacherous as armed posses with baying hounds chased her to collect the rewards for her capture. But they never caught her. She once boasted that her railroad never ran off track and she never lost a passenger.

In the movie she declared she had only the North Star and we see her on her knees looking up to the heavens in deep communication with the God she depended upon to shield her from her enemies.

My favorite scene is when the only choice for a band of freeing slaves was to either turn back or cross a treacherous river. While her family cowered, frozen on the riverbank for fear of following her and drowning, she lifted her pistol above her head wading in the deep water as she prayed aloud. Slowly the waters receded; as her feet touched dry land her family members jumped in and crossed over as well.

The two -hour epic directed by filmmaker Kasi Lemmons who also wrote and directed Eve’s Bayou, sends the audience away with an inspirational song, entitled, “Stand up,” co-written by Joshuah Campbell and the film’s leading lady Erivo.

The song sets just the right tone for Harriet enthusiasts to continue celebrating Harriet. President Obama had selected her to become the first person of color to be represented on any of the nation’s currency, replacing Andrew Jackson on the new $20 bill. Not surprisingly in June 2019 the Trump administration delayed the launch.

Nevertheless, in Maryland, Harriet enthusiasts have other ways to celebrate her. Painted on the side wall of the Harriet Tubman Museum & Education Center in downtown Cambridge, Maryland—just a few miles from where Tubman grew up, is a 14’ X 28’ mural featuring Tubman offering an outstretched hand.

Not long ago, I placed my hand in her outstretched hand, thanking her for giving me the inspiration some 20 years ago to start a ministry at Greater Mt. Calvary Holy Church, under the leadership of Bishop Alfred Owens. Its purpose was to inspire people to have the courage and faith to break the chains of any addiction keeping them from living their best lives. In the ensuing years, scores have broken free following in her footsteps of ending their personal bondage.

In March 2017, the Maryland Park Service and Maryland government opened the Harriet Tubman Underground Railroad State Park & Visitor Center in the heart of the Choptank River Region where Harriet grew up. It’s a 17-acre facility that has already been visited by nearly 200,000 guests from all 50 states and over 60 countries. In her honor the Service has also established the Harriet Tubman National Historical Park in Auburn, NY.

Tubman is the only U.S. woman to be honored by the Service with two parks.