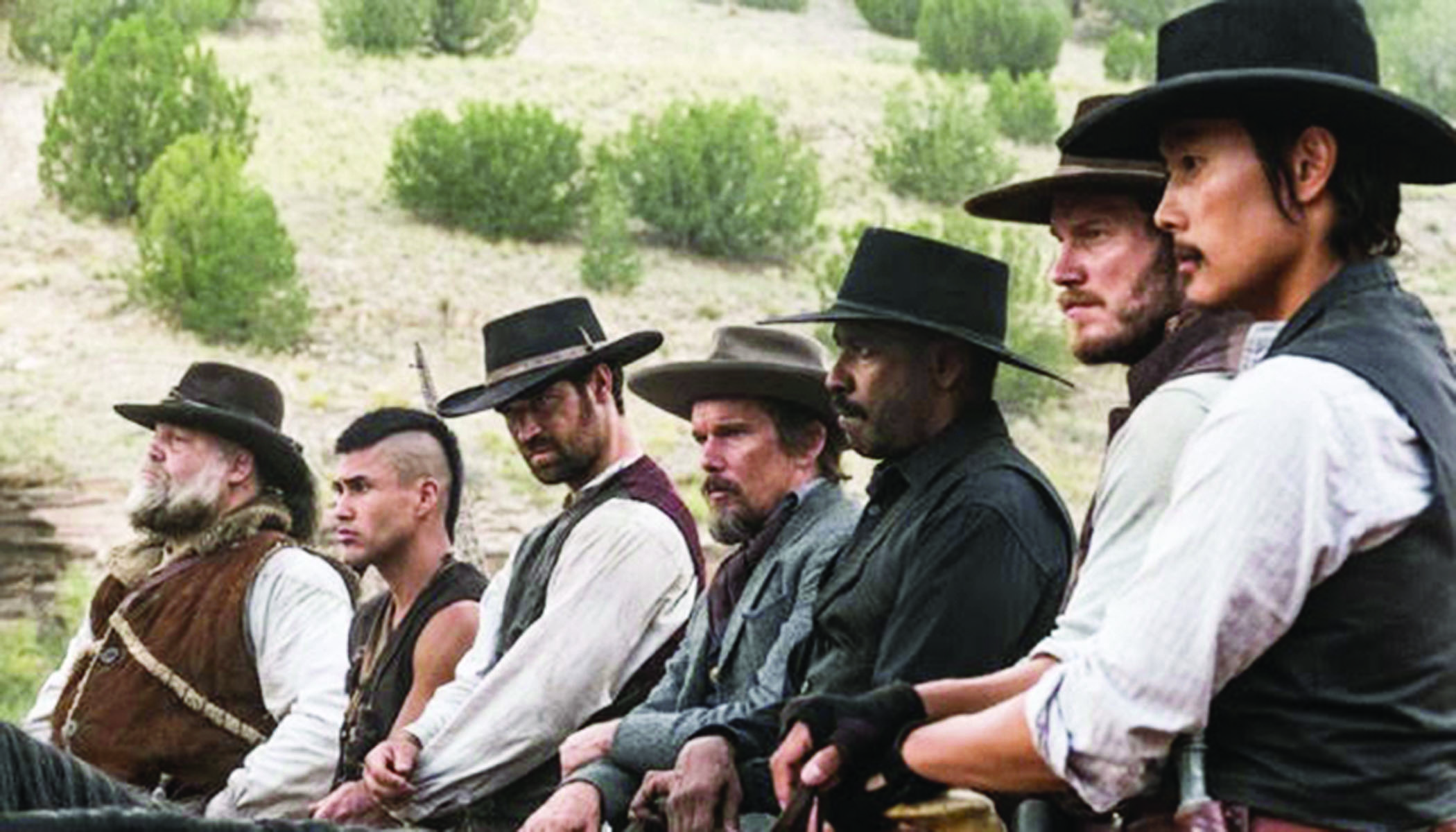 In the original 1960s “The Magnificent Seven,” seven gunfighters assembled to help a Mexican peasant village fight off villains. That’s the basic premise. This 2016 version is an update that blends old classic Westerns with a new Western genre. What’s on view in this kick-ass cowboy movie are solid production elements, alpha male acting, gritty direction and tense and compelling storytelling.

For those who aren’t old enough to remember the first M7, Russian-born actor Yul Brynner played the lead gunfighter and the other six were largely icons of the time: Steven McQueen, Charles Bronson, Robert Vaughn, James Coburn, along with Brad Dexter and Horst Buchholz. Screenwriters Richard Wenk and Nic Pizzolatto have created a unique blend of innovative action sequences and macho characters. The former wrote action-heavy movies like “The Equalizer” and “The Mechanic.” The latter, was a novelist and short story writer before he became a scribe for HBO’s “True Detective” series.

It’s 1879, somewhere in the West. The small town of Ross Creek is at the mercy of a gold mining baron, Bartholomew Bogue (Peter Sarsgaard), who is practically stealing the land from underneath the locals. Bogue: “I came here for greed.” When the landowners complain, he and his men shoot them, their wives and children. Their mistake is killing the husband of Emma Cullen (Haley Bennett).

Mrs. Cullen hires a gunslinger, Sam Chisolm (Denzel Washington), who hunts criminals for money. He’s classier than an ordinary bounty hunter, but not by much. Chisolm is reluctant to take on the assignment, until he learns the name of the scoundrel, who killed her spouse and menaces her town. One by one Chisolm assembles his team of killers: Josh Faraday (Chris Pratt) a con man/gambler. Goodnight Robicheaux (Ethan Hawke), a former Confederate army marksman and his Asian partner Billy Rocks (Lee Byung-hun), who throws knives with pinpoint accuracy. Jack Horne (Vincent D’Onofrio) a big, burly man. Vasquez (Manuel Garcia-Rulfo) is a tall imposing Mexican gunman. And Red Harvest (Martin Sensmeier) is a Native American who shoots arrows that don’t miss. As the men ride into Ross Creek blowing away henchmen, they send Bogue a clear message: Get out of town.

The multi-racial cast is a pleasant update. In the ‘60s version Eli Wallach, the son of Jewish immigrants from Poland, played the Mexican lead villain. Thankfully, casting choices are different these days. Six out of the seven don’t carry enough extra psychological baggage to give them depth. But Hawke’s character is the exception. His Goodnight Robicheaux, the ex-Confederate soldier who’s suffering from post traumatic stress disorder (PTSD), struggles with viable inner turmoil, even when he’s being philosophical: “What we lose in the fire we’ll find in the ashes.”

With Antoine Fuqua (Training Day) as the director, you can count on well-choreographed action scenes and perfectly measured out violence – and that’s what you get. Fuqua is up to the challenge of making the classic western genre relevant today. His direction exhibits a respect for the work of the original film’s director John Sturges, and for the legendary Japanese filmmaker Akira Kurosawa, who directed and wrote Seven Samurai, the 1954 film that spawned The Magnificent Seven dynasty.

The director’s efforts are near perfectly augmented by above-par technical elements. The West looks especially dusty and sunny through Mauro Fiore’s (Training Day) lens. Production designer Derek Hill built the dust bowl town from the ground up outside of Baton Rouge, Louisiana. The duds the men wear look like they were bought in Tombstone’s general store (Costume designer Sharen Davis, Ray and Dreamgirls). James Horner and Simon Franglen’s musical score is grandiose enough to compete with the heavy action sequences.

In a career that spans decades, on camera and on the stage, Denzel Washington has never played a cowboy. Clad in Black with a stare that could kill buffalo, his domineering performance kicks up a lot of prairie dust that settles on every character, every scene. It’s his movie and the supporting cast looks great around him. Hawk’s performance is the most complex. Sarsgaard is the most evil. D’Onofrio is very eccentric, which throws the whole group off in a very entertaining way. Haley Bennett, as the determined widow, underscores the relentless determination of the crew to overthrow outright tyranny.

The new gold standard for Hollywood Westerns has ridden into town. It’s respectful of the past, while it blazes into the future of a genre that is as American as covered wagons.
Dwight Brown is a film critic and travel writer. As a film critic, he regularly attends international film festivals including Cannes, Sundance, Toronto and the American Black Film Festival. Read more movie reviews by Dwight Brown here and at DwightBrownInk.com.