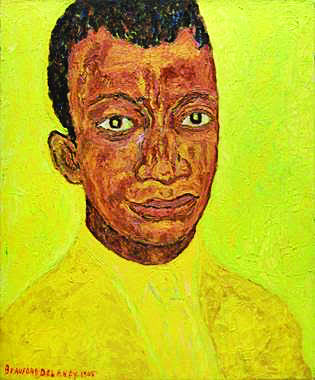 NORFOLK
As part of its Black History Month offerings, the Chrysler Museum of Art will host a Gallery Talk and Reception on Saturday, February 27, 1 p.m. for its newly acquired African-American painting by Beauford Delaney. The following day, the museum will present Influences in the Chrysler Collection at 1 p.m. Admission is free for both events, The Delaney talk will given by Alex Mann, Brock Curator of American Art. The curatorial tour will be followed by an informal reception.

The 1965 portrait painting by Beauford Delaney (1901-1979) depicts celebrated writer and activist James Baldwin (1924-1987) who was a close friend and mentor of the artist. The 25-by-21-inch oil on canvas painting, previously held in a private collection, presents Baldwin’s face larger-than-life, set against a bold background of fluorescent yellow.

“Beauford Delaney’s expressive style of painting is unique and unforgettable, and we are proud to add this important artist to our permanent collection,” says Erik Neil, Director of the Chrysler Museum of Art. “It is especially meaningful that this picture testifies to his friendship with a fellow African-American creative genius, the literary giant James Baldwin.”

The painting went on public view in January in the Chrysler’s Roberts Wing for American and European Art and appears alongside other major works from the early and mid-20th century in Gallery 221.

ABOUT DELANEY AND BALDWIN

Though Beauford Delaney was born in Knoxville, Tenn., his family has Virginia roots. His maternal grandmother, Susan Johnson, was a free Black born in Norfolk, and is thought to be a descendant of some of the first free Black colonists on Virginia’s Eastern Shore. His mother, Delia Johnson Delaney, was born into slavery in Virginia in 1865 during the final weeks of the Civil War, and his father, the Reverend Samuel Delaney, a Methodist minister and barber, also was a native of the Commonwealth.

Delaney studied at the Massachusetts Normal School, the Copley Society, and the South Boston School of Art. In 1929 the building cultural momentum of the Harlem Renaissance drew Delaney to New York City. There he met painters Jacob Lawrence and Romare Bearden, poets Langston Hughes and Countee Cullen, and many other leading members of this vibrant community.

“As an artist, Delaney bridges two divergent movements within American modernism,” explains Alex Mann, the Chrysler’s Brock Curator of American Art. “His visual style has layers of color, learned from Cezanne, and the rich surface texture of Van Gogh, two painters he deeply admired. However, just under the surface there are rhythms of jazz, gospel, and the blues – the spirits of Harlem and his childhood in the South.”

Delaney created at least 10 portraits of Baldwin. Among them, the Chrysler’s 1965 oil painting is one of the largest and mostly highly finished.

The Chrysler Museum of Art acquired the painting from the Delaney Estate, with assistance from a New York-based fine art dealer. Other portraits of James Baldwin by Delaney are in the collections of the Philadelphia Museum of Art, the Clark Atlanta University Art Galleries, and the Smithsonian National Portrait Gallery in Washington, D.C.