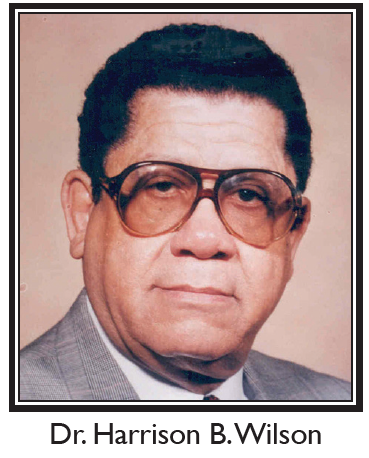 An extraordinary comm-unity and educational leader.

An innovative and thought-ful advocate for HBCUs.

Those were just some of the descriptions of Dr. Harrison B. Wilson, Jr., former president of Norfolk State University, who died July 28.

In a statement, newly-installed NSU President, Dr. Javaune Adams-Gaston said, “The Spartan family mourns the loss of one of its stalwart champions. Dr. Wilson’s legacy is embedded in Norfolk State University. He had a transformational impact on the lives of countless individuals. He embodied the spirit and history of this great institution, and we are grateful for his many contributions. He will be deeply missed by all of us.”

Shortly after Wilson arrived in 1975 from Fisk University, where he had been Executive Assistant since 1971, the GUIDE ran an editorial stating that Dr. Brooks was a ”hard act to follow.”

Called Norfolk State College at that time, the editorial said the school had “tremendous growth during the 37 years of Dr. Brooks.”

“It needs a president of actions and administrative experiences, and Dr. Wilson was selected because he fits the bill.”

The editorial went on to say Wilson “comes to Norfolk State College at an important period” in the life of the school.

NSC then was the third-largest HBCU in the country and, according to the Op-ed, “faces vital problems in the life of Blacks on the local scene.”

Wilson, according to long-time faculty, did not disappoint and he “hit the ground running,” seeking to craft his legacy.

When Wilson arrived in 1975, the school had four graduate programs and 191 students. There were about six buildings on campus and it was basically a commuter campus.

By the time Wilson retired in 1997, Norfolk State (then) University had 14 master’s programs, one doctoral program, enrolling 1,110 students. The Division of Academic Affairs was composed of nine schools, 29 departments, offering 56-degree programs at the associate (2), baccalaureate (39), master’s (14) and doctoral (1) levels.

“He hit the ground running,” said Hayes. “He immediately exerted command leadership and respect not only locally but throughout the Commonwealth. He arrived at a very crucial time as we saw enrollment expand, growth in computer sciences, the school of business, arts, the band, and athletics.”

Rev. Dr. Keith I. Jones is now the senior pastor of the Shiloh Baptist Church which sits across the street from the NSU campus.

When Wilson arrived, the Political Science major was the newly elected Student Government Association President. Wilson was making the rounds introducing himself to Tidewater

“I first met him at WRAP-AM radio station … when it was located in the Downtown Plaza on St. Paul’s Blvd.,” said Jones. “What was planned as a 30-minute conversation lasted an hour and a half.”

Jones recall Wilson inviting executives from top corporations like IBM to the campus to meet with faculty and students.

“He believed in community development and linking the campus to the community,” said Jones, who received a commission into the U.S. Army, where he served for over 20 years. “This was his way of developing the students to be ready to employ and become leaders.”

Jones recalled that before Wilson’s arrival, the campus had experienced unrest over student housing and other conditions at the school. The previous administration had shut down the student newspaper and yearbook.

“The students had been silenced by the administration,” said Jones. “He (Brooks) did not tolerate dissent. But Wilson believed students had a voice and he reinstated the paper and yearbook.”

Dr. Tommy Bogger, who is the NSU Archivist, recalls that Dr. Brooks and Dr. Wilson were very innovative and thoughtful, but had different personalities.

Brooks was more reserved while Wilson was more assertive and outgoing.

“Brooks had the dream,” said Bogger, “and Wilson brought the growth and expansion of campus and programs to fruition.”

Today, NSU has expanded to face Ballentine to the east and Park Avenue on the west.

Once deemed a commuter campus, Wilson launched a building campaign that created more academic buildings, housing for students and the Dick Price Stadium.

Annette Montgomery is now the NSU Assistant Archivist. The Suffolk native was among the first freshman class of the school when it acquired its “university status.”

“The campus was small then, but for me it was big … overwhelming … there were a lot of students that year,” said Montgomery. “I recall going up an elevator in the library. The administration building or Wilson Hall was not built at that time.

“The president’s office was on the third floor of the library. I first met him when he got on that elevator going to his office. He asked if I was okay and what was my name.”

Montgomery said only Gill Gymnasium, Brown Hall and the library (named for Dr. Brooks) had names. The others were “called the communications” building, etc.

In 1986, she was hired as an assistant in the school’s archives department.

Wilson had acquired funding for it and it is named in his honor.

“He was always in Richmond lobbying for the school,” she recalled. “He wanted to make sure that NSU was not left out and got what it need for the students and faculty.”

But Wilson was known by many to vent his frustration about disparity in the funding between NSU and traditionally white institutions.

“He was always borrowing from Peter to pay Paul,” said one long-time NSU hand, not retired who spoke on the condition that his name not be used. “He had to go to Richmond for money, or write grants for this or that program. He knew he had to compete with the white schools which had more resources. He never backed down trying to keep the school competitive.”

W. L. “Bill” Thomas, Jr. is Associate Vice President for Governmental Relations at Hampton University. He arrived in Hampton Roads in 1988s as an executive at the now defunct Atlantic National Bank, once the largest Black-owned Bank in the region.

Thomas recalled that Wilson was interested in Black business development. He, Wilson and Herman Valentine, the founder of SMA, a significant Black-owned computer development company often discussed ideas on how to make that happen.

“He was a community person … he commanded attention and respect,” Thomas said. “People listened to him as the voice for NSU when he talked about his students and his school.”

Thomas recalled that he and Wilson had a mild disagreement “over the fact that I felt he should have been more aggressive in seeking funding for his school.”

“He felt the people in Richmond … were not listening and did not value the school, as they did ODU,” Thomas said. “I did not agree with his approach. But it worked for him.

“He knew his school was not getting the funding it needed, ”Thomas said, “and that impacted the students who enrolled at NSU. They lived in poverty … attending underfunded public schools. But he got funding to help those students who were struggling to succeed.”

Cecelia Tucker, the Special Assistant to the ODU president today, recalls meeting Wilson and his family when he arrived in 1975. She recalled Wilson invited her to various events on campus.”

“And he also reached out to me for help on various programs and projects,” she said. “He was the quintessential leader and a man for all seasons.”

Rev. Anthony Paige, said that Wilson “did not isolate himself on that campus … he was a community man.”

“What we see now was his vision,” said Paige Senior Pastor of First Baptist Lambert’s Point. “He believed that school should be a part of the community and the region … not an island.”

Wilson, born in Amsterdam, New York, served in the United States Navy from 1945 to 1947. He enrolled at Kentucky State University and received his B.S. degree. He was also an honor student and multi-sport student-athlete.

He was the head basketball coach at Jackson State University from 1951 to 1960 and chair of the Department of Health and Physical Education from 1960 to 1967.

A college basketball coach for 16 years, Wilson amassed a record of 340 wins and 72 losses.

Wilson married first wife, Anna, who died in the late-1960s due to complications from surgery.

He is survived by his wife, Dr. Lucy Wilson, his children, grandchildren, including Seattle Seahawk’s quarterback Russell Wilson, and a host of family and friends.

Follow us
In this article:Dr. Harrison B. Wilson Jr., HBCU, NSU