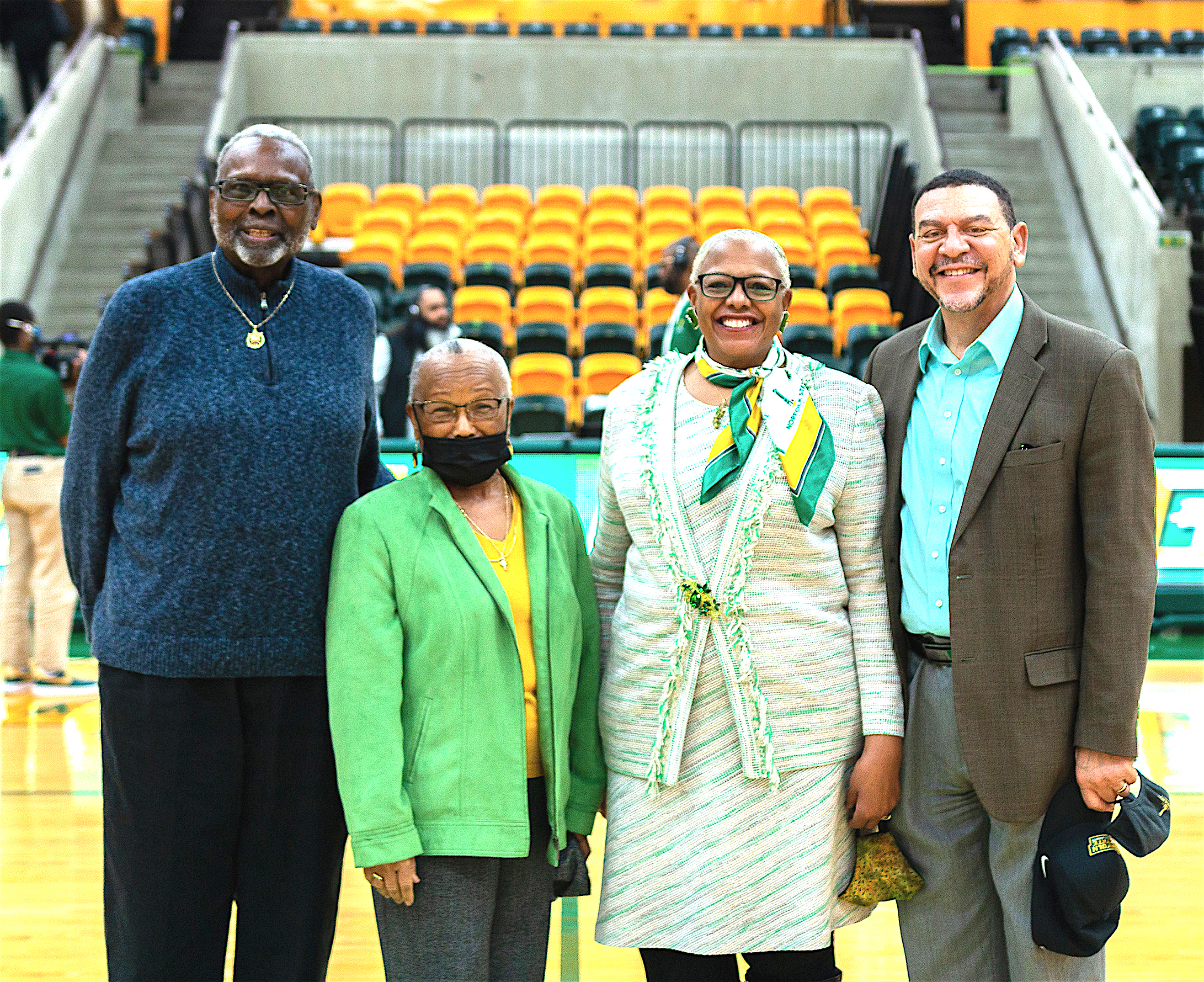 Special To The Guide

NORFOLK
Shedrick Byrd has been there for the Norfolk State University (NSU) student-athletes for more than 40 years. Thanks to his recent commitment to an endowment in his name to benefit the athletics programs, his influence for Spartan student-athletes will be there in perpetuity.

A native of Brandon, Mississippi, Byrd left Mississippi at the age of 13 when his family moved to Gary, Indiana. He graduated from high school in Gary in 1957 and moved to Ann Arbor, Michigan where he in 1959 joined the U.S. Navy. He retired from the Navy in 1978.

In 1962, the Navy sent Byrd to Norfolk. Except for a three-year tour of duty (1964-67) in Sasebo, Japan, onboard a degaussing ship that made three trips to Vietnam during the heat of the war, Byrd spent the rest of his Navy career in Norfolk. After returning from Japan, Byrd worked part-time at the Virginian-Pilot newspaper as a wireroom chief and a sports correspondent, following NSU sports. He was subsequently hired in 1968 as part-time Publicity Director for the Central Intercollegiate Athletics Association (CIAA). While serving in the military, in 1970 he enrolled and took courses in night school at NSU. Byrd left the Navy in 1978, but continued his education at NSU, graduating in 1980.

“Norfolk State University certainly contributed to my success by providing me a quality education,” Byrd said. “I was fortunate to get help from the GI Bill when I was in school,” he continued, by indicating that and his love of sports were driving forces for his desire to assist student-athletes. “I see the need to help young athletes so they can focus on their studies. If we get some additional alumni and friends helping like this, we can aid NSU in offering more program support and scholarships to our athletes.”

While he was spending time in the classroom, Byrd became a Spartan athletics fan. He and his wife, Rev. Dr. Helen Bessant Byrd, were regular attendees at NSU football and basketball games. They were inaugural members of the NSU Athletics Foundation (NSUAF) in 1980 when the organization was formed and Byrd later served on the NSUAF Board.

“We are avid fans,” said Byrd. “I remember games in Gill Gym where you had to get there by two or three in the afternoon if you wanted a seat for an evening game. We called Gill Gym the ‘the sardine can!’ it was such great atmosphere! People were everywhere, and many times the game had to be stopped to move fans back from the court.”

Dr. Byrd had been a professor in the NSU School of Education since 1968. The two met when she was a keynote speaker at a Dr. Martin Luther King event that Byrd coordinated when he was charged with directing the cultural programing for the Commandant Norfolk, Fifth Naval District. Dr. Byrd retired from NSU in 2004 and was awarded faculty emeritus. She then started a second career after spending three years at the Union Presbyterian Seminary in Richmond, Virginia. She graduated and was called to Pastor Covenant Presbyterian Church in Norfolk. She retired from pastoral ministry in 2016. She also has a named endowment at NSU, providing scholarship support to students in the School of Education.

It was Shedrick Byrd’s passion for Spartan athletics that led him to make a decision to start an endowment in his name for the athletics program. “I thought about doing it years ago when I was a member of the Chesapeake chapter of the NSU alumni association,” he explained. “I didn’t take the time to learn all about it. Now, I know that the endowment matures at $25,000, but you can start by giving a lower amount and add to it. I wanted to make a difference for the student-athletes that are studying and competing by taking some of the pressure off of them through providing additional financial resources.”

“I’m grateful for Shedrick’s leadership and his enthusiasm for the Norfolk State student-athletes,” said NSU athletics director Melody Webb. “Shedrick and Helen have been cheering for student athletes for decades. With this endowment gift, they have ensured that future Spartans will also benefit from their passion.”

Byrd is a member of Omega Psi Phi Fraternity, Inc. He is the author of the book, “The Mississippi Byrd, from Rural to Urban to Suburban and Beyond.” The book tells stories about his life and success while growing up in a racist and discriminatory society during the Jim Crow era. His latest project is a podcast, “The Byrd’s Nest,” that is scheduled to launch in March 2021 on YouTube and Instagram channels.

The endowment started by Byrd is one of the first individual endowments focused on an athletics cause. “I’m hoping this encourages others to start an endowment,” Byrd said. “If they are sports fans, why not? We can raise money to support student-athletes.”