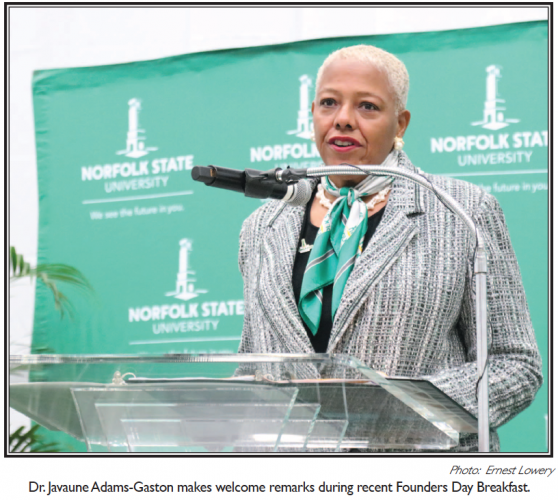 At NSU last week during the “1619: Making of America Summit,” historians examined the evolution of African-American social, political and economic life over the past 400 years.

This was another opportunity for the university’s new President, Dr. Javaune Adams-Gaston, to witness her faculty, staff and students demonstrate the HBCU’s (Historically Black College and University’s) mission and legacy to the local and national community.

Gaston said during an interview with the GUIDE, this revealed three important features about Virginia’s largest HBCU which she now leads

“I talked to one of our students who was involved in the summit, and she was so engaged and intelligent,” said Gaston. “The faculty is so successful; they love what they do and are so engaged with the students; and the ‘family-friendly’ environment which supports the school’s rich tradition illustrates that it is an important place to be.”

Gaston, a native of Washington, D.C., was hired as Norfolk State University’s seventh president earlier this year. She served a decade as the Senior Vice President for Student Life at Ohio State University. In that capacity, she oversaw the operations of over 30 departments at a school which has nearly 60,000 full and part-time students.

But she said both schools have some common features.

“It is just a matter of scale,” said Gaston. “Both have deep traditions. If you go out in the hinterlands of Ohio, you discover OSU is a part of the environment. The same for NSU…people love this institution and want it to thrive.”

“The big difference,” Gaston said, “are the resources. When you have resources, it much easier to get things off the ground.”

She said that HBCU schools struggle to acquire the necessary resources to provide the facilities and scholarships for their students which exist at other competing schools.

While Gaston said she arrived at a school which is in “good shape” financially, from her knowledge of endowments and fundraising, “I know we have to look at how to raise our endowments to provide opportunities for students to have a scholarship.”

Access and affordability are important, she said, to “make sure that individuals can get into the door. Support for scholarships is critical so that students can leave here with a degree in hand, ready to lead and free of heavy debt.”

On average, Gaston said, students leave college with a debt of $26,000-plus.

“We do not want any student to leave with $26,000 in debt,” she said. “A college education changes the trajectory of a student’s life. Students with a bachelor’s degree will make a million dollars … compared to a counterpart which does not.”

She continued, “We want students to have the opportunity to make money and to impact the culture here, the state and nation and across the world. Education is not just getting ready for a job…we want career readiness for all of our students.”

Professionally, Gaston, or “Dr. J,” as she is called, described the path of experience to university president as “unconventional.”

By age 26, she had acquired a doctorate in psychology, not education, from Iowa State University.

Before being hired at Ohio State, she worked at the University of Maryland (U of M) in a variety of administrative and faculty positions. She was the Executive Director of U of M’s Career Center and the President’s Promise, and Associate Dean of Undergraduate Studies.

Gaston also was Equity Administrator for the Division of Student Affairs, and she broke a glass ceiling at U of M to become the first African-American woman to serve as Assistant Director of Intercollegiate Athletics.

As a member of the graduate faculty, she taught courses in leadership and organizational change, and in counseling.

Gaston said her family has a tradition in education. Her mother, grandmother, and various aunts were teachers.

After her birth, in her mother’s arms for the first time, it was decided she would attend college – with a scholarship.

The same edict was imposed and achieved by her two female siblings.

Her mother was born in Portsmouth, Va., but migrated to Washington early in life. There she met Gaston’s father.

As a child, Gaston’s parents visited family in Portsmouth during the summers.

She recalls hearing about local sites such as Buckroe Beach in Hampton. She did not realize it was one of few southern beaches set aside for Blacks during the Jim Crow era.

Before accepting the position at NSU, Gaston said she knew of one aunt who had graduated from NSU. “NSU is very important to our family,” she said.

“I find out I have many relatives who graduated from NSU. The daughter of a cousin is a freshmen this fall.”

Gaston said while HBCUs face fiscal challenges she views them as opportunities to compete and secure more resources for the HBCU she leads and its students.

She said NSU and all HBCUs are steeped in tradition around their history and their role to the Black community.

Business, cybersecurity, theater arts (which now offers a degree), the music department, sciences, and the Spartan Legion band are among NSU’s program assets.

Gaston said despite all of the good events and programming NSU has to offer, she believes not enough is known about them off-campus.

She relishes the concept of “service-learning” and envisions university students and personnel engaging the community in an ongoing campaign of outreach and community partnerships to resolve this issue.

She believes this will translate into more community support of NSU programs, including athletics and will attract more students to NSU classrooms.

She has plans to invite 300 local high school students to the campus to find out about NSU’s music department offerings and other programs.

Currently 70% of the NSU student body is from Hampton Roads.

Gaston said while many colleges are investing in building up their science and cybersecurity education programs, the value of liberal arts is important, too.

Many of the students who leave NSU with a degree will work in at least nine career areas, according to a poll by Gallop, said Gaston.

She wants these graduates to be equipped academically in their chosen career fields and also skilled in the liberal arts areas of writing, speaking, working with culturally diverse teams and critical thinking which are increasingly important to the CEOs who will be interviewing them for their first jobs.

She cited increased internships as one important way to help nurture student interests in their fields. And, she wants to see an increase in the school’s existing international studies program.

Gaston is part of a rare leadership dynamic. She is the third female President at the same time the Rector of the NSU Board of Visitors is Joan Wilmer and the Vice-Rector is Dr. Deborah DiCroce.

Gaston said the troika is “lockstep” in providing the leadership to assure the success of all of the students.

Gaston says her leadership style is “servant-relational” where all personnel are part of the institutional team. Top administrators and the custodial workers have a shared role in providing the environment to nurture students

“I am a servant leader,” she said, with a mission to “improve, extend, and prepare students so they can be ready to go into the real world.”

Follow us
In this article:Hampton, HBCU, New President, NSU, Portsmouth