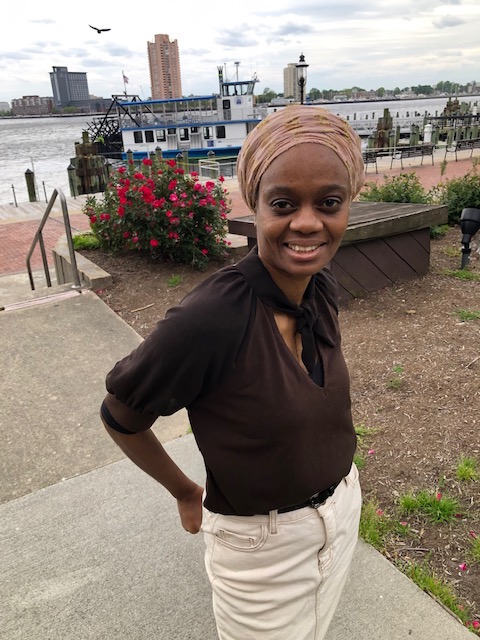 It was an early Tuesday morning, I had trouble sleeping so I leaned over and turned on the radio to listen to the Ed Joyner morning show. One of his guests was Nadine Fondaw, a poet and spoken word artist. There were several interesting things that stood out as I listened to the conversation/interview.

One is the fact that she is a native of the Congo Africa, speaks six languages, sings, is an educator and has an incredibly soft confident spoken voice. As I listened to every word, I found myself sitting on the edge of my bed. I knew I wanted an interview for the New Journal and Guide. “Melenda” is her family name which means “okra”, the vegetable, a fact she is extremely proud of. Melenda comes from a large family and every day her mother cooked for 25 people. Growing up everyone had a job to do… and naturally each sibling was always competing for favor of the parents.

In route to the continent of Turkey after receiving a scholarship from high school, (although she was favoring the medical field), Melenda was accepted as a computer engineer. She later married a military man and they soon were schedule-bound for El Paso Texas; that tour lasted four years.

Melenda has lived in a varity of countries around the world; the United States has been very satisfying to her and her family. One thing that stands out in her travels is the fact that each place has its own uniqueness and her goal is always to learn the language so she can express her thoughts in a structured manner. The one thing l learned from Melenda is she loves to talk and she wants to be understood… “speak softly they will listen.” Having a family with three girls, she taught them as they traveled to enjoy, who you are, where you are, be adventurous, appreciate the simple things around you and do not be afraid to ask questions. Make life an education.

At home, the Congo (Kinshasa), her father and mother and family spoke many languages. Her father encouraged the kids inside the household to speak French; outside the compound you spoke the universal language Swahili. By the time the kids started school, they had already reached the school requirement to learn French. The tribe in the next state of the Congo also spoke many languages in their compound. It is estimated between 1,200 and 2,100 languages are spoken in Africa.

It is true that in the Congo they live by the code that “it takes a village to raise a child”. Everyone has a say so about a child’s behavior as they navigate around their community. According to Melenda, this is one of the major differences between the Congo and America.

I know for myself, growing up in Chicago in the early fifties and sixties, parents in my neighborhood monitored in a snitch mentality towards all the kids. It was hard to get away with anything because all eyes were on you.

In Melenda’s compound, the Chief has control over the tribe’s laws, regulations and in-depth history. Your name, father’s and grandfather’s names are very important, stated Melenda. Your name is associated with land that belongs to your family. Unfortunately, some of the Chiefs in neighboring areas have lost their lives behind outside influence, and the discovery of gold in their midst has caused great confusion.

Sometime, we Americans (in general), forget how fortunate we are with the lifestyle we are afforded. To listen to someone from another country or continent boast about the land of opportunity here in America is somewhat puzzling and refreshing. However, for sure, where they come from the difference is night and day.

Melenda surely understands the difference. In fact, she has a five year strategy in place behind her talents to take advantage of what America has to offer. Her online store Vegan Rules is starting to percolate interest throughout the community as she continues to work on the growing pains for new start-ups. However, collard greens are her favorite American food. (Hmmmm, there’s something about that name, you know what I’m talking about.)

On a lighter side, Melenda shared, when asked, that French is the most romantic language. There are so many ways to talk about love and say I love you, that make you want to hug somebody.

And as far as rhythm and dance go, she says her native Congo is the best… um hmmm, smile. If you witnessed what I have seen, you would say the same thing, too. Well, I guess black folks got it like that around the world.

I’m still trying to wrap my head around the fact that Melenda speaks not five but six languages. They are English, French, Lingala, Spanish, Swahili and Turkey. I know she is moving in the right direction to achieve her goals.

Word for the day

Check it use it