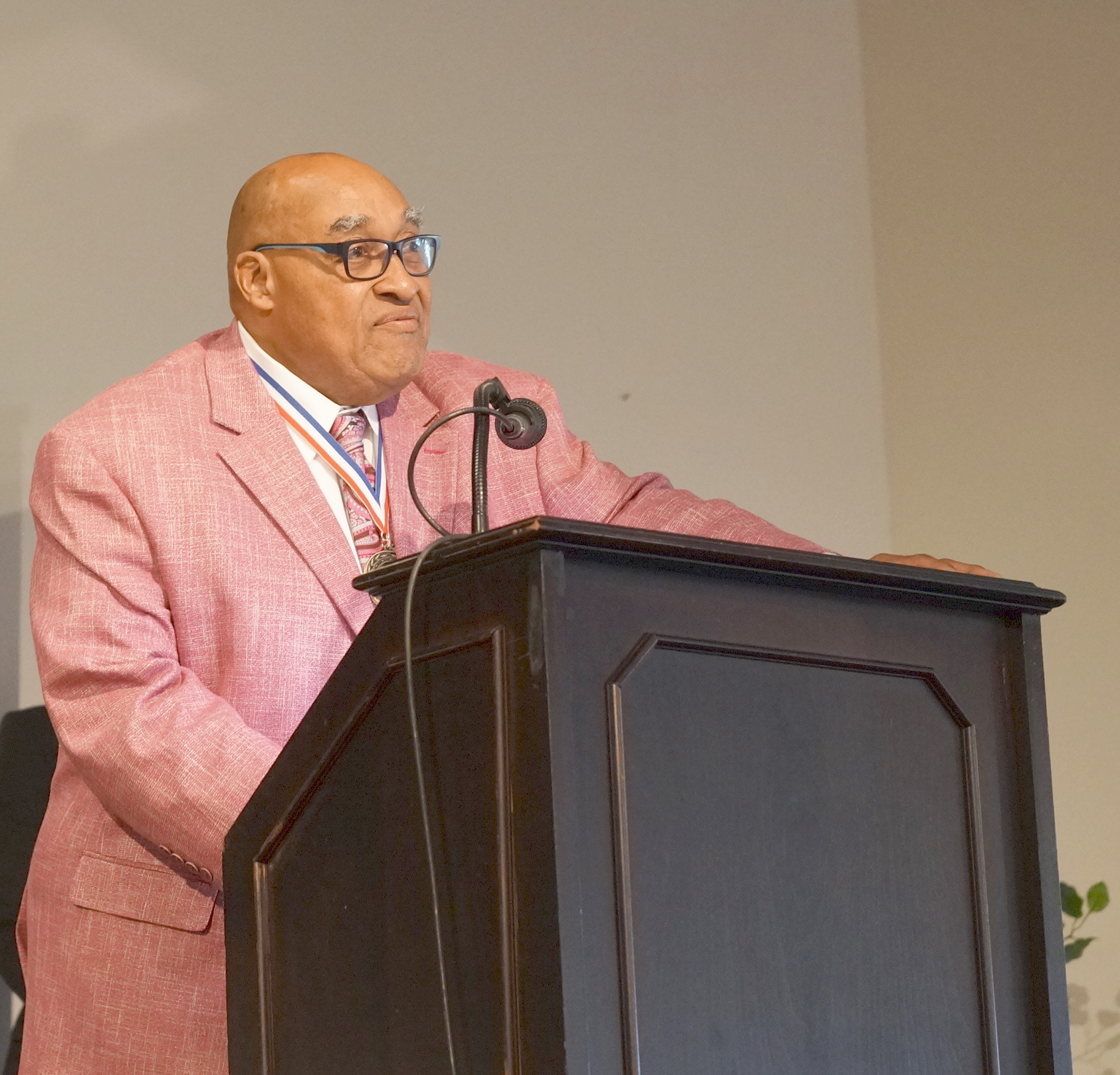 The church’s Senior Pastor Courtney McBath envisioned a new and bigger second home for his church which had a membership of 2,400 and growing.

But most of the congregants were Black, and Azalea Gardens was mostly White and located in Ward 5, represented by Councilman Randy Wright.

His colleague, Councilman Paul Riddick recalls that Wright organized opposition to the church’s plans and organized the residents of Azalea Gardens and other mostly White neighborhoods against it.

“Most people usually like attending church where they live,” said Riddick, who is retiring from Norfolk City Council after 30 years. “If Calvary had built the sanctuary, this would have changed the racial and political dynamic of the whole area and that was a political threat.”

Riddick said there was a segment of Black civic and political leadership who were upset about the opposition, dredging up Norfolk’s racial history of opposing desegregation and Black advancement.

When the church’s plans were initially proposed, the council voted 6-1 to approve them; however, Riddick recalls the pressure from the White civic leagues forced all of the colleagues except him to reverse their vote.

Riddick was one of three Black people on council at the time. Dr. John Foster and Father Joe Green were two clergymen on council whom Riddick called “conservative” and quiet on most issues which underlined the city’s racial history.

At the time, the presence of three Blacks on council was deemed progress. Riddick, the first non-incumbent elected in 1992 under the city’s new ward system, called out the disparities in the funding for Black neighborhoods. He also cited Black people being shut out of large funding contracts for development, lack of Black police or fire personnel and mistreatment of Blacks by the police.

All of this within a year after he was elected to council.

While many Black civic leaders and the New Journal and Guide supported his positions, Riddick said the media led by the Virginian-Pilot newspaper was exploiting the racial issue at that time for political gain.

There was an effort to oust him in 1994 when four candidates challenged the freshmen councilman.

Several of those opponents received donations from what Riddick called the “shadow government,” representing interests of the city’s westside establishment.

There was anger at Riddick’s blunt criticism of the city’s hiring, procurement, funding and educational policies toward Black residents.

Despite the criticism and making Black and White civic leaders uncomfortable, Riddick has had only one political set-back: a bid for mayor in 2000.

“Paul told the truth. It was not a strategy to build political support and stay in office,” said an individual who did not want to be named for this article.

This individual claims not to be a Riddick fan but says over the years has developed a high level for respect for the councilman.

“They tried to take him out in 1994 because he was a threat to the status quo,” the anonymous person said. “Until he was elected, except for Joe Jordan, no other Black person who was critical of the status quo was elected. Even people who publicly disliked Paul’s honesty respected him. His consistency was why poor Black and White people liked him.”

“The big and troubling question is who will replace him. The election to replace him will be the most important one in a generation. And Black people need to be careful about who does.”

The individual who is an elected political figure said the most critical issue currently is Black economic empowerment, or the lack of it, considering the millions of dollars being spent on continued redevelopment of sections of Norfolk.

“White business and development interests get to choose the ingredients and how the cake of economic prosperity is cooked,” the anonymous political figure said. “Riddick has been the only elected Black official to say Black folk have been deliberately left out of the kitchen when it was cooked.”

“They never wanted the Joe Jordans, and the Evelyn Butts, or the Levi Willises or even the Kenny Alexanders to be in a position to have a voice,” said the anonymous individual who has lived in Norfolk most of their life.

Riddick was born in Norfolk and lived a good portion of his life in Young Park. It, Tidewater Gardens and Calvert Square replaced shanties where poor and Black residents called home near the city’s downtown.

Riddick and his mother lived in the community when it was not deemed a dangerous red brick enclave of crime and social dysfunction.

“Those public housing communities have changed because the policy of not investing in, and respecting the rights of Black people has not changed,” said Riddick. “They were strong communities and affordable clean places for Black people, including my mother and me to live.”

“I recall Joe Jordan, who was a mentor, Levi Willis or Mrs. (Evelyn) Butts or Joe Rose, William P. Robinson, Sr. and others who were outspoken Black leaders.”

“They did not accept no for an answer,” said Riddick. “They inspired me. I had big shoes to fill… and be the voice for folks who did not have one. Most of them had no degree but many did. If I had not, I felt I would be a failure.”

Riddick’s Ward 4 is a huge piece of political real estate.

It runs from the front entrance of Harbor Park Baseball Stadium, southward to Berkley and Campostella, all of St. Paul’s Quadrant, Grandy Village, Ingleside, Poplar Halls, and the western part of the airport complex near Azalea Gardens.

Like other council representatives, providing for the city’s needs overall is top priority. But advocating for investment and support of their respective wards is key as well.

Working with other members on council and city planners Riddick’s power base, the Berkley area, has a new grocery store after several years as a food desert, a state-of-the-art library and aquatic center, and a new school.

But residents today claim the new city budget leaves Berkley and other Southside communities out the mix.

Riddick’s supporters and foes acknowledge the large and small items on his list of accomplishments. For example, his support for Hampton Roads Transit (HRT), the area’s mass transit system. HRT installed the frequently used racks on its buses which carry bikes for bus riders at Riddick’s suggestion, after he saw buses with racks deployed in Chicago.

He proposed converting a rarely used office building on Church Street named for Vivian Carter Mason into the headquarters for Teens With a Purpose (TWP), a youth support and advocacy program.

Riddick has been keen about badgering the city manager and development officials on devoting efforts to provide affordable housing or building new homes in the old neighborhoods of Huntersville, Lindenwood, and Barraud Park that have been historically ignored.

He also has supported more investment in Booker T. Washington High School, his alma mater and one of the remaining high schools which served Black residents prior to desegregation, though he does not represent that ward. He also supported Lake Taylor High’s athletic facilities which were upgraded including the addition of a new football stadium.

Riddick opposed the continued closing of the city’s recreation centers and other community centers, notably in the Black sections of town, as a result of the COVID period.

Closures after the COVID panic faded, he said, have led to gun violence in the city due in part to a lack of “investment in young people in the poorest sections of the city.”

Educating About Neighbors (CLEAN), a youth mentoring group. “He was not able to get Berkley and the Southside all we wanted, but he has been a strong supporter. The voice that spoke up for the poor all over the city will be missed.”

Her name is Catherine, and she works at NSU as a janitor, 45, with three children living in Calvert Square public housing community.

“Black and white people did not like Mr. Riddick for what he said…or did not say.,” she said. “But nobody spoke up for folks like me. He was poor. All the development in the city is not for us and he had told them. ”

Dr. La Francis Rogers-Rose is the founder of the International Black Women’s Conference (IBWC), a healthcare and social advocacy agency located in Huntersville.

“I never knew him personally,” she said. “But he was the only person I could call, and he answered the phone, when I needed information or help. He is a unique public servant and consistent about economic and social disparities facing Black people.”

Earl Fraley is a real estate agent and longtime friend who once chaired the city’s powerful Planning Commission.

“Paul was the Clarion Call,” said Fraley. “He spoke truth to power and a lot of people did not like that, including Black leaders”

“The city of Norfolk has been around since Moby Dick was a minnow,” he said. “Paul came from a background where he got a personal education on Norfolk being bathed in racism. He let people know they were being short changed. That is his legacy and calling card. He inherited responsibility and people loved or hated him for it.”

Representing the House of Delegates in the 90th District now, Angelia Williams Graves served with Riddick on council for 10 years, and was Vice Mayor.

“He was an incredible voice,” she said. “He was a consistent voice for the underprivileged who did not have one and that will be Paul’s legacy. We had our differences. People don’t recognize it, but he has been the catalyst for change in this city.”