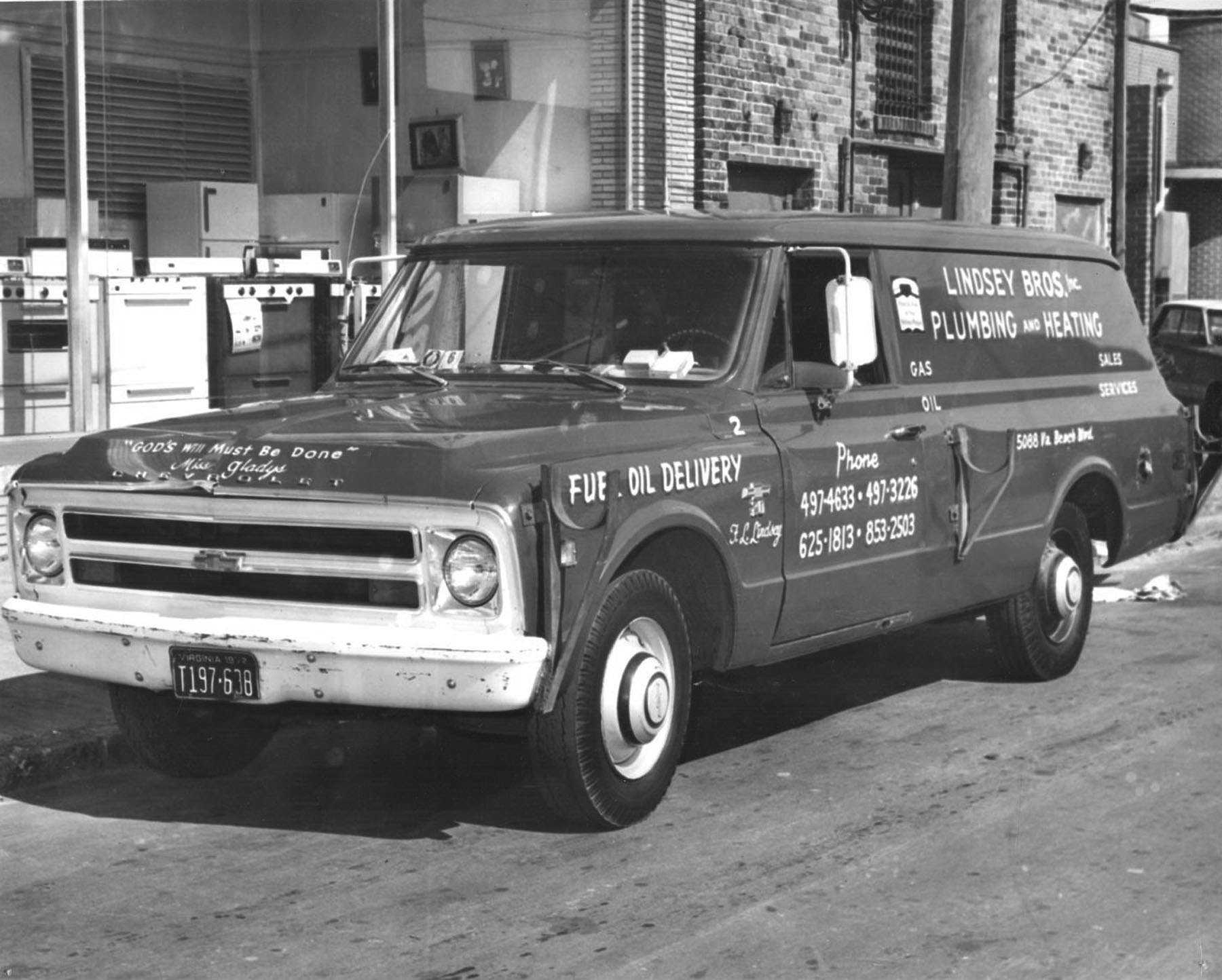 Small family-owned business have been the backbone of the African-American community’s economic legacy. On September 6, the Lindsey Brothers Plumbing and Heating Company, Inc. will observe 50 years of operation. On November 26, at the Edmonds Center in Portsmouth, the Lindsey clan will invite the community it serves to a gala celebrating that half century of service.

The company’s black service trucks are frequently seen on the streets of the area, with the distinctive wording “Jesus Never Fails” embossed on their sides, signifying the family’s regard for Christian-based traditions of hard work and helping others. At least three generations of the family are involved in the company’s daily operations.

Three of the original founders of the company’s management team – James E. Lindsey, Sr., the family and business elder; Mrs. Cora L. Taylor, his youngest sister; and Mr. Connie L. Lindsey, Sr., a younger brother – are still alive and involved as board members of the firm

James Lindsay, Sr. is 86 now, and calls himself a “helper” to his son, Larry, who runs the shop day to day. The elder Lindsey works supervising and planning plumbing projects in between naps and preparing for Sunday School classes. A member of the newer generation, great granddaughter Takeesha works in the front office. Family historian and chair of the board Jacquelyn Lindsey Wynn, lives in Maryland now and spent time with IBM. She has six siblings, including Delegate Joseph Lindsey, a noted Hampton Roads attorney, who also is a member of the Virginia House of Delegates.

The Lindsey clan has humble origins, according to James Lindsey, Sr., who said he and his four brothers formed the foundation of the company. They were raised to embrace self-determination by Mr. James and Mrs. Jenny Lindsey on the family farm in old Princess Anne County (now Virginia Beach). Mr. Lindsey, Sr., said the family farm house did not even have indoor plumbing.

Jacqueline Wynn recalls her father told her that there were so many missing floor boards, he could see chickens moving about under it. Lindsey, Sr. tells the story of his family living off the land, as did most rural Blacks in Virginia during the 30s and 40s. He and his siblings were always tinkering with the farm equipment. At age 11, he recalls that although his feet could not reach the pedals of the tractor, he could drive the contraption, and he taught the farmhands how to drive and maintain it.

The Lindsey Brothers Plumbing and Heating Company had its genesis at the end of a bus ride from the rural Princess Anne County to nearby Norfolk by 16-year-old James Lindsey, Sr.
“I was not off the bus five minutes and this White man asked me if I needed a job, and said I said yes,“ Lindsey recalled. “Mr. T. H. Webb, Sr. hired me as a plumber’s helper. I walked to his place on Duke Street from my uncle’s home on Fourth Street.

“I attended night classes at Booker T. Washington High School to get training in plumbing,” he continued. At Booker T. Washington, E.W. Carter was a teacher who taught the craft, and L.L. Hughes worked in the field. Hughes taught classes as well. These two men would play vital roles in Lindsey’s evolution. James Lindsey, Sr. got his certificate in plumbing from Booker T. at age 18. He was still working for T.H. Webb, Sr., but he then landed a job with T.H. Webb, Jr.

At about the same time, his brother Freddie L. Lindsey, was hired by his old boss’ brother, Jack Webb, to pursue a career in plumbing. Although he had more experience and knew the city better, James Lindsey, Sr. discovered that his new boss was paying a newly hired White man more. Unable to resolve the situation, he acquired a job with E.W. Carter, who was his BTW plumbing teacher.

Later that year, he got a job with Hughes, before landing a job as a plumber and steam pipe fitter at the Hampton Roads Army Base which now is the Norfolk Port facility. “If you had dark skin like me, it was hard for you to get a plumbing license in Virginia, especially in Norfolk,” he recalled. “There were no licensed Black plumbers in this city, (in the early 1950s). and they did not want to help you get one. You would take the test, but you could not pass it.”

Even Carter and Hughes, who were excellent at their craft, were barred from securing Master Plumber certifications. In 1953, he was inducted in the U.S. Army and spent two years in Korea as the conflict was winding down. When he returned home, he regained his job at the Army base. Lindsey later secured a job at Langley Air Force base. He would earn a “Class A” License in Richmond which qualified him for work in any locale regardless of the effort to deter Blacks from acquiring licenses.

“I also got my state license but when I applied for jobs, they would say I was not on the books,” he recalled. “But they would look again, and there I was. Young people do not understand how they tried to keep us out of plumbing in the state. Times have changed.” By 1965, James Lindsey, Sr. and his brothers, Freddie, Connie, Jimmy and William, had established themselves as reputable plumbers and built the foundation of Lindsey Brothers Plumbing and Heating Company.

“We worked all over the area anyway, so why not start our own business,” said Lindsey. “My brothers and I always had better hands than education. We knew the plumbing business inside out and we wanted to use our skills to help our family and community.” Lindsey would work at the Langley Air Force base until 1970 and by then had acquired the all-important Master Plumbing Designation that such businesses needed for state certification and bonding.

Over time, the men expanded into heating oil distributions and ran three Mobile Service and Auto Stations. They were at what was called “Chinese Corner” at Witchduck and Virginia Beach Blvd.; Church and 18th Street in Norfolk; and Newtown Road. Instead of an HRT bus, Jacquelyn Lindsey Wynn recalls leaving Booker T. Washington High School, and catching a Trailways bus to Witchduck Road to work at the family station.

“I can never recall not having a job when I was a kid,” she said. “Me and my siblings worked year-round as grease monkeys, pumped gas, changing oil and other jobs. I managed the station, ordering the gas and supplies. Every family member I knew worked at one of those stations. It was a family-run business.” James Lindsey, Sr. said the company had to abandon its oil distribution business because of its lack of profitability.

Today, they continue their long-standing service agreements with the Norfolk Public School Division, HRT and NSU. The Lindseys still believe in sharing their good fortune to sustain family and others. Hundreds of men and women have been employed in various roles and received the skills needed to move on to start their own businesses or work elsewhere. Charity is a part of the family legacy as they supply funding for youth groups, educational efforts and other causes to help those in need.

“I read the Bible a bit,” said Lindsey, “and it says that if you do well in life, share it with others. “We laid a good foundation a long time ago,” he said. “There will always be a need for our services. There will be one million homes built and somebody has to put in the plumbing and maintain it. So there will always be a well-paying job for some young man or woman. “Not everyone needs to walk around with a briefcase. But you can also provide the means for those who aspire to do so.”