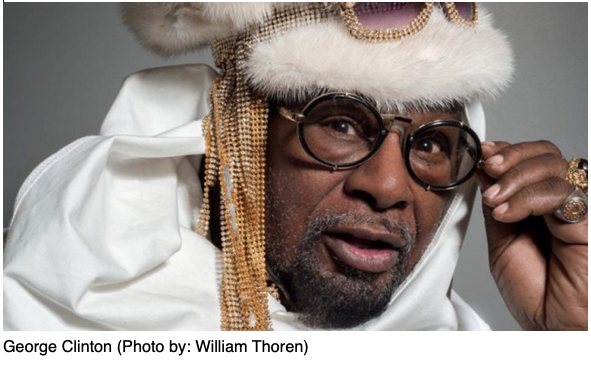 We know him and love him as the Godfather of Funk. But George Clinton is so much more.

After singing doo-wop on street corners in his hometown of Plainfield, New Jersey, as a teenager, Clinton was just a young musician when he opened a barbershop and began to style hair.

“We did the great finger waves of the ‘50s. To be a singer during that era, you had to have your hair done,” Clinton recalls. “And so the barbershop became the R&B star of the neighborhood. It also gave me a place to rehearse my own kind of music.”

And rehearse he did, for when he was not styling hair, Clinton was making music and forming Parliament-Funkadelic — or P-Funk — a collection of rotating musicians made up of two individual bands, Parliament and Funkadelic. Their distinctive funk style drew on psychedelic culture, outlandish fashion, science fiction, and surreal humor.

Influenced by the likes of late 1960s artists such as Jimi Hendrix, Sly Stone and Frank Zappa, Clinton later moved to Detroit and developed a relationship with Motown where he became a songwriter and producer.

“To me, being there was like being with one big, happy family,” says Clinton. “There was Smokey Robinson and Berry Gordy, and production teams like Ashford and Simpson, and so many more. And they all left a lasting impression on me.”

But Clinton never had any doubts that he and funk were in it for the long haul.

“I always felt like we were gonna kill with our music. Everybody wants to have fun and that’s what funk is all about,” he says.

And the business has recognized what Clinton is all about many, many times. Over the years he’s received a Grammy, a Dove (gospel), and an MTV music award. He’s also been recognized by BMI, the NAACP Image award, and Motown Alumni Association for Lifetime Achievement. Clinton’s Parliament/Funkadelic was inducted into the Rock and Roll Hall of Fame in 1997.

“So as of now I have no immediate plans to retire. Maybe next year I’ll be ready to take it easy. But I still enjoy what I do,” he says.

This article originally appeared in The Philadelphia Tribune.

Follow us
In this article:Funk, George Clinton, Music Month