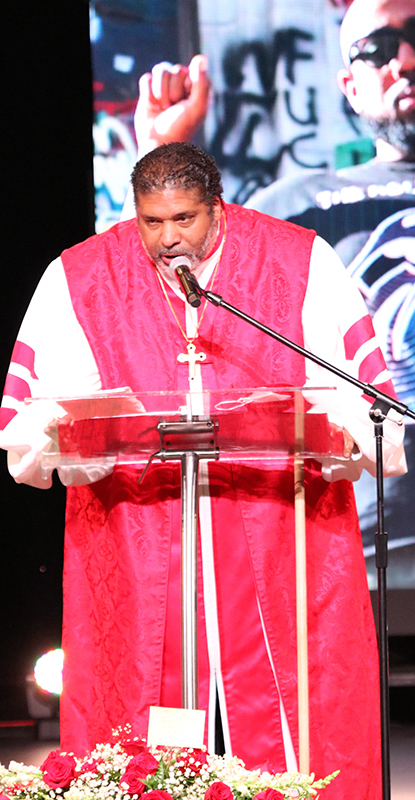 A socially distanced assembly of family members, friends, community persons, and elected officials from throughout Hampton Roads gathered to memorialize the life of Donovon Wayne Lynch on Easter Monday at the Wave Church in Virginia Beach.

The 25-year-old Lynch died at the Oceanfront in the early hours of Saturday March 27 after being shot by a Virginia Beach police officer during a Friday night of violence involving at least three separate incidents. The investigation into his death is ongoing and is being conducted by the Virginia State Police.

Lynch was shot by a police officer after he allegedly brandished a weapon during the chaos, according to a police report. People who knew him say Lynch’s personality has been misrepresented.

Pastor Eric Majette, who was among the first to bring remarks during the service, remembered Lynch as being “humble, sweet, and a man who loved to laugh”. Majette, who serves at the New Life Church Global, said Lynch was “like a brother”.

Others offering reflections mirrored the description of Donovon Lynch as a man who was industrious, kind, generous, and committed to carrying forth his Christian values. His uncle, Min. Tim Lynch of Dallas, said he talked with his nephew only a few weeks ago and was encouraged by Lynch’s positive and upbeat attitude about his bright future.

Donovon Lynch had started and operated three businesses at the time of his death. One, a security company, enabled him to carry a licensed weapon.

Donovon Lynch grew up in Virginia Beach where he

thrived as a student-athlete. He was born on April 17, 1993 to Wayne and the late Marva Lynch. He received his Bachelor’s degree in Sports Management from the University of Virginia at Wise.

NFL Hall of Famer Bruce Smith, in giving reflections, said Lynch’s untimely death in such a tragic manner was a “terror that lives within us,” as he spoke about his own fears as the father of a Black child. “My worst fear is that they will leave the house never to return.” It was a statement that drew a response from the crowd, as he called for “truth, transparency, and justice.”

Lynch’s cousin, Pharrell Williams, acclaimed Grammy-winning producer, songwriter, and headliner behind a high number of R&B, rap, and pop hits, spoke to the symbolism of Lynch’s memorial service taking place on Easter Monday. The date was also Williams’ birthday, he noted. He called for the “spirit of Virginia Beach” to “get up” from the tragedy, and “to talk”.

“You need to talk about the issues, the struggles, the misinformation,” he said. Williams said a week passed before the city’s mayor Bobby Dyer reached out in sympathy to the Lynch Family.

“We must do better, Virginia Beach; we can do better,” Williams said.

Williams proposed that the city would sponsor a forum to work on its issues on three fronts: “who we were; who we are; and who we’d like to be”.

Bishop William J. Barber III of North Carolina, nationally known as a civil rights and political activist was the Eulogist. Barber is co-chair of the Poor People’s Campaign: A National Call for Moral Revival.

“We can’t ignore his death,” said Barber. “Too many will say ‘God called him home.’ We will not make God our enemy. We can’t put this on God.”

“We must not let his memory die. We will not let anybody destroy or tear down his memory. We will no longer just bury our sons.”

Barber issued a mandate to the men in the assembly to accept the challenge of bring about a changed society.

“Be the resurrection,” he implored them, as he had them stand to their feet. He ended with the message, “Sleep well, Donovon.”

“Donovon’s living is not in vain,” said Williams. “Donovon’s passing will serve a purpose.”

After the memorial service, Donovon Lynch was buried at Princess Anne Memorial Park.