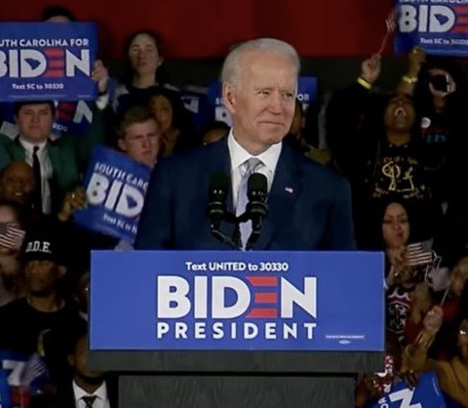 TriceEdneyWire.com
Former Vice President Joe Biden has the most delegates going into this summer’s Democratic Convention and is the presumptive nominee for president. But there is no consensus about whether Biden will be able to beat President Donald Trump in November.

Political analyst Dr. Avis Jones-Deweever said she’s been tracking polls, talking to colleagues and other people she knows and trying to read the tea leaves. Even though Biden is ahead in all the polls she’s seen, she said she’s still uneasy.

“Coronavirus is helping him because Trump is hurting himself a lot with ridiculous behavior,” said Jones-DeWeever, a highly-sought after women’s empowerment strategist, diversity counselor, author and political commentator. “People are seeing the devastation of that, the lies, incompetence, stupidity. All of that has to count.”

“Biden is leading in every poll. He’s run every single poll.”

Currently, Trump’s base is not enough to win or capture key states. What’s of vital importance is turnout, especially in the key states that Hillary Clinton lost in 2016 including Pennsylvania, Michigan and Wisconsin.

“This is a very winnable election, not necessary a cakewalk,” De-Weever cautioned.

“It’s 20 pages long which suggests that he is doing more to address our problems,” she said. “It’s been hard for him to get media attention because of coronavirus. I’m very concerned because they’re not using social media to its capacity. They need talented staff to develop digital content because so far, it’s underwhelming.”

Jones-DeWeever said she is stunned that former Democratic presidential candidate billionaire Mike Bloomberg offered his digital staff to the Biden campaign and Biden lieutenants have not accepted it.

“I was like, ‘Jesus Christ, please.’ They’re so arrogant to ignore this offer. It’s making me very concerned. It’s making me feel like the Hillary Clinton campaign all over again.”

Despite positive polls for him, there are some who have sworn against Biden for what they deem to be principled reasons.

Leo Alexander, a Mobile, Alabama businessman, said he thinks Biden is a poor choice for the Democratic nominee and doesn’t deserve to be vying for president because he has never had the interests of Black people during his entire political career.

“In the early ‘70s, he was against busing, then he cozied up to segregation side of the Senate, he aggressively attacked Anita Hill in the ‘80s, and then he was instrumental in the Crime bill which many Black men still haven’t recovered from,” said Alexander. “He is not a friend of the Black man. The only reason why he’s relevant is because President Obama chose him as his vice president. He ran three times and was a complete loser.”

For the past several weeks, Alexander has been very vocal about his support for New York Gov. Andrew Cuomo who he said has proven to be the most competent politician on the national scene and he said he’s looking forward to Cuomo being pushed forward as the Democratic nominee this summer. Cuomo’s response to the Covid19 outbreak that has decimated New York has been masterful, Alexander said.

“Biden doesn’t have enough delegates to claim victory,” he explained. “Bernie (Sanders) kept his delegates which was a smooth move because that opened the door to a brokered convention. And it opens the door for a backdoor candidate to step in.”

“I think Cuomo would take it. Some people are chosen like Cuomo. Coronavirus has done the same thing for Cuomo. He’s saying the right thing, that he doesn’t want post. He’s keeping his mouth shut and doing a helluva job.”

Alexander said Cuomo is perfect is that he’s progressive but comes from the Establishment wing of the party.

“Cuomo will bring the party together. It’s gonna be a beautiful thing. Must see TV,” Alexander said with a hearty laugh.

The novel virus pandemic has hit America hard with this country exhibiting the highest number of cases in the world. On Tuesday morning, there were 1,218,472 confirmed cases in the US with more than 70,000 people succumbing to the disease.

For well over a month, about 80 percent of the country has been under locked down or under mandatory stay-at-home orders. More than 26 million people have applied for unemployment, an estimated 40 million Americans have lost their jobs and businesses are either closed for the foreseeable future or in danger of being shuttered permanently.

Uncertainty still persists about how the disease is spread, who is infected and who is asymptomatic. Testing is haphazard and sporadic and the contact tracing and surveillance needed to track and contain the disease has been absent because of the lack of coordination from the federal government, critics say.

“I think he’ll win. I have to believe that. Yeah, I think he will win,” she said with a chuckle. “They’ll put up a good fight. We’ll see some trickery, the Russians may be involved again, but Biden will win.”

Halstead, a businesswoman who transports students to and from school, said Biden’s very affectionate nature has caused him problems but attributes that to a generational thing.

“I don’t think it’s a big thing and doesn’t compare to the predatory actions of Trump and Bill Clinton,” she said. “What’s very important too is that the virus has really brought all these ills to the surface. The healthcare system and the country’s medical infrastructure is inadequate and is being strained to the breaking point. Republicans have shown that they really don’t care. They don’t want to talk about healthcare. If we had universal healthcare, it would have driven the need for masks and people going to the doctor.”

Halstead said she is looking forward to a Democratic president and Democratically-controlled government that cares more about people than property.

When asked if Biden will win, Michele Watley, a strategic communications and political advocacy consultant, said, “You never know …”

“He’s spun a good narrative, taken coronavirus and framed it as war, has pinpointed a source and made it political,” she said of President Trump. “He’s blamed Democrats, said they won’t open businesses.”

“The economy was a major anchor that was keeping the administration afloat and now Covid19 has tossed it awry,” said Watley, who served as director of African-American Outreach during the 2016 campaign. “It will be interesting to see after coronavirus what the process is in terms of going to work, who voters blame for difficulties that arise and the businesses that had to close.”

When asked about if Biden should pick a Black woman as vice president, Watley mulled the question.

“Who he chooses will affect his race. How? I’m not sure,” she said. “This is where it becomes problem in the campaign sense. Rep. James Clyburn has said Biden doesn’t have to choose a Black woman. He is taken as the voice of all Black people but he doesn’t speak for me…When people vote, you vote for a payoff and support candidates who vote your interests. Do you ask Black women to wait again? Where is the payoff?”