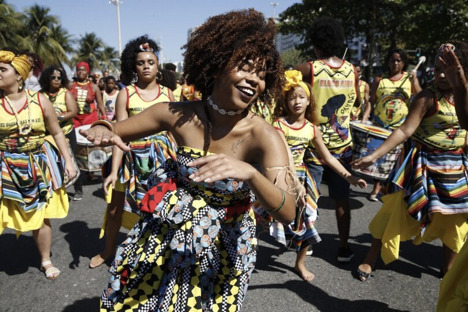 The Brazilian state of Bahia kicked off Black Consciousness Month with a promise of educating the community about the trials, tribulations, and accomplishments of Black people throughout South and Latin America.

During November, many in the northeastern state have vowed to recognize Black history and cultural awareness ahead of the nationwide observance of Black Consciousness Day on November 20.

“Mês da Consciência Negra [Brazil’s Black History Month] is related to the commemoration of the death of Zumbi of Palmares on November 20, 1695, a holiday in many Brazilian cities,” tweeted historian and Howard University Professor Dr. Ana Lucia Araujo.

Born free in 1655, Zumbi dos Palmares counted among the last military leaders of the Quilombo – or warrior village.

According to historians, the Quilombo dos Palmares was a free society, an old South American republic, which included the present-day Brazilian coastal state of Alagoas, Brazil.

“Today, Zumbi is known as one of the great historical leaders of Brazil,” the historians wrote.

“At approximately six years old, the Portuguese captured Zumbi from the Palmares region and he was given as a slave to a Portuguese priest, António Melo.

Baptized Francisco, Zumbi was taught Latin, the Portuguese religion and language, and served the Catholic mass.

In 1670, at 15 years old, Zumbi escaped and returned to his birthplace. He soon became known as a Capoërae/Capoiera master in the roda (wheel or circle) of Palmares’ practitioners of this African martial art.

By his early twenties, he became a respected military strategist.”

Zumbi eluded the Portuguese and continued the Quilombo resistance.

It’s believed that someone betrayed Zumbi, which led to the Portuguese destroying the Palmares compound. Zumbi was captured and killed on November 20, 1695.

Brazil’s Black community’s progress includes a nearly two-decade-old law that requires the teaching of Afro-Brazilian history and culture in schools.

According to the Middlebury Institute Network, with Brazil’s academic reputation and its growing racial divide, many policymakers believe that the law, known as “The Status Quota Law,” is the only way out.

Gisele Alves, a Brazilian native with African ancestry who lives in a poor neighborhood on the outskirts of Rio de Janerio, told the Middlebury Institute Network that she probably would not have gone to college without help from the state.

“I thought I was going to finish school, find work in a little shop, get married and pregnant, and that would be it,” she stated.

Because of the law, Gisele received acceptance to the State University of Rio de Janeiro.

“Many students like Gisele will also get accepted thanks to this new law,” officials wrote.

“Even though [the law] will be discontinued in 10 years, this law is the next step for Brazil in guaranteeing equal access to education and a better future for all Brazilians.”