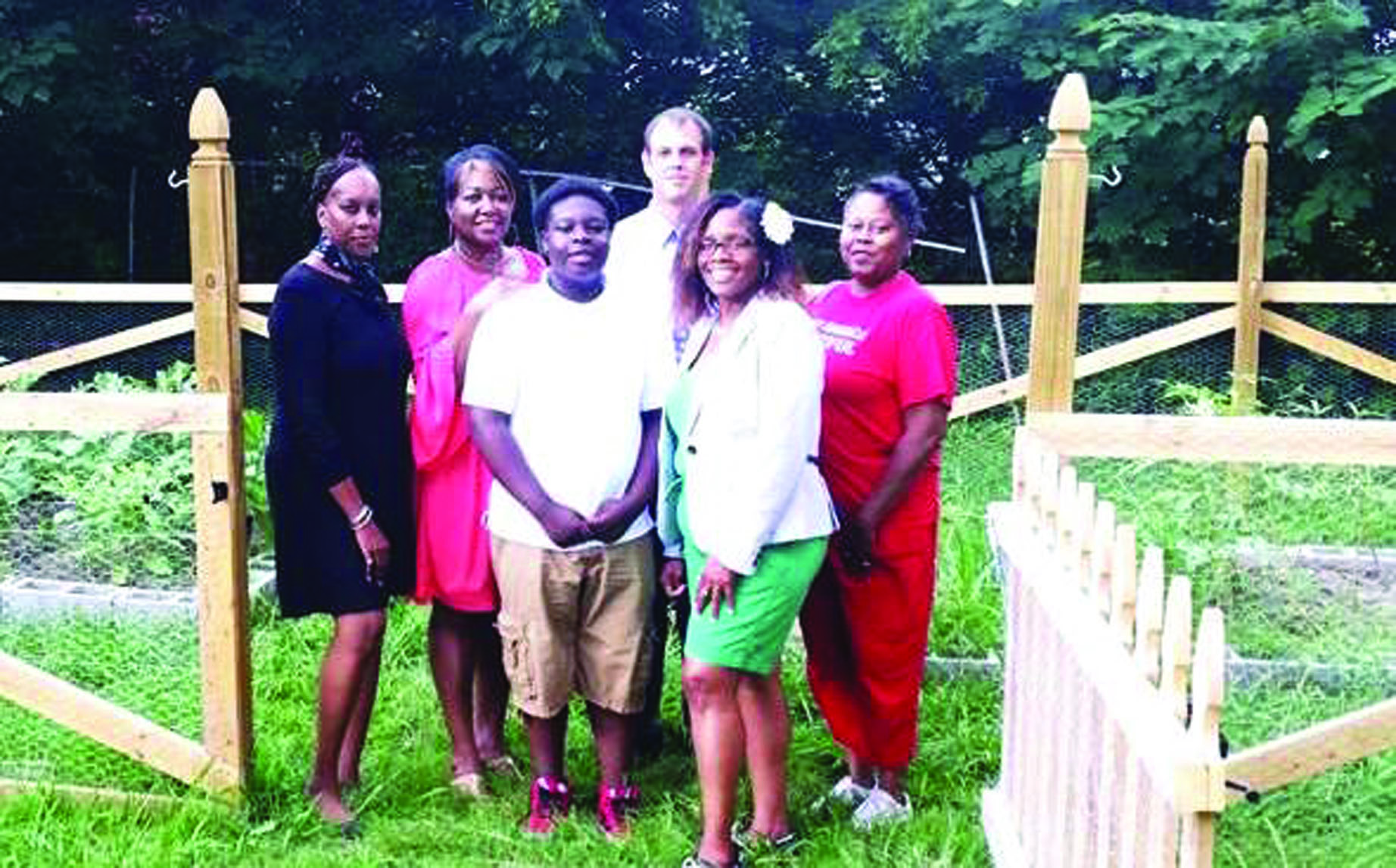 When asked what type fruit or vegetable he would be, 14-year-old Montique Jones says, “I would be an onion, because when you smell it, it’s sour, but when you cook it, it’s sweet.” Montique is one of a number of ambassadors from the Youth Earn and Learn Jobs for Kids program, which has planted and continues to nurture a garden at Norfolk’s Stanhope House, a transitional housing facility for women that provides peer support groups, workshops, seminars and case management services.

But it is much more than that and has provided a site for Montique and several of his peers to literally lay the groundwork for something, then watch it grow. “It’s amazing how plants can grow. I think I’ve achieved something,” he says. Recently, I had the occasion to share an exotic cantaloupe tea at Stanhope House, with a group of community partners who envisioned creating a community garden there and have watched it come to fruition. The tasty, novel tea was the creation of Takaela Langston, popularly known as “Chef T” and a graduate of the Tidewater Community College culinary program. She has emerged as a central force in this dynamic, nutrition-based initiative.

I was joined by Cheryl Sumner, president of the Chesterfield Heights Civic League and the operations manager, Stanhope House; Karen Bailey, founder, Youth Earn and Learn Jobs for Kids, a workforce training, job development program for youth 12 and up; and Bettye Williams Potts, who represents the five civic leagues of Campostella Heights, Campostella, Berkley, Oakleaf and Diggs Town and sits on the boards of the Southside Coalition, the Southside Taskforce and the Southside Education Committee.

We were also joined by Norm Grefe, environmental health manager, Norfolk Department of Public Health and Laverne Williams, a Norfolk Public Health educator and the chief coordinator of the Stanhope House community garden. It was Williams who tilled the soil for the idea of a community garden. The Health Department was very interested in launching such a project. “We wanted to make a change in the Norfolk Community,” she said, “because we knew that there was an issue with food deserts.” Her research led her to Bailey, who proved the ideal resource.
Of her organization Youth Earn and Learn Jobs for Kids, Bailey said, “We keep kids off the streets and we raise our next generation of CEOs and entrepreneurs.” What better organization to find the youth to plant, nurture and grow a verdant garden of fruits and vegetables?

Bailey said, “The conversation stemmed from the work Laverne started with the Southside Aquatics Center’s 50-Plus Splash Club.” Potts added, “The Stanhope community garden is an expansion of 50-Plus Splash, a health and awareness program. It has a lot to do with healthy eating and Laverne had Master Gardeners, from the Virginia Cooperative Extension, come in to do several presentations. The participants really enjoyed getting the information on how to use fresh produce and herbs instead of seasoning their food with high salt content products. So it grew from that idea, not to just have it in the homes, but to have it available for community use.”

The seeds were planted for something quite wonderful and bountiful. Sumner noted, “The whole wellness aspect fits into my vision for the Stanhope House with health, the exercise classes, and the fitness room. The garden was just an extension of how we can help ourselves. It was a great way to expand the whole holistic approach.” Yet, the early organizers knew that they needed a plan. What emerged was a four-phase project.

Williams said, “The first phase was the initial meeting to get all of the stakeholders at the table.” After they decided to give the project the green light, “Then Karen did a wonderful thing,” Williams added, “by getting some volunteers to go back to the yard to clean out all of the shrubs and trees.” Bailey noted, “The volunteers were Americorps Vista. Keep Norfolk Beautiful was able to connect us with Americorps Vista and they sent out a team of eight people to do the work.”

Then came Phase II. “Once we had the area clean with the removal of the shrubs and the trees,” Williams said, “then we had the volunteers place the seeder blocks, which were donated by Betty Potts, for the raised beds and gardens.” The City of Norfolk provided the topsoil needed for Phase III, but with clear instructions that the garden needed to be composted. The determined group themselves personally collected and donated the funds for the compost. As the community garden began to take shape, the group knew that they would also need some fencing, another component of Phase III. That’s when another unexpected, yet wholly committed volunteer came onboard.

“Even though we realized we needed a fence of some kind,” Sumner chimed in, “my husband, who happens to be in construction, was even more adamant that we got one. He said, ‘Well, I’m just going to go and build a fence.’” Aided by several of his workers from Venus Contracting, as well as the couple’s own sons, they built the fence on a single Sunday evening. Beaming, Sumner added proudly, “He did a great job.” This was followed by a chorus of “Amens!”

Three phases of the community garden now done, it was time to begin planting, Phase IV. “That’s when we brought in Norm,” Williams said. Grefe, who was raised on an expansive Suffolk farm that his family still runs, added, “We just happened to have had all of these plants ready to go and be planted. So that’s how I came into the picture, donating the various plants needed.”

But Grefe didn’t just provide the plants; he also shared benefit of his years working on a farm. The team also sought the expert guidance of one “Farmer Chip,” aka Lafayette Powell, owner of Deerehaven Farms, Surry, VA. Powell once led a 4-H group and the children mentees he nurtured coined the name of his farm, a tribute to the fact that deer hunting was not allowed there. Powell was selected because he had helped to launch other community gardens. Early on, in the creation of the Stanhope House garden, he volunteered his time twice a month, providing guidance and instruction and often becoming actively engaged.

Once the garden began yielding tasty and colorful fruits and vegetables, including the likes of okra, eggplant, tomatoes, and peppers, Chef T became a familiar face in the Stanhope kitchen, teaching basic culinary skills, while exhibiting a real penchant for designing creative, tasty meals. “Chef T has the creativity and expertise,” Bailey said, “and there was a desire to do more with our fresh produce grab bags. The whole taste test idea was to have somebody to come in and take the fresh fruits and vegetables that come in on a weekly basis and make them come to life.”

The team had already established “Wellness Wednesdays” for the 50-Plus Splash Club at the Southside Aquatics Center, providing a “fresh produce marketplace” that allows the seniors to shop for fresh produce, get samples, and to sit in on presentations conducted by Bailey and Chef T. Every Monday the group receives a shipment of fresh fruits and vegetables, distributed by an anonymous local food distributor. The youth assemble these delectable items, now occasionally mixing in some of their own community garden grown produce, to create “fresh produce grab bags,” which are a genuine hit with the 50-Plus Splash seniors.

Additionally, last April, Chef T and Bailey developed “Taste Test Tuesdays,” a weekly treat that uses produce from both the garden, as well as what is donated by the food distributor, to provide the youth with delicious, inventive meals created by the talented chef. Amongst the favorites are broccoli slaw and spaghetti prepared with fresh okra and ground turkey. Yet, as Sumner advised, “Some of the items, like starfruit, are exotic, those that this demographic doesn’t normally choose to purchase. So, it gives you the opportunity to try something different.”

With all of this talk about food making my stomach do gymnastics, I decided to ask these seasoned visionaries the same question I posed to Montique, ‘If you were a fruit or vegetable, what would you be?’ As suspected, the responses comprised a smorgasbord that made me even hungrier. Williams said she would be a strawberry, because it’s “sweet and tangy.” Grefe thought he’d be a pepper, “Because I am very adaptable and able to thrive in a variety of conditions and prolific all season long.” Potts didn’t hesitate and added that she’d be a tomato. “It’s very versatile,” she said. “Some people don’t know if it’s a fruit or a vegetable. It’s a fruit when you eat it raw and ripe, but it’s a vegetable in fried green tomatoes.” Bailey had similar sentiments, but chose the potato. She said, “I am not from Idaho, but potatoes are very versatile. I love potatoes! You can put them into potato salad.

You can mash them. You can make French fries.” Sumner waxed philosophical. She deferred to the old adage “An apple a day keeps the doctor away.” She noted, “This is one of the reasons why I wanted to see a community garden here, because I know fruits and vegetables and herbs are to be used for holistic purposes. What a wonderful thing for everyone else to know and take part in that process.” Everything about the Stanhope House community garden will make your mouth water. The people behind the project have found a great recipe and have all the right ingredients.