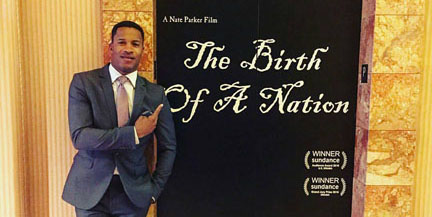 Norfolk is planning a hero’s welcome for Nate Parker, the Director and Producer of the movie “The Birth of a Nation” whose national premiere is scheduled for Norfolk, his hometown, on September 27. The event will be held in several of the 18 auditoriums of the MacArthur Mall Regal Cinema complex, where some 600 people will be invited to view it, according to activist Michael Muhammad, who has been helping to organize it.

Parker was in Hampton Roads in late June to scout out various venues for the official American premier of the movie. He held a reception at the Historic Attucks Theater on Church Street, which was attended by members of the community, academics and the media where Parker announced his designs to stage the premiere here. Norfolk Councilman Paul Riddick was the host for that event.

During Tuesday night’s City Council meeting (August 22), Riddick announced the premiere and delivered a strong statement of support for it. “Here is an opportunity for him (Parker) to show his appreciation and that he cares for his hometown,” said Riddick. “He is coming back home to highlight his work, which could win an Academy Award.” The late September event will be sponsored by Fox Light Film, which owns the rights to the film, Creative Nation, a national p.r. firm, and the City of Norfolk.

Muhammad said Parker and the participants at the event will be given the “red carpet treatment” to show the respect and support for the “hometown hero’s achievement.” “The Birth of a Nation” is a modern-day drama film about Nat Turner, the slave who led a rebellion in Southampton County, Virginia in 1831. The film is co-written, co-produced and directed by Nate Parker, in his directorial debut.

It casts Parker as Nat Turner, and co-stars Armie Hammer, Aja Naomi King, Jackie Earle Haley, Penelope Ann Miller and Gabrielle Union. Parker also petitioned financiers to invest in the film, ultimately getting a $10 million production budget and started filming in May 2015 in Georgia. The film won acclaim at the 2016 Sundance Film Festival earlier this year. Fox Searchlight Pictures bought worldwide rights to the film in a $17.5 million deal, the largest deal at the film festival to date. At the end of the festival, “Birth of A Nation” won the Audience Award and Grand Jury Prize in the U.S. Dramatic Competition. The film will be theatrically released in the United States on October 7, 2016.