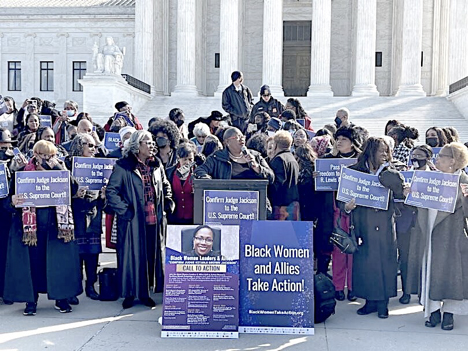 Several women-led groups held a rally in front of the Supreme Court on Monday March 21 to bolster support for Judge Ketanji Brown Jackson ahead of her Senate confirmation hearings.

Organizations including The National Women’s Law Center Action Fund, She Will Rise, Black Women’s Roundtable and others have continued their rallies in support of D.C. Circuit Justice Ketanji Brown Jackson.

“This is a moment that is historic but also filled with so much possibility for all of us,” Fatima Goss Graces, president and CEO of the National Women’s Law Center.

With a sizable crowd chanting and urging Senators to “confirm [Judge Jackson] today,” Graces and others spoke of the Judge Jackson’s vast credentials and the potential she’d make as the first African American women on the U.S. Supreme Court.

“Judge Jackson is a highly skilled and meticulous jurist who will bring a welcome perspective to the high court as the first Justice with experience as a public defender, and the first since Justice Thurgood Marshall to bring significant criminal defense experience to the Court, said Damon Hewitt, Lawyers’ Committee for Civil Rights Under Law.