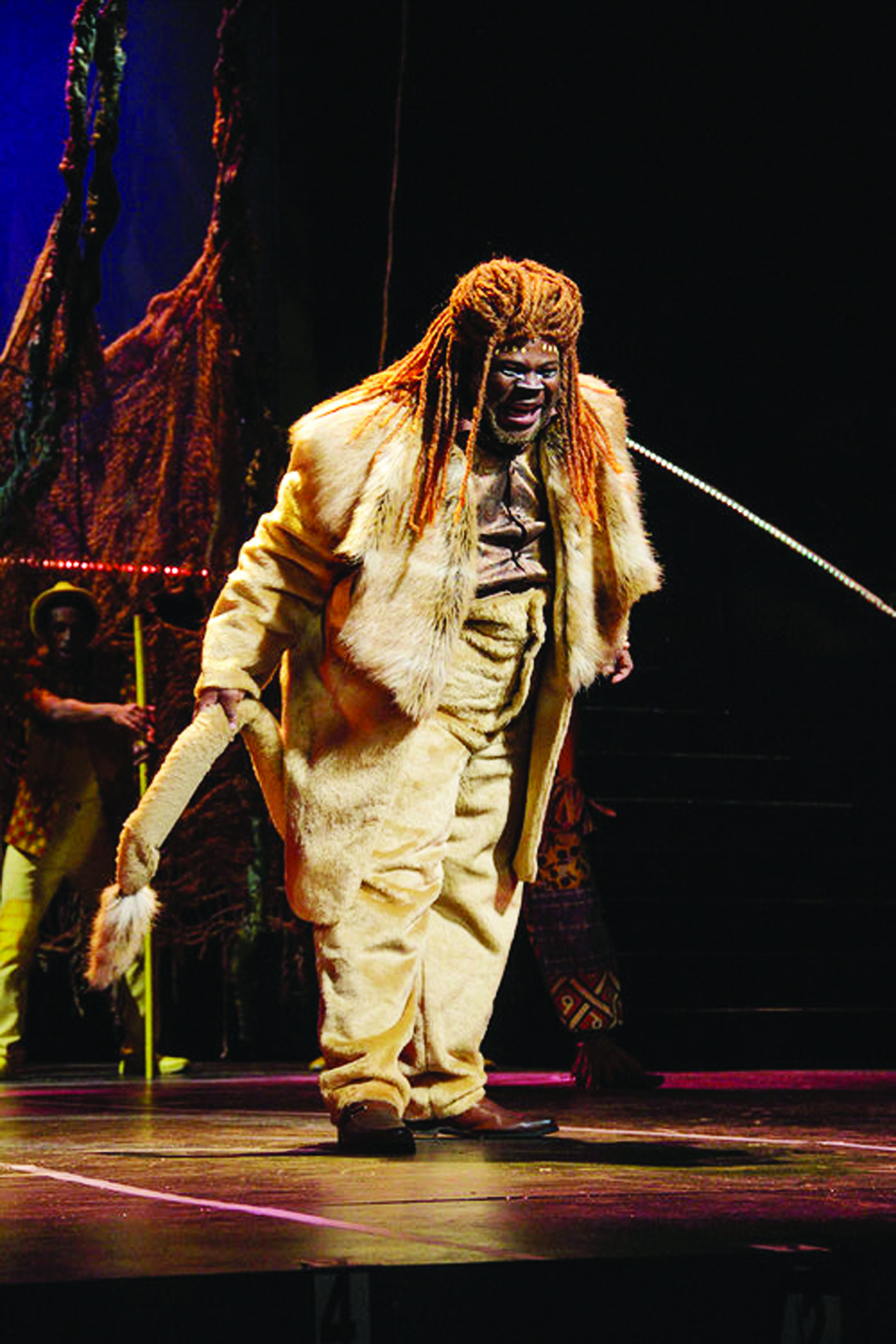 The Virginia Stage Company (VSC)/Norfolk State University (NSU) collaboration on the production of The WIZ at the Wells Theatre has proven to be a hit this spring.

The VSC/NSU joint venture is a rekindling of the 1974 stage hit The Wiz which was an Afrocentric interpretation of the famous movie The Wizard of OZ, that debuted in 1938.

The Cowardly Lion played by Bert Lahr in the now 75-year-old classic, joined Dorothy and two other main characters – the Scarecrow and the Tinman. The four were on a journey to Oz to petition the Wiz, who they believed would help them achieve their individual goals.

The King of the Beast was supposedly cowardly and nervous. But in the end, it was discovered that he was not so cowardly. The Scarecrow, who wanted a brain, found out he had one and the “heartless” Tinman indeed had a heart. Of course, Dorothy who wanted to return to Kansas, learned that she always had the ability go home on her feet.

The VSC/NSU’s Wiz Lion is played by Darius Marquel Nelson, who has been using his talent and his lion’s tail to capture the audience’s imagination during the show’s runs this spring.

Nelson said he notices the magic he has created with his performances, but does not want to “get big headed about it. I just love the comedy and the character.”

Nelson said, as a child, his mother introduced him to the movie The WIZ which was frequently aired on the African Heritage Network movie channel hosted by the late Ruby Dee and her spouse Ozzie Davis.

The Lion in the 1978 Wiz movie was played by the late Ted Ross, a television, movie and stage character who won a Tony Award for his portrayal of the Lion. He died in 2002 at age 68.

Ross won $5 in an amateur-night contest by singing ‘’Somewhere Over the Rainbow” from The Wizard of Oz when he was a teen.

Nelson fell in love with the Cowardly Lion as a child, too.

“I was amazed because I had never seen a man playing an animal before in a movie,” said Nelson. “If it were not for Ted Ross, I don’t think I would have dreamed of playing that role. His performance stuck with me.”

“As a child I would mimic the Cowardly Lion for fun, imitating the way Ross played the character,” recalls Nelson, now 26. “I have played in six professional shows before this one, but I truly believe this is something special because I started so early loving that character.

After graduating from Granby High School, Nelson joined thousands of other aspiring artists who flocked to New York or California for training, networking and getting a shot on Broadway or Hollywood.

He attended the American Music and Drama Academy’s New York and Los Angeles campuses. After that, back home, between auditions he has been keeping busy, running his own operation helping other aspiring actors develop the skills and tools needed to “get in the business,” and make a career and a living.

This is when he got wind of the VSC/NSU collaboration to do The WIZ.

Nelson is not a member of the NSU student Theater Troupe. But he has professional credit during this run of The WIZ at the Wells.

Anthony Mark Stockard, the Director of NSU Players and leader of the NSU Division of Drama, recruited Nelson to continue his education at NSU this fall and lend his considerable skills as a Spartan Thespian.

It only takes the make-up techs 15 minutes to outfit Nelson in the two-piece furry costume he wears for the performance.

But it is the Cowardly Lion’s tail in this production which has helped him to steal scenes, even having to return to the stage after a cast exit to retrieve it.

“He (the Cowardly Lion) is supposed to be nervous,” Nelson explains. “So like him, I even use it (the tail) to create a comfort or security zone when I am squeezing and twirling it.”

His mother died recently, so Nelson said his mother, Mildred Renee Nelson, did not get a chance to see her actor-son play a role she introduced him to as a child.
“Her legacy was she inspired me and many others because of her love of art and entertainment,” said Nelson. “Each time I get on that stage, it’s in honor of her.”