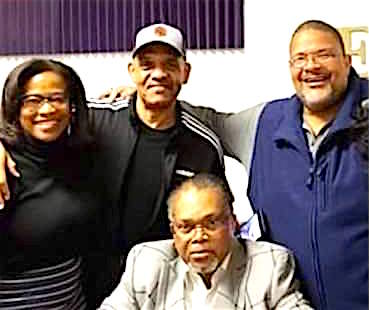 The year 2020 created plenty of issues to

debate on our front porches this summer as we sat properly socially distanced.

Good old-fashioned talk radio is still a good option to hear about, acquire information, debate such issues, and give listeners an opportunity to express their views on them.

So it is no wonder the Crusade for Christ, (CFC) morning talk show, airing over the airwaves of the Christian Broadcasting Company’s WPCE 1400 AM, continues to be a favorite among older and now younger listeners in Hampton Roads.

Weekdays from 6 a.m. to 7 a.m., the Crusade for Christ’s “Empower Hour” with the Crusaders— Carlos Howard, Kenny Wright, Clarence K. Neely and Sebrina Brown—are busy hosting guests and orchestrating conversations on a myriad of issues.

After the radio cast, there is an online Facebook Broadcast of the show to continue the discussions.

CBC was formed several years ago after Willis Broadcasting Company, founded by the late Bishop L. E. Willis in 1985, folded.

Although the name of the media company has changed, many of the business and faith-based cultural traditions have been retained.

Chester Benton, the General Manager of CBC, is a Willis Broadcasting Company alumnus and deemed the “Dean” of Black radio management and history in the region.

Benton said when Willis bought WRAP AM, the first of the stations he owned, he launched Crusade for Christ as an early morning information and worship program.

It was the first program of its kind focusing on the Black community.

“That was back in 1984, and Willis wanted the programs to be an unfiltered voice of the community where he could discuss issues affecting the Black community,” said Benton.

“I remember in ’84, he interviewed Rev. Jesse Jackson, who was running for president, and

addressed some of the key issues facing Black people.”

Willis used his leadership in the National Church of God In Christ (COGIC) and local politics to build listenership for CFC from Virginia to Texas via the first multi-state Black radio network he created.

“After Willis stopped hosting the show, his son

and grandson continued to host the Crusade,” said Benton. “CBC is just continuing that tradition. It is still an opportunity to enlighten and give Black people a free voice.”

The CBC is also an example of Black economic independence Willis, and now a new generation, relish.

As Willis started decades ago, Carlos Howard and other hosts start the show with the Gospel anthem “Open Your Eyes,” and then the Negro National Anthem is played, to highlight the faith-based mission of the show and CBC.

Howard, who once owned a funeral home in Norfolk’s Park Place section, has been the most prominent host of CFC for the past two years,

“When there is no voice of God in the form of governance… there will be injustice imposed on our community,” said Howard. “Crusade has been an

independent and unapologetic voice for Black people to hear information and views on issues which impact their lives for 45 years.”

Local politicians from both parties, mayors, preachers, police chiefs, educators, representatives of corporate America and others have been grilled and given a platform and voice on CFC.

“If they need the Black vote, they will come to us to connect with Black voters,” said Howard. “We prepare and ask them tough questions on issues. Voters can tell when they are sincere and not being truthful.”

Former Portsmouth Mayor and businessman Kenneth Wright provides a very candid and insightful voice on political issues locally and nationally, when he is behind the microphone on CFC.

“What else do we have other than Crusade for Christ or the New Journal and Guide to provide a political voice for Black people,” said Wright. “The issues facing Black folk nationally are right here in

Hampton Rods and they need to be talked about.”

WHOV, which is owned by Hampton University, and WNSU, owned by Norfolk State, are public radio outlets that provide public service programs targeting the Black community, too.

WPCE 1440 and WGPL are two of the AM stations, along with WBXB 100.1 FM, and soon to launch WPCE 94.5 FM that are under the Christian Broadcasting Company umbrella.

radio platform in the region. That grants its independence to operate without being filtered by white corporate media interests.

Benton said many popular and profitable broadcast outlets catering to African Americans are owned by white corporations. They often do not provide the public service or news voice that Black people need to be informed.

Benton said due to expense and unreliability, CBC does not subscribe to a rating service to measure the number of listeners who tune in to Crusade For Christ and other programming offered by the company.

The higher the listenership measured by the services, the more attractive broadcast outlets are to advertisers. Also, this formula dictates the rates to charge advertisers.

Benton said the CBC audience is older which tends

to be more reliable, because of the mix of secular and faith-based programming.

He said CBC has managed to secure enough local and national advertising to produce a strong stream of revenue to maintain operation.

Benton said that due to the COVID-19 pandemic, many churches are unable to schedule traditional services on Wednesday night and Sunday morning.

But the churches are filling the void with virtual

online via CBC airwaves, which he said has expanded listenership during the course of the day.

“There is no other place where Black people can hear the truth about the political issues,” said Wright. “Not only the presidential race, but the political fights in Portsmouth. We have economic and social

issues which are all connected.”

After the attack that left 12 people dead at the Virginia Beach Municipal Center in May 2019, Carlos Howard invited Clarence K. Neeley to lend his view on how people can respond to and prevent such tragedies.

A native of Camden, New Jersey, after a 20-year stint with the Coast Guard, Neeley, landed in Virginia Beach. One of several businesses he founded involved training personnel to respond to deadly attacks in public buildings.

The Virginia Beach mass shooting which killed 12 people involved mostly Virginia Beach city employees slain by a fellow employee who himself was killed by police.

Howard summoned Neeley to the studio to discuss the issue.

“Shortly after that, Carlos had to go into the hospital for a procedure and asked me to sit in for him,” said Neeley, who hosts and is a producer of the CFC. “I had no training in broadcasting. But one of the

employees showed me how to operate the switchboard. You can say I got here by accident. But I have enjoyed every minute of it.”

He continued, “Crusade For Christ is a much needed independent voice for the community. It is wonderful to work for an independent Black media organization

“We can invite people to come on the air and

tell the truth and provide the information and insight on all of the issues facing us today.”

In this article:COVID, COVID-19, Radio, WRAP AM