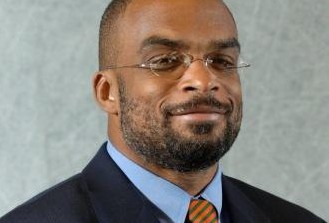 ETTRICK, Va. – About two months after Dr. Makola M. Abdullah, 46, mingled with faculty, staff, and university officials at an on-campus gathering held on Dec. 11, he will slide into his chair in the president’s office on Feb. 1 at Virginia State University.

Virginia State’s 14th president is a native of Chicago. At age 24 he was recognized as the youngest African-American to ever receive a Ph. D. in engineering at Northwestern University, from which he earned his master’s degree.

Abdullah, who received his bachelor’s from Howard University, is married to Ahkinyala Abdullah. They have two children. His son, Mikaili, attends Morehouse. His daughter Sefiyetu will attend Howard.

A proponent of Historically Black Colleges and Universities, Abdullah has spent his career in increasingly responsible positions at several HBCUs including Florida Memorial University and Florida Agricultural and Mechanical University (FAMU). Most recently, he served at Bethune-Cookman University as provost and senior vice president.

Abdullah told the gathering he aims to change Virginia State into Virginia’s Opportunity University and outlined his four core beliefs. “I believe in God,” he said, in a press release on Virginia State’s website.

I have a long history of understanding the mission of HBCUs. HBCUs represent opportunity in America.”

During his 15-year tenure at FAMU, he was dean and director of 1890 Land Grant Programs in the College of Engineering Sciences, Technology and Agriculture. Under his leadership, the college increased its overall enrollment by 20 percent and funds for research and academics by 10 percent, to $9.5 million, according to his bio.

He is the author of more than 25 Earthquake and Wind Engineering reports, which have been funded by the National Science Foundation, NASA, Boeing, FEMA and others.

Commending the new president’s credentials, VSU Board of Visitors Rector and Search Committee Chair Harry Black said his approach to higher education makes him unique. “In Dr. Abdullah, we have a president who will position VSU not only to meet the challenges of ever-changing technology, but to lead the transformation; to challenge others to keep pace with us.”

Black said Abdullah as a faculty member at FAMU secured more than $5 million for research and more than $20 million overall in federal funds. In addition to increasing the number of faculty with terminal degrees by 25, which was a 12.5 percent increase, he helped secure more than $1 million to support the new Center for Entrepreneurship and Economic Development at Bethune-Cookman.

The third president of Virginia State in a year and a half after former President Dr. Keith Miller was forced out and Interim President Dr. Pamela Hammond announced in October that she would resign, he said the top priorities are increasing and maintaining enrollment and expanding the university’s footprint.

“A year from now, I expect us to be on firm financial footing,” Abdullah said in a recent WRIC-TV news report. He will receive an initial base salary of $335,000.

Virginia State student Samuel Kelly, a junior, said at the recent gathering held to announce Abdullah’s appointment, “He seems like a great candidate, but I am just eager to see what he’s going to do.”

But Abdullah zeroed in on his specific goals in the Progress-Index, “Like you, I expect excellence and I own it,” he said. “Like you, wherever I am in the world, the driving force that propels me, propels my every action, is a commitment to a better world for all of us for today and for generations to come.”