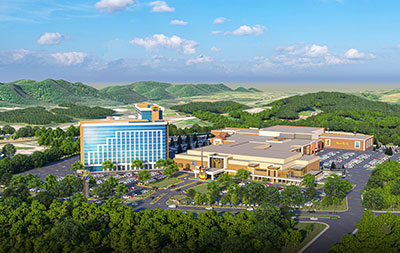 The Commonwealth of Virginia is closer to offering its residents and visitors to the state a land-based gambling casino in four cities.

The chosen operators of casinos in Bristol, Danville, Norfolk and Portsmouth are at varying stages of developing plans for their locales seventeen months after voters approved referendums to build them in these cities.

The temporary Bristol Casino, the future home of Hard Rock, is now scheduled to open first, July 8, according to a recent announcement by the main developer, Hard Rock International.

The full-service casino will operate in the former Belk’s women’s store location at 500 Gate City Hwy.

“We are excited to open the casino, and welcome guests,” Jon Lucas, chief operating officer of Hard Rock International, said in a written statement.

“As Virginia’s first casino, ‘Bristol Casino – Future Home of Hard Rock’ will be a wonderful addition to the Hard Rock global portfolio of dining, hotel, and entertainment properties. I am pleased by the significant progress that Allie Evangelista and her team are making towards a July 8 grand opening celebration for Bristol.”

Richmond voters rejected a referendum for a casino.

In Danville, construction crews began site preparation work for the $500 million Caesars Virginia Casino in early October at the former Dan River Inc. factory property. This put the construction schedule about two months ahead of plans for laying the casino foundation in the first half of 2022. Demolition and removal will run into the second quarter of 2022.

Construction is expected to last two years with the grand opening of Caesars Virginia Casino planned for late 2023.

Portsmouth’s Rivers Casino Portsmouth is on schedule, to be the first in the eastern region to open in January of 2023, according to Brian Donahue, Interim Director of the Portsmouth Department of Development.

According to Donahue, initial construction activities have already commenced.

“I think we will see the construction of the building go vertical in the coming month,” he said. “We are very excited about our position to be the first to open in the region.”

In Norfolk, plans are underway but Jay Smith, spokesman for HeadWaters Resort Casino, said no specific timeline has been set. But once it is, Smith said, the HeadWaters Resort & Casino will be a $500 million project paid for by the Pamunkey Tribe.

“The City is not contributing to the cost of construction or operations,” Smith said in an email to a list of questions from the GUIDE. “In fact, the Tribe is purchasing the property from the City at a cost of approximately $10.5 million and the project will provide significant tax revenue to the City of Norfolk.”

Recently the Tribe talked with Norfolk about the possibility of opening a restaurant and lounge with limited gaming in an underutilized space at Harbor Park.

Smith said “no final decisions have been made about that yet, so it’s still premature to make any announcement about it.”

Smith was asked about what kind of development, and construction contracting opportunities are available to African Americans.

He said the Pamunkey Tribe intends to have a workforce—both in the construction and operations— that reflects the community.

workforce comprised of 50% minority and 90% local,” he said in the emails.

Portsmouth is collaborating with Tidewater Community College (TCC) to train people to perform various jobs. When asked if such a partnership will be used in Norfolk, Smith said his groups are planning to develop similar workforce training programs with local colleges, universities, and workforce development organizations in the area.

Apart from employment and tax revenue, Norfolk will receive other benefits once the Site is opened, Smith said.

“The Pamunkey Tribe is committed to being a great community partner,” he said. “We haven’t waited for the facility to open before getting involved in supporting the community. For nearly a year and a half, the Tribe has been a strong partner in fighting food insecurity by

contributing more than $300,000 to local food pantries and other meal programs serving people in need.”

Smith said they also have pledged $150,000 in support of opening a grocery store in the St. Paul’s neighborhood, which is currently a food desert.

“We will continue to look for additional ways to be a good neighbor and supporter of programs in and around Norfolk,” he said.

Smith said Norfolk’s HeadWaters Resort & Casino will be a destination resort that will draw people from the mid-Atlantic region and beyond. It will feature a 300-room full-service hotel, 5-7 dining options, an