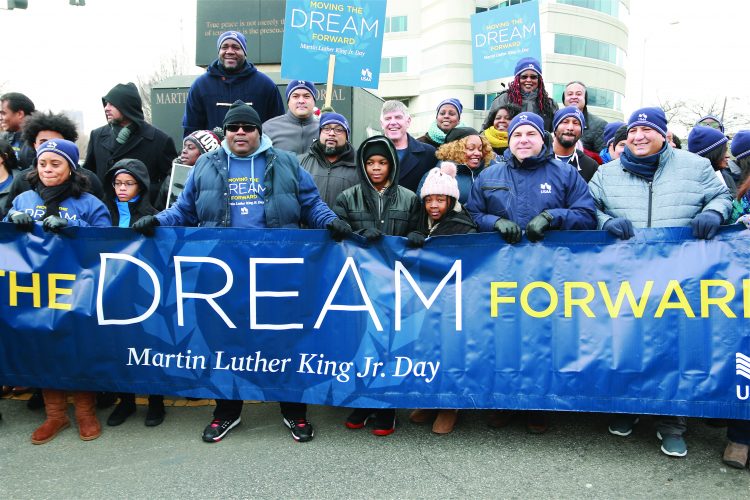 The event on January 15 organized by the city was an hour of oratory and music, before the overflow crowd marched up Church Street to the King Memorial where a wreath was laid.

“Two words describe the comparison between King and Riddick,” Councilman Thomas told the audience. “Equality and justice. Often we are at council working on schools and funding. But Mr. Riddick reminds us of taking care of the people.”

Riddick, who was the originator of the annual event, noted the “diversity” and “honesty” of the council which has four women, four African-Americans and four Whites.
He said Dr. King had “made life better for all Americans,” in contrast to the nation’s current president, Donald J. Trump.

“We want to make sure all those things generated by 45 in Washington, when it comes to Norfolk, we will stop it,” said Riddick.

As he has done in past years, Riddick reminded the audience the city’s budget will be written and will be approved by July 1. He said that council is considering many factors, including adequate funding for education and some pending item related to the demolitions of three of the city’s public housing projects which he said was about “housing and morality.”

Police Chief Larry Boone, who was accompanied by a large contingent of his officers, said it was the negative side of law enforcement which brought the attention of the civil rights struggle to the nation. He said in 1963 Birmingham Police Chief Bull Conner used German shepherd police dogs to attack civil rights protestors in that city.

Boone talked about the efforts to lower crime in Norfolk.

He said it was done with hard work of his officers and the cooperation of community leaders.

Boone also mentioned his officers should be granted respect for their hard work. He added, that when tensions arise between residents of color and his office, “give us the benefit of the doubt.”

He said he tells his officers when they interact with Black and brown communities there are some underlying social and personal factors at play.

While everyone may be born “perfect,” Boone said, life experiences may negatively affect a person’s actions and choices. “I tell my officers as we go about our daily interaction with people, we’ve got people walking around with … baggage. But I beg of them to treat everyone with dignity and respect.”

Artist Ayokunle Odeleye, a sculptor, artist and professor at Kennesaw State University in Georgia, was introduced as the creator of the five sculptures themed “Accession to a Higher State of Being,” a series of sculptures he fashioned and are located at Church and Henry Street near the Attucks.

Members of the Alpha Kappa Alpha Sorority, Odeleye and council performed a symbolic ribbon-cutting unveiling of them during the event.

Four of them are 8 feet high concrete sculptures which line up behind a 30-foot structure.

The keynote address was delivered by Dr. Sharon S. Riley, Pastor of the Faith Deliverance Christian Center of Norfolk. Riley coordinates and manages all administrative functions of the church.

“Today we come together to celebrate the life of Dr. King. We celebrate his vision, sacrifice and legacy,” she began.

“We do this because we refuse to surrender him to simply becoming a historic figure whose work belongs to the ages,” she said.

Dr. Riley said that King was “a man God used to prick the consciousness of the United States … to fulfill the promise made in the constitution.”

“Too soon his life was taken brutality,” she said. “God used his work … life and his death to force this nation to face the brutal ugliness … the underbelly of what has been a part of us since our inception.”

Riley said Dr. King’s movement created advances in civil rights.
“For a long time we enjoyed prosperity in our community,” she said. “We enjoyed seeing the walls of Jericho come down … the powers of the enemy being shredded and torn to pieces … even seeing an African-American president.”

Riley said some people believed the era of racial inequality was over.

But she said “the spirit of injustice persisted in the judicial and political institutions and it seemed that we were being pulled right back into where we were.”
“It seems the dream could possibly die,” she said. “But I come to tell you today.. when the dream comes from God, that dream cannot die.”

Riley said people should not wait for political leaders to motivate them to reclaim the dream of Dr. King, but each of us should “reclaim the mantle and not sit on the sideline.”
She said parents should teach their children about the strength of the people who came before them, including those who survived the passage from Africa, while others perished, because “they refused to die.”