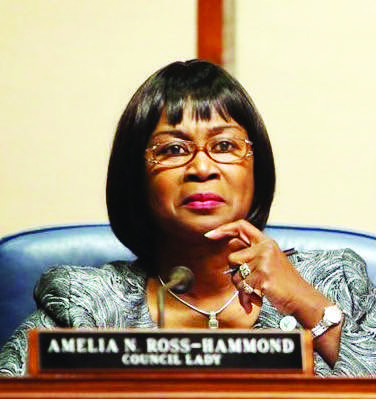 Organizers of the effort to plan, build and operate the proposed African-American Cultural Center (AACC) in Virginia Beach, say they hope to complete the first phase of a capital campaign by the end of the year.

The goal, according to its leaders, is to generate the $8.5 million needed to begin construction of the first phase of the structure and open it by 2020.The 2nd phase is scheduled for completion in 2022.

Dr. Amelia Ross-Hammond, AACC’s Founder and Executive Director for Project Management, is a former Councilwoman, in the City of Virginia Beach, and a retired Distinguished Professor Emeritus from Norfolk State University.

She, along with the AACC Executive Board, parlayed a unique private/public partnership with the City in October 2015, resulting in the conveyance of a 4.83 parcel of land for this much needed community project.

“We believe that a cultural center like this would help build lasting relationships between different generations of African-Americans in the 12 historically African-American neighborhoods, while also being inclusive of all people in the regional community,” she said. “It will share Virginia Beach/Princess Anne’s rich African-American history and culture from various perspectives, beginning from mid-1600s.

“This would play a leading role in issues related to social and economic equity, create jobs, and promote additional tourism,” she continued. “We envision that AACC will be the regional leader in generating historical and cultural content through programs, artistic performances, and curated exhibits. Unlike most museums, this will be an interactive, educational and family-oriented center.”

On December 5th, Ross-Hammond and the Executive Board presented the feasibility study and marketing summary to City Council. Both were well received and the Council encouraged them to move forward.

The feasibility study conducted by Webb Management Services Inc., of New York, detailed the project level of support and patronage.

Hanbury Architecture Planning of Norfolk is doing the physical planning and conceptual design of the facility.

Webb Management also researched the business impact on the city of Virginia Beach and regionally, comparing it with existing ones in other nearby locales. The study also included a five-year Pro- forma Budget and three Critical Path Plans.

A nearby basketball court at Lake Edward Park will be retained to illustrate the AACC’s effort to make the facility a complimentary part of the community.

The site is also near the affluent African-American L and G Gardens community, the Virginia Beach Tri-cities Public School, Virginia Wesleyan University, the military base and an emerging Industrial community off Northampton Blvd. It will be a sustainable environmentally friendly structure.

Ross-Hammond said that the fundraising operation to make the AACC a reality will be officially kicked off this spring and will be a continued and sustained effort to its completion.

She said the funds will be generated from both private and public sources. A subcommittee from the Executive Board along with committed leaders will assist to organize and implement the campaign long term.

Ross-Hammond said the total cost of the AACC will be $20.8 million.

The first phase totaling 14, 799 square feet will cost $8.6 million and will include spaces and programs for a 7,334 square feet Great room with Art exhibits of temporary/rotating contents that teach visitors about the history and culture of African-Americans in the Hampton Roads region. It will accommodate 200 plus occupants.

Other plans for the area include space for an “artist in resident”, a multipurpose area for performances, events, community gatherings, meeting rooms or study and research, kitchen and concession. It will also have spaces for teaching arts, crafts, dance and digital learning.

The second phase which will be a total of 20,389 square feet, is scheduled to be opened by 2022. It will include a performance theater and stage, flexible seating, a scene shop, dressing room, storage and operations space with seating for 250 people. Converted, it could house 428 occupants.

There will be an outside events space, and a stage with 326 seats. Both phases will have green open spaces for outdoor performances.

The facility will not only service and count on patronage from the populations of Virginia Beach, but the region, statewide and nationally can enjoy its amenities. Ross-Hammond said the study shows that African-Americans make up 32 percent of the region’s population, when they only make up 12 percent of the national census, according to the marketing analysis to define that population’s potential for supporting the project.

She said the African-American population in the region is economically and educationally strong enough to support the facility’s wide range of cultural and educational programming open to all ethnic and cultural groups. Also the facility will be available for research, lectures and exhibitions of arts and historic resources with the local universities and colleges.

“More importantly, we keep the community involved by hosting Town Hall meetings and events to get their input and keep them abreast of our progress,” sid Ross-Hammond.

On February 3, the Chrysler Museum in Norfolk will host a Gallery Talk about the Center as part of its Black History Month activities. The event will feature Ross-Hammond and Docent Becky Livas, co-chair of AACC’s Oral History Committee.

“I am truly blessed,” said Ross-Hammond, “with a wonderful and productive slate of officers and board members as well as a Community Advisory Committee who also share a passion for making this project a reality and that is half the battle.”

The AACC Executive Board is composed of 10 members and includes some of the most prominent African-American professionals, civic and faith-based leaders in Virginia Beach and the region: Hugh Greene, Jim Banks, Bruce Williams, Juan Turnes, Cheryl Davidson, Vanessa Moore, Wayne Jones, William Terry Calhoun and Dr. Linda Bright, CEO of Health Care Services of Virginia Beach, Inc.. A number of other persons serve as honorary members.

Bright, the President of the AACC Executive Board, said, “This is close to my heart. We want the entire community, not only Virginia Beach, but region, state and the nation involved and to enjoy it. We definitely want a broad range for people to be involved especially our young people, because history and our culture is important to all of us.”