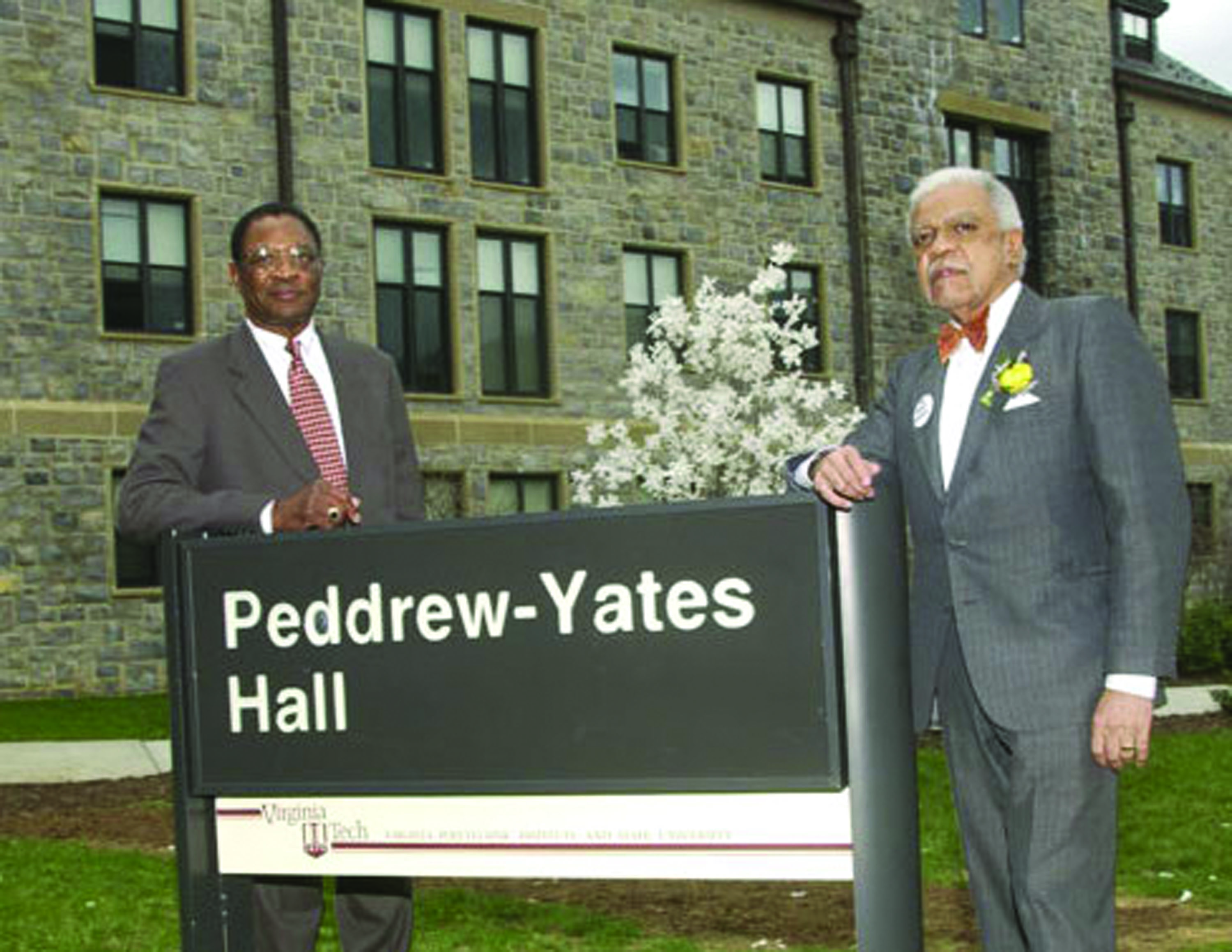 When Irving Linwood Peddrew III left home in Hampton in 1953 to enroll at Virginia Tech University, he could not have predicted that the university would name a residence hall after him in 2003 nor award him an honorary bachelor’s of science degree in electrical engineering during this year’s commencement ceremonies. Here’s why either prediction would have been difficult to make.

Peddrew, now 80, as Virginia Tech’s first student of color, encountered numerous obstacles on the campus in rural Blacksburg. For example, he could not live on campus. So he lived in the home of an African-American couple, Mr. and Mrs. William Hoge, about a mile from campus. Preoccupied with lugging his cadet uniform and gear back and forth each day, or changing in the room of another cadet, he could not eat in the campus cafeteria.

“Regretfully, he was not treated well,” Virginia Tech President Tim Sands told about 25,000 who attended the university’s commencement ceremonies in May in Lane Stadium. “He suffered social isolation and pervasive discrimination on our campus and in the surrounding community,” Sands said. “Three years of isolation and accumulated injustices weigh heavily. His treatment here ultimately compelled him to continue his studies on the West Coast and join the workforce there. That was not his choice. We failed him.”

While the landmark Brown v. Board of Education decision on May 17, 1954, outlawed separate and unequal segregated public education nationwide, the winds of change did not subside. They continued to blow. Still, the winds of change tend to blow slowly. So slowly – William Arthur Ward, one of America’s most quoted writers once said humans respond in one of three ways to the winds of change, “The pessimist complains about the wind. The optimist expects it to change, the realist adjusts the sails.”

The point is Peddrew adjusted his sails as the winds of change blew through Blacksburg. He transferred to the University of Southern California but was drafted. He served in communications intelligence in Berlin with the Army Security Agency. He did not complete degree requirements at Virginia Tech. Still, he worked several years in the aerospace and fruit industries, at Newport News Shipbuilding, and at Hampton University before his retirement in 1994.

The winds of change carried Peddrew to unpredictable heights, in other words. After he made history by enrolling in Virginia Tech in 1953, his photo appeared in many news reports from the Roanoke Times to JET magazine. The point is he could not have predicted that about 60 years after he enrolled at Virginia Tech, thousands of people in Lane Stadium would rise in a standing ovation to honor him, or that Peddrew-Yates Hall would bear his name and the name of Charlie Yates, the first African-American student to graduate from the university in 1958.

In an interview with a Roanoke television station days before he received the honorary degree, Peddrew said obstacles can launch unseen benefits. “Accept the valleys with the high points and realize there will be times when they are challenged,” he said. While he would encounter new obstacles and hurdles, Peddrew said they strengthened and enlightened him. “There were always those you had to contend with who didn’t think as highly of me as I felt they should and who evidenced their feelings of bigotry and narrow-mindedness.” Peddrew smiled. “They are still out there. They haven’t gone away. But never give up, give out or give in. Realize many came before them and made sacrifices. They are walking on the shoulders of those who preceded them.”

Describing the sense of satisfaction that he felt seeing his name on the residence hall at Virginia Tech, Peddrew said in a May 13 interview with WAVY-TV, “I felt super honored because it was such a big thing considering the fact that I wasn’t allowed to live on campus when I came to school here.” This means long after the winds of change subsided, its slow, puzzling path was crystal clear. “Irving Peddrew succeeded,” Sands said while presenting the honorary degree. “He set an example of strength and character. He set out to create a path for others to follow and they did. He wanted to make a difference in this community, the commonwealth and the nation. And he has … No one here today is more deserving of this degree than Irving Linwood Peddrew, and it’s long overdue.”