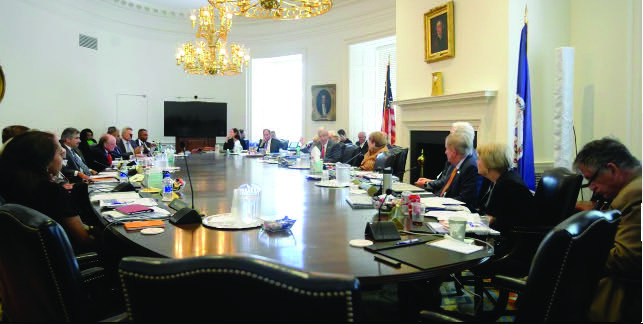 CHARLOTTESVILLE
The University of Virginia Board of Visitors voted unanimously on Sept. 15 to remove plaques that honor the Confederacy to a location that has yet to be determined, and to ban open flames.

Board members made the announcement the same day the university announced its new president, Dr. James E. Ryan, a dean at Harvard University, according to The Washington Post. Ryan will replace Teresa Sullivan, whose term ends this academic year. While Sullivan’s departure was planned, she has been sharply criticized by faculty, staff, and students for how the university handled the torchlight march by white supremacists and Nazi sympathizers last month, which left one woman dead and 19 injured.

In addition to voting to remove two plaques from the university’s Rotunda that honored students and alumni who fought and died for the Confederacy in the Civil War, the board also agreed to revise the school’s open-flame policy and declare the Lawn, the university’s most prominent outdoor public space, a residential facility.

The board’s action means open flames, explosives and weapons will be banned from the Lawn. Specifically, the new open-flame policy clarifies the university’s ability to enforce existing laws that prohibit the unauthorized use of open flames, as well as state laws that ban the burning of objects “in a manner having a direct tendency to place another person in reasonable fear or apprehension of death or bodily injury.”

The three demands approved by the Board of Visitors were among 10 formulated by numerous student groups and endorsed by the student council. Also, in response to one of the demands, the school agreed to acknowledge a $1,000 gift in 1921 from the Ku Klux Klan and contribute the amount, adjusted for inflation, to a suitable cause.

Following the vote to remove the Confederate plaques, Maurice Jones, one of three African-Americans on the 19-member board, said, “These were not young men dying for America, they were dying for the Confederacy. And if they had won, I wouldn’t be here with you today.”