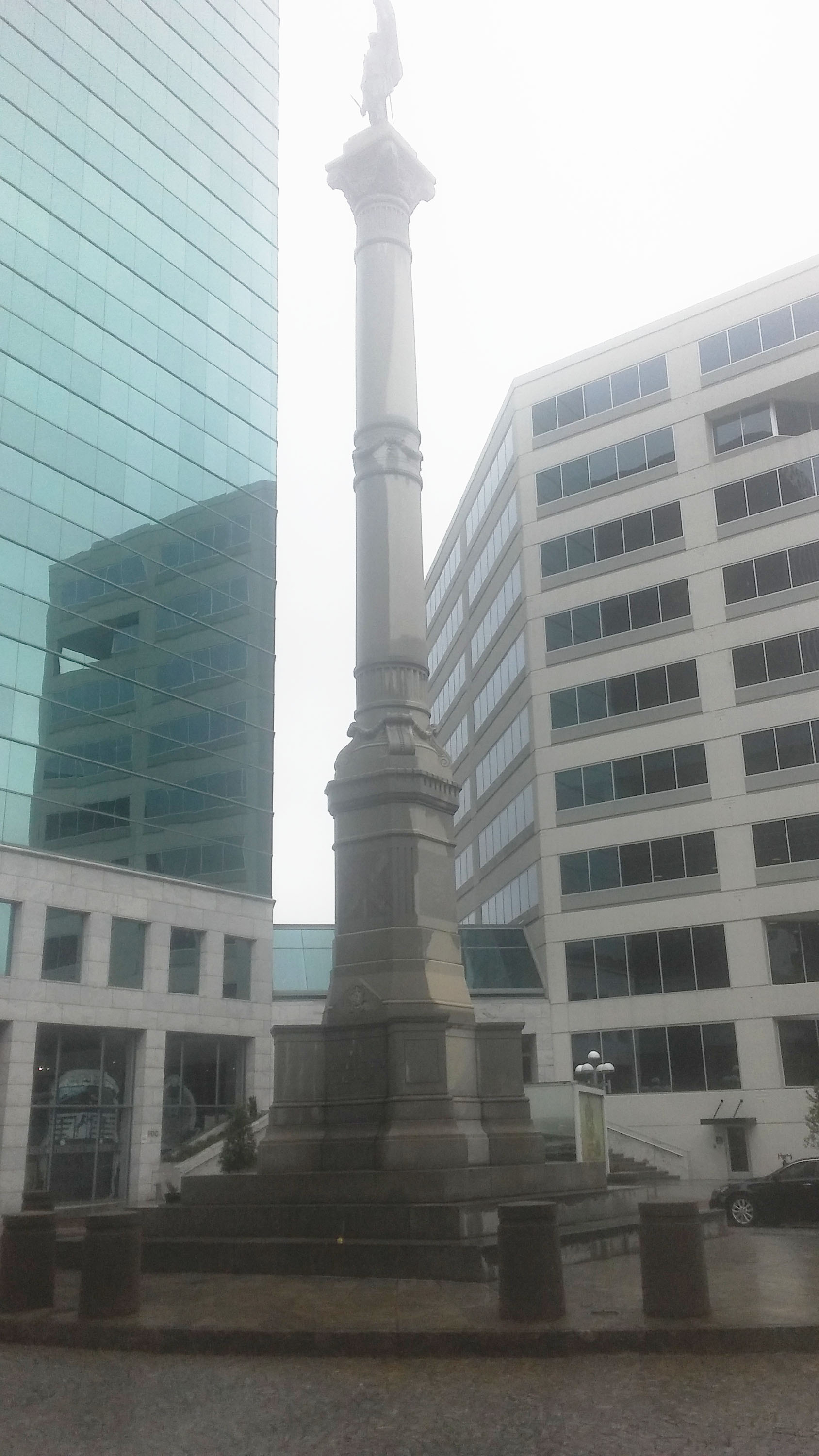 Recently the city of New Orleans completed the removal of Civil War Monuments as residents showed their opposition or support for removing them.

Just recently in Charlottesville, Virginia, the leader of a White Supremacist group led a torch light procession through the city protesting that city’s efforts to remove them.

And here in Hampton Roads even more recently—Norfolk’s downtown monument that celebrates the city’s history of its Confederate past was vandalized and spray-painted with the word “Shame”.

In June of 2015, 21-year-old Dylann Roof entered the Emanuel African Methodist Episcopal Zion Church during a weekly Bible study meeting, killing eight African Americans who had welcomed him into the basement of the sanctuary before he unleashed his violence.

Roof was tried and found guilty of the carnage, and he admitted he has no remorse for his actions. He was inspired by ideals of White racism, cultivated by the Civil War and the monuments built to honor the men who fought it.

It was that incident which re-triggered the ongoing push to have the monuments banished in cities across the country.

Most resistant Whites believe the monuments are an important part of their history and are under attack because of the misrepresentation of ignorant narrow-minded people like Roof.

These monuments exist throughout the South. Locally, in addition to the one recently vandalized in the heart of Norfolk’s business and banking district, one sits in downtown Portsmouth that has come under opposition.

Richmond, the state capital of Virginia and the capital of the Confederate government to the very end of the Civil War in 1865, is full of these monuments.

So much so that in the heart of the city is a street named Monument Avenue, adorned with various statues and other symbols of the state’s contributions to the Civil War and the glorious dead and their leaders.

Several decades after the end of the Civil War, southerners began to refashion and glorify the war.

Along with establishing Jim Crow laws in the late 19th century, cities began erecting monuments calling attention to the “cause” and those who died to secure it.

They deliberately ignored that Dixie fought the war to secure its right to practice slavery. It was the southern region’s fight to secure its economic rights against an intrusive, northern-backed federal government.

The day before the first shots of the war were fired, the most valuable commodity and asset in this nation were the thousands of Black female and male adult slaves and their offspring.

Cotton was the South’s most profitable crop; shipped overseas at a handsome profit. Remember they did not have to pay anyone to plant, cultivate and pick the valuable crop because they had thousands of valuable “unpaid” Black slaves.

It was the last time Whites in this nation had Blacks in total submission; a situation many racists wish existed today.

America’s present is haunted by its past, especially the Civil War.

So is the continued debate about race and the place of Black people in this country which is still not resolved.

After the Civil War, instead of fully embracing the Black race as full-fledged citizens and humans, specifically, there was a backlash.

Jim Crow codified the southern resistance to the idea of Black racial and economic equality, retarding Black socioeconomic growth to this day.

Violent oppression was used, notably lynchings. Segregation in housing, schools and jobs were applied to keep the “darkie in his place.”

The result – isolation, high poverty, and other ills which still impact Blacks significantly today; the legacy of sustained institutional racism still clinging to the American social and political fabric.

Many Whites still show a hatred for Black people and blame all of their economic and social shortcomings on them.

The current debate over those monuments is a good example of this nation’s inability to resolve the issue of race.

There is a civil war of ideals currently going on that is centered around those monuments and the ever present Confederate flag.

To begin to solve it – I say, Let the Damn Monuments Stand!

Whites want them to stand as a symbol of their glorious and proud history, which was painful to Blacks.

At the same time they can be a reminder to the people they oppressed, and who resent them, to fight everyday against what they stand for.

Regardless of the evil legacy of the true reason for the Civil War, many supporters of these monuments teach their children about the positive aspects of those monuments.

This will help parents and offspring against the Neo-Confederates’ desire to reclaim the meanest part of their past.

We cannot deny Neo-Confederates their historic legacy, however much as we dislike seeing them on a city’s landscape.

Their removal will not stop another Dylan Roof from being inspired by what he can read on the Internet or in some pamphlet sent to his home via the mail or from the mouths of his parents and mentors.

After WWII, all of the images of Nazi Germany were outlawed. But it has not stopped a new generation of people who thought like Hitler from existing.

Statues of Lenin and Stalin were pulled down when the Soviet Union collapsed, but today, supporters of communism, including the current Russian President, still regard them highly.

There are historic markers paid for by the state posted all of the region honoring pioneering Black men and women.

When you drive past Norfolk State or Hampton University, they are not just a group of buildings adorned by well-groomed lawns.

Remember their mission and the reasons why both were founded, and are still led by Black people, for the most part.

Hampton was built shortly after the Civil War to educate native Americans and Black people and it has sustained itself for years.

NSU began during depression in two rooms of a YMCA, when even Whites were not devising plans to create such institutions.

The recently reclaimed Colored Library in Portsmouth was paid for and built by Blacks during Jim Crow when the city said they did not deserve one built with city money.

The list goes on, not only as buildings and statues, but the achievement of African Americans who play roles once unheard of just 40 years ago.

If African Americans and others want to show their support for progress, diversity and tolerance, these are ideas they must fight to protect, as strongly as those who would destroy them.

So instead of plucking the Neo-Confederates’ nerves and calling for the removal of the monuments symbolizing a war they deem as the symbol of their superiority, I say, remember or better still, recognize and support the ones which symbolize the effort to overcome such thinking.