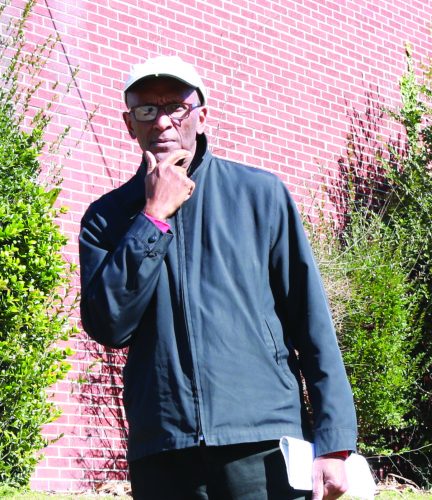 Four decades of studying and teaching the subject have given Charles Johnson, Jr. considerable gravity in the field of history education and research.

And as many people in his field, Johnson can’t resist chasing and securing pieces of a puzzle revealing the past and purpose of an event, person, place or thing.

After receiving a BA in History at then Norfolk State College (now University) and teaching at several area high schools before retiring, he has been digging into the history of Black cemeteries, for several decades.

One of his first projects was in Portsmouth as part of an African-American Historical Society objective.

Then he crossed the river to Norfolk and began looking into the legacy of Norfolk’s historic Black Calvary Cemetery and he did research on the West Point burials next to Elmwood Cemetery, as well as cemeteries in the Titustown and Oakwood sections of Norfolk.

For the past five years, Johnson has been chasing paper and personal ghosts emanating from a patch of land in the 700 Block of Goff Street in the Huntersville section of Norfolk, where the Mason Memorial Church of God In Christ sits today.

That church once was a Black Catholic parish in the city, and it operated a school on the site for African-Americans until the early 60s. The cemetery and the school are now gone.
The last recorded burial at the cemetery, Johnson said, took place June 11, 1941. In 1961 the church was closed and moved due to urban renewal and the birth of the Golden Triangle Hotel complex and the Scope Arena.

If you are not a history sleuth like Johnson, or a local resident in your 70s and older who lived near it, you would not know a cemetery ever existed in the 700 block of Goff Street.

“I heard of it because it was on the list of historic cemeteries in the city,” said Johnson. “When I finally went out to see the site, I saw a church and parking lot. But no cemetery. There were no head stones … nothing. So I started asking questions.”

Johnson said he talked to the Norfolk Department of Cemeteries, the City Archivists and historians at the Norfolk Public Library Sergeant Memorial Room.

There are still Norfolk residents who lived near the church and parishioners associated with St. Joseph’s whom he has consulted.

He also unearthed old residential insurance maps of Huntersville created by the Sanborn Fire Insurance Company from 1910 to 1921 or The Guaranty Title and Trust Company. Before cities developed their own maps of infrastructure and housing, insurance companies did them to chart the neighborhoods’ housing stock.

The fact that the cemetery existed was proven conclusively. But Johnson noted that another significant piece of the cemetery’s story was missing: What happened to the markers, remains/bodies once buried at the site?

Johnson thought he had discovered a vital answer to that question in a Dec. 25, 1954 edition of the New Journal and Guide.

It was an article about the consecration of Elder D. L. Williams as a Bishop at the 47th Annual Holy Convocation of the Church of God in Christ International at Memphis.

Williams was the minister at the Mother Church of God in Christ in Norfolk, and the article revealed the congregation’s expansion when it bought the cemetery to build a new sanctuary.
By this time, St. Joseph’s Catholic Church no longer owned it.

Today The Basilica of St. Mary of the Immaculate Conception in Norfolk is 126 years old and in 1961 when St. Joseph’s closed its doors, the two legacies merged.

According to the article, Elder Williams said that the bodies were removed so the foundation for the current church, costing some $47,000 at the time, would be built.

So if the bodies were removed, where were they relocated?

Johnson said The Basilica of St. Mary of the Immaculate Conception doesn’t have any information.

The church comes under the administrative umbrella of the Diocese based in Richmond, and according to Johnson, it has no record of what happened to the bodies either.

Originally a Catholic sect called the Josephites, from Baltimore were sent south to establish schools and churches for Blacks. The Church was established by them in 1889 and then they bought the land in 1898 to create the cemetery for the mostly Black St. Joseph’s parish.

At least 140 or more people were buried at the site and Johnson has the name of each one of them from parish records. However, there are no records held by the city, other than a deed to the land.

Unlike state laws today, which require an application and technical supervision over the removal and reburial of graves, in the 1950s such laws did not exist.

Johnson said one option would be placing the remains in one of the cemeteries in Norfolk where Blacks were allowed to bury their dead, such as Calvary Memorial Cemetery.

Another question which inspires inquiry, according to Johnson, is where were Black people buried prior to the creation of the West Point Cemetery, the first one funded by the city as a burial site for Blacks?

Johnson and other historians have some clues.

When federal policy allowed the Union Army to enlist Black men for the United States Colored Troops (USCT), Norfolk was one of the few major cities in the South where Blacks could be recruited.

The city was under Union control and 1200 local Blacks served. They distinguished themselves at the battles of Chaffin Farms, New Market Heights, Fair Oaks, Dutch Gap, and the sieges of Petersburg and Richmond. Many were cited for bravery and awarded medals.

As these men passed away, the Black community searched for a burial solution that would recognize what they had sacrificed for the hope of a unified country.

The Norfolk Common Council authorized the burial of “people of colour” in a Potter’s Field located between Liberty, Scott, Hawke, and Cumberland Streets in Norfolk in 1827.

Black people lived in this and various portions of newly built residential and commercial units in Norfolk, including perhaps, part of today’s MacArthur Center Mall to Saint Paul’s Boulevard.

Not until 1873 was another Potter’s Field established for the exclusive interment of African-American citizens.

Known briefly as Calvary Cemetery, this burial ground was located at the west point of Elmwood Cemetery.

But Johnson will continue looking through the pages of ledgers and jogging the memories of those who still live for the final piece of the puzzle about “St. Joseph’s” Catholic Cemetery.

“I want to know what happened to those people,” Johnson said. “No one seems to be able to answer that question. Who moved them; how and where were they moved?”

“Looking back at the time, it seems that no one cared about giving these Black people a respectful burial,” he said. “One wonders what care was given to assure they were reburied respectfully or just thrown into some mass grave and covered over. There are some people who are disturbed that such questions are being asked. I am sure that descendants and family of these people would like to know.”