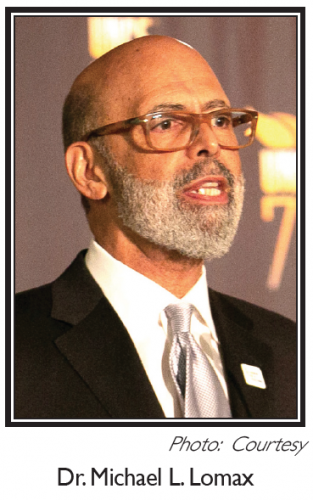 Nana-Ama Brookman, a senior at Virginia Union, said she wouldn’t be on the cusp of graduating with honors and with a degree in mass communications and criminal justice, if it weren’t for the United Negro College Fund.

When she started college, Brookman worked three jobs as she struggled to pay rising tuition and other costs, fighting to stay awake and keep up with her studies.

But, after receiving a scholarship from the UNCF, Brookman was able to focus more on her education and a little less on the side jobs. And, it’s paid off as she now sports a 4.0 grade point average.

“That was a game changer,” she said.

Brookman was among the attendees at a Capitol Hill luncheon where the UNCF issued its first “State of HBCUs Address.”

The organization, who for 75 years have championed the cause that ‘A mind is a terrible thing to waste,” also launched its HBCU Congressional Honor Roll.

A number of lawmakers and a host of HBCU presidents attended the event where Lomax called on federal policymakers to make significant investments in HBCU infrastructure and innovation, reform financial aid and evaluate regional accreditors’ treatment of HBCUs.

“We want our institutions to be vibrant, vital and strong,” Lomax said.

“We want our partners, federal and otherwise, to invest at a level that is not simply about surviving, but thriving,” he said.

During the luncheon where attorney and CNN political analyst Bakari Sellers served as master of ceremonies, UNCF officials and others outlined the benefits of HBCUs and the impact those schools have had.

HBUCs meet the needs of low-income, first generation students with 70 percent of enrollees considered low-income versus 39 percent at all other colleges.

The forerunner to good legislation is good education,” said South Carolina Republican Sen. Tim Scott, who spoke at the luncheon.

Virginia Democratic Sen. Tim Kaine said HBCUs have “persisted and thrived because your mission is right.”

“It’s not easy running an HBCU, there are challenges,” Kaine said, noting that his children’s teachers were products of HBCUs and they’ve become successful in part because of it.

Bennett College President Dr. Phyllis Worthy Dawkins also praised the UNCF for its role in helping raise $9.5 million over a 60-day period in a bid to help save the historic all-girls’ school’s accreditation.

Lomax promised that the fight isn’t over.

He also laid out the top priorities for HBCUs, noting that the country should invest more heavily in those institutions.

• A White House Initiative that should implement policies that increase the federal investment in HBCUs.

• Fully funded Title III HBCU Programs that would include $85 million in annual mandatory funding which would enable HBCUs to prepare more minority students for the workforce and economy.

• Annual discretionary funding for the strengthening of HBCUs Program should increase from Fiscal Year 2019 levels of $282 million to $375 million, the authorized level.

• Endowment Challenge Grants which would help HBCUs increase their self-sufficiency and build endowments that, today, are half the typical size of non-HBCU endowments.

“HBCUs are the engines that help power and deliver much-needed economic and workforce diversity,” Lomax said. “By that standard alone, our institutions are worth the federal investment we are asking for. During a time, when college is increasingly more unaffordable and student debt is growing, HBCUs continue to represent a tremendous value and opportunity for many students and families.”

Follow us
In this article:Address, HBCU, State of HBCU, UNCF